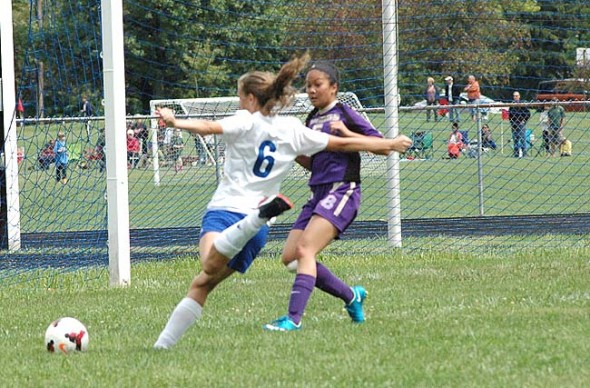 A ball on the verge of oblivion: Alaina Hoff (#6) takes aim in last week’s game against the Briggs High School Bruins. Although the Bruins scored first on a penalty kick, goals by Hoff and Jasmine Davidson in the second half propelled the Bulldogs to victory. (photo by Dylan Taylor-Lehman)

GIRLS SOCCER
“Frustrating their offense”
Last week, the Lady Bulldogs played two tough conference games on the road against Middletown Christian and the Miami Valley School. They returned home last Saturday for their first win of the season over the Columbus-based Briggs High School Bruins. Junior Hannah Morrison held down the net defensively as Bulldog freshman Lily Bryan, sophomores Jasmine Davidson and Greta Kremer and senior midfielder Alice Miller took several shots on goal but were unable to get them past the Bruins goalkeeper. The Bruins took the lead on a penalty kick with five minutes to go in the first half.

The Bulldogs came out impassioned and determined after half time. Morrison, now in the field after freshman Janine Stover took over in goal, brought the ball down the right side of the field and crossed it to Miller for a shot that was just wide of the net. The defensive unit of sophomores Evalynn Orme, Reese Elam and Amani Wagner and senior Ursula Kremer played together and pushed up to catch the Bruins off-sides multiple times, frustrating their offense. Early in the second half, sophomore midfielders Alaina Hoff and Madison Kellar took the ball forward and passed it off to Davidson who scored for the Bulldogs and tied up the game. Yellow Springs held off a determined Bruins counterattack through great unit play and distribution. In the 18th minute junior Dani Worsham came on the field in the midfield and Hoff moved up to the front line. A few minutes later Hoff capitalized on a pass back to the goalkeeper and scored the Bulldogs’ second goal. The final score was 2–1, Bulldogs.

The Bulldogs are now 1–4 for the season and face Troy Christian at home on Sept. 14.

BOYS SOCCER
Miami Valley trounced
YSHS boys soccer won their first conference game last Thursday, trouncing Miami Valley 5–1. Coach Ben Van Ausdal said that it was probably the Bulldogs’ best game of the season and that the Bulldogs’ defense did an incredible job holding one of the best players in the district at bay. The offense was good on the attack, he said; they came out on fire and dominated. Joe Plumer had two goals; Levi Jackson, Augie Knemeyer and Aaron Sherwood each had one. Hayden Orme, Levi Jackson and Kaner Butler all had critical assists.

The Bulldogs fell back in the following game, losing to Greenview 1–5. Van Ausdal said the team knew they were in for a fight going in, as Greenview is ranked #1 in the area and #8 in the state. The teams were tied 1–1 at first, but the team dynamics of Greenview counted for a lot. Van Ausdal said they have 10 starting seniors who have been playing together since they were freshman and their level of experience was apparent. “But I’m proud of my boys,” he said. “They played their hearts out.”

The Bulldogs are currently 2–2–1, and play their second conference foe, Emmanuel Christian, this week.

VOLLEYBALL
“The Bulldogs are playing really good volleyball right now”
The Bulldog Varsity Volleyball team likes to make things exciting, and there was no exception to this rule when the Xenia Christian Ambassadors came to YSHS to play on Sept. 12. The Bulldogs lost the first game against the Ambassadors, which prompted them to seek revenge in the second and third games, winning both of them.

The gym was loud and hot as fans cheered on the Bulldog players, but alas, it wasn’t enough to pull out the fourth game. The match was tied, and so the fifth and deciding set was the most exciting game of the evening. Xenia Christian took control of the game early and held on late, bringing the score to 11–14. With Bulldog Elle Peifer firing a kill down the line to get the side out, YSHS served to even the game up at 14–14. The Ambassadors were able to side out on an out ball by the Bulldogs but then couldn’t control their serve, which brought the game to an even 15–15. With Bulldog Elizabeth Smith going back to serve, XC hit the ball long. Smith served again. The serve was returned by XC and picked up and set to Meredith Rowe, who smashed the ball to the middle of the court for the win. Alex Ronnebaum made her freshman appearance and wowed fans with 10 kills and 6 blocks. Final scores were 19–25, 25–21, 25–23, 22–25, 17–15.

In their previous game, YSHS traveled to Dayton Christian on Sept. 10 to win easily in just 3 games, 25–15, 25–12, 25–7. All the varsity players were able to leave their mark on the Warriors with every one of them coming up with kills. Kasey Linkhart led the team with 18 points, 4 aces and 16 assists, followed by Elle Peifer with 12 points and 4 kills. Meredith Rowe had 7 kills, while Alex Ronnebaum had 6 kills, 3 blocks. Payden Kegley was able to come away with 6 digs, while Julian Roberts helped out with 10 assists, Madeline Neilsen had 4 blocks and Nia Stewart had 1 kill that evening.

The final game of the week had the Bulldogs traveling to Ponitz High School to take on the Golden Cougars. It seemed to be an early morning for the Bulldogs but they came away with the win 25–18, 17–25, 25–22, 25–13. Meredith Rowe led the Bulldogs with 14 points, 8 aces, 17 kills and 6 digs. Not to be outdone, Kasey Linkhart, Elle Peifer and Elizabeth Smith each racked up 9 points (5 aces, 1 ace and 6 aces, respectively), contributing to the win.

“The Bulldogs are playing really good volleyball right now,” said coach Christine Linkhart. “I’m really proud of the teamwork they are displaying and how positive they are on the court!”

The Bulldogs now have a record of 7–4 (3–0 in Metro Buckeye Conference).