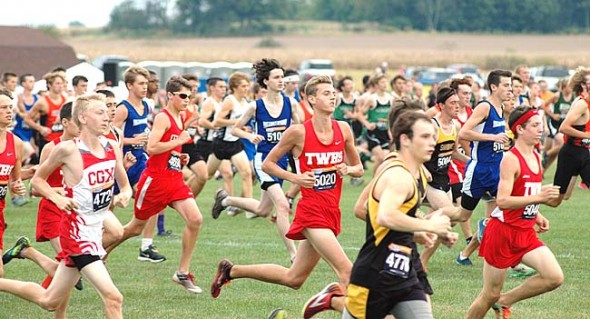 CROSS COUNTRY
“More mental than physical”
Yellow Springs Cross Country traveled to the rolling hills of Cedarville to compete against area teams at the Friendship Invitational on Saturday, Sept. 19. The Bulldogs proved once again they can run with the best of them. The News caught up with freshman Zach Lugo (5107) and sophomore Mark Runyon (5110) to discuss the mental and physical fortitude necessary to run a 5K.

“It really is more a mental thing than it is physical. Most people can do t; you just have to have the mindset, and that mindset is determination and motivation,” said Lugo.

Schools score as a team in cross-country meets, but running a race is a mind game played by the individual.
“You’re in your head the entire race, especially the ending,” said Runyon.

Lugo explained the starting process and the shifting levels of awareness that span the race. “You usually want to start out at a quick pace, faster than the majority of your race pace, to get yourself a good spot,” he said. “You’re thinking about your surroundings — who’s around you, who you pace with — and for the rest of the race, you’re sticking with those people. You’re remembering faces, numbers, backs of heads; you’re constantly thinking about who you were with from the start, who you’re with in the middle, and then towards the end, who you can speed up and boost past.”

The strategy for the last 100 meters, the point where runners have a straight path to the finish line, is to go as fast as you can. Runyon explained that runners have to time the use of their energy exactly right, so a sprint can be kept up until the finish and the runner doesn’t pass out fifty meters before the end.

“At the very end, it’s mind over matter more so than ever,” said Lugo. “It’s crazy.”

VOLLEYBALL
Bulldog Varsity true to form
The Bulldogs varsity volleyball team made the night exciting once again when they hosted the Emmanuel Christian Lions on Tuesday, Sept. 15, at YSHS. Going into the match, both Yellow Springs and Emmanuel Christian were undefeated in the Metro Buckeye Conference, with 3–0 records apiece.

The Bulldogs won the first two games easily against the Lions, but the Lions seemed to wake up in the third and fourth games and put up quite a fight. They were close games but the win came down to the fifth and final match in which the Bulldogs were up 14–9. With only one point needed to secure the win, the Lions were able to serve their way back into the game to tie it up at 14–14. The Bulldogs sided out the ball with a kill and Elizabeth Smith served up the final point for the 16–14 win. Both teams battled hard but Yellow Springs was able to come away with the win, 25–11, 25–16, 20–25, 22–25, 16–14.

“Each team member once again contributed in their own way to win this game. They each have their specialties and they each used them tonight!” said coach Christine Linkhart.

Middletown Christian hosted the YSHS Bulldogs on Thursday, Sept. 17, for the Bulldogs fifth conference match this season. The Bulldogs held off the Eagles with relative ease winning the match in just three sets, 25–7, 25–13, 25–18. Kasey Linkhart and Julian Roberts each had 13 points and 3 aces against the Eagles along with 13 and 7 assists, respectively. Alex Ronnebaum played a great game with 11 points, 3 aces, 7 kills and 9 blocks. Senior Madeline Neilsen had 5 points and put down 8 kills along with Elizabeth Smith, who also had 8 kills. Elle Peifer kept up her steady play with 2 points, 3 kills, 1 dig and 13 passes.

On Saturday, Sept. 19, Dayton Christian came to YSHS for another conference match-up. The Bulldogs took the match in just three games, 25–16, 25–14, 25–17. Freshman Alex Ronnebaum led the team with 10 points, 4 aces, 5 kills and 6 blocks. Elle Peifer followed up with 8 points, 1 ace, 3 kills, 1 block and 3 digs. Meredith Rowe and Madeline Neilsen helped seal the win with 7 points and 2 aces each. Rowe had 11 kills on the day as well as 10 digs. Yellow Springs stands undefeated at the top of the MBC league at 6–0 and is 10–4 overall.

JV players “earning points on kills”
The YSHS Junior Varsity team played Emmanuel Christian at home on Tuesday, Sept. 15, beating them soundly 25–15, 25–11. The Bulldogs played strong as a team with almost every player earning points on kills against the Lions. Kelsie Lemons led the team with 15 points, 5 aces and 2 kills. Kayla Brown and Dy’Meisha Banks added to the Bulldogs totals with 5 points each. Ayanna Madison also had 5 assists for the Bulldogs.

On Thursday, Sept. 17, the Bulldogs traveled to Middletown Christian to play the Eagles. The JV team won the match in two sets, maintaining control for most of both sets. The team was led in points, once again, by Kelsie Lemons with 16 points, 9 aces, 5 kills and 1 block. Raven James followed with 5 points, 2 aces, 2 kills and 2 assists. Aliza Skinner and Danny Horton, who each had 4 kills, were helped out by setters Ayanna Madison, Amani Wagner and Nia Stewart, who each had 4 assists. Dy’Meisha Banks kept the team alive with 9 digs on the evening. The Bulldogs are now 4–6.