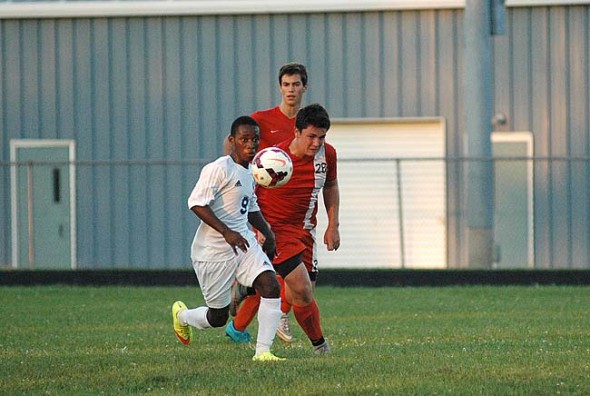 Junior Levi Jackson thinks on the fly as he follows the ball’s trajectory in the Bulldog’s home match last Saturday against the Waynesville Spartans. Coach Van Ausdal says the Bulldogs have “very strong chemistry — they want to win as a team.” The Match ended in a 2–2 tie. (Photo by Dylan Taylor-Lehman)

The ups and downs of battle

After squashing Columbus International 6–1 in their first game of the season, the Bulldogs felt the more stinging side of competition as they fell to Cincinnati’s Roger Bacon High School on Sept. 2. The score was a decisive 0–5.

“Was I disappointed?” said coach Ben Van Ausdal. “Yes. We didn’t finish some opportunities we had.”

But the score doesn’t tell the whole story, he said, citing a few of Roger Bacon’s missed wide-open shots and a missed penalty kick. Overall, he said, “it was just one of those games. It was a good learning experience.”

The Bulldogs kicked their way back to glory in the most recent game against the Waynesville Spartans. The Bulldogs “dominated the first half,” thanks to the expertise of the defense and the return of Henry Potts-Rubin, who has recovered from an injury.

“You can tell he’s back,” Van Ausdal said.

Joe Plumer scored the first goal, with an assist by Keanan Onfroy-Curley. The second was a penalty kick scored by Augie Knemeyer. Despite a handful of “silly, young team mistakes” that led to a 2–2 tie, Van Audsal said he was very happy with how the boys played. “They fought their hearts out to the last whistle,” he said, “and that’s what I’m looking for.” The Bulldogs’ record is currently 1–1–1.

“YS decided they were in charge”

When the YSHS volleyball teams traveled to Fairborn High School on Monday, Aug. 31, they had no idea of the battle that would take place that night. After coming out sluggish in the first game, the Bulldogs gave the Skyhawks almost more than they could handle in the second. They fought point for point, every player giving it her all, and only narrowly lost. The Bulldogs had momentum going into the third game and won it easily. The fourth and final game of the match had both teams trading side outs until the Skyhawks found their stride and pulled away. Fairborn came away with the win (14–25, 24–26, 25–19, 14–25), but the Bulldogs made them earn every point.

“I’m more than happy with how my team played against Fairborn,” said coach Christine Linkhart. “They really took control of the games and played as a team. This is the best volleyball they have played so far!”

Kasey Linkhart led the team with 10 points, 2 aces and 10 assists, while Meredith Rowe put down 10 kills with 5 points, 2 aces, and 4 blocks. Payden Kegley had 11 digs and Elle Peifer had 9 points, 2 aces, and 5 kills. Elizabeth Smith led the pack with 5 blocks and 4 kills, and Madeline Neilsen crushed 4 kills with 2 blocks. Julian Roberts added 6 points, 1 ace and 5 assists to the team’s totals.

Troy Christian came to YSHS on Sept. 3 for the Bulldogs’ first conference game of the season. The Eagles came out strong but couldn’t hold on — the Bulldogs won the first game 28–26 and took charge in the second 25–17, with Elizabeth Smith earning 8 of her 21 points of the night. The third game went to the Eagles (19–25) as the Bulldogs caught their breath, but the Bulldogs took the final game 25–20. Every team member contributed her fair share to the win as the Bulldogs evened their record at 4–4 (1–0) in the league.

Yellow Springs High School was represented by a lone golfer at the Metro Buckeye Conference Tournament on Tuesday, Sept. 8. Kyle McAnerney shot 56 on nine holes. Coach John Phillips said the rest of the team “is still figuring out what’s going on” in terms of whether they want to play or not.

Fairborn Community Park was the site of the Bulldogs’ second cross-country meet of the season on Wednesday, Sept. 2.