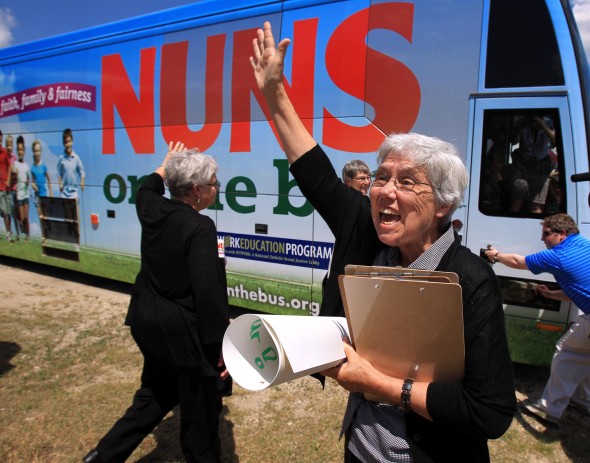 Sister Mary Wendlen, one of four nuns on a 2012 "Nuns on the Bus" tour, waves goodbye to supporters in Fox Lake, Ill.

Nuns on the Bus, a group of Catholic nuns speaking out on issues of social justice, will be traveling to Washington D.C. to hear Pope Francis’s message to Congress. As part of the month-long focus on climate justice in Yellow Springs, the nuns will make a stop here for a potluck dinner and short discussion at the Senior Center on Saturday, Sept. 19, 5–7 p.m.

The nuns began their voyage on Sept. 10 in St. Louis, Mo., with plans to stop in Kansas, Nashville, Cincinnati, Yellow Springs and Columbus on their way to a rally on the Mall in Washington, D.C., where the Pope will deliver an historic speech to the Senate and House of Representatives at a joint session of Congress on Sept. 24. According to a Catholic News Agency story published online Sept. 11, his message is expected to relate to the social ramifications of climate change he wrote about in his encyclical, “Laudato Si,” meaning “Praise be to You,” published on June 18. Pope Francis is also expected to talk about climate change and social justice at an address to a United Nations Special Summit on Sustainable Development in New York on Sept. 25.

Last Friday, Sept. 11, at a meeting in Vatican City sponsored by the Foundation for Sustainable Development, Pope Francis was quoted as saying that the issue of climate change “is a matter of justice; it is also a question of solidarity, which must never be separated from justice,” he said, adding that the dignity of each person, “as peoples, communities, men and women, is at risk.”

The Nuns on the Bus tour is called “Bridge the Divides: Transform Politics.” The goal of the spiritual group is to use personal stories to guide and motivate the development of “solutions that meet the real needs of people.” The group gathering in Yellow Springs this week plans to gather stories from local residents to take with them to Washington.

According to its website, Nuns on the Bus is a campaign of NETWORK, a national Catholic social justice lobby founded over 40 years ago to promote global justice and peace through education and social transformation. In the summer of 2012, NETWORK organized the first “Nuns on the Bus” tour through nine states to protest the effects of cuts to federal safety-net spending proposed by Congressman Paul Ryan. The group has since traveled for comprehensive immigration reform, to encourage particpation in the electoral process and to support fair tax policy, comprehensive immigration reform and a host of other social issues.

One Response to “Share stories with Nuns on the Bus”