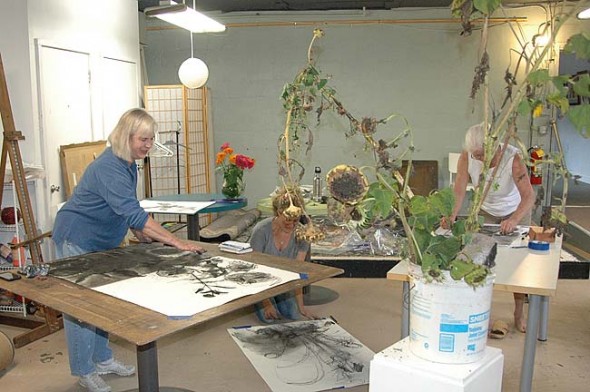 From left, artists Christine Klinger, Jennifer Rosengarten and Dennie Eagleson captured sunflowers in charcoal at an art sampler class taught by Rosengarten at the Yellow Springs Arts Council (YSAC) last Sunday, Sept. 20. The class drew its inspiration from “The Sunflower Show,” now on display at the YSAC gallery. (Photo by Audrey Hackett)

Come with me
into the field of sunflowers.
Their faces are burnished disks,
their dry spines
creak like ship masts,
their green leaves,
so heavy and many,
fill all day with the sticky
sugars of the sun.
—From “The Sunflowers,” by Mary Oliver

Does anyone really need coaxing to wade into a sunflower field? The rows of cheerful faces, all the same at first, like faces in any crowd, call you in, and then you realize that what’s true of snowflakes is also true of sunflowers: no two are alike.

No two artistic responses to sunflowers are alike either, if “The Sunflower Show,” now open at the Yellow Springs Arts Council gallery, is any guide. Several dozen pieces in a wide array of media reflect not just the diversity of these friendly flowers, but the whimsical, deeply personal ways local artists see and evoke their forms, textures and mood.

“I’m thrilled with the richness of the show,” said Krista Magaw, executive director of the Tecumseh Land Trust, which collaborated with the YSAC to organize the exhibit. Magaw herself has two pieces on display, both created using the flowers’ dense seedheads to make prints.

Magaw will lead a kids’ activity exploring this innovative printmaking technique on Sunday, Sept. 27, at the opening reception. The reception will be held from 2 to 4 p.m. at the YSAC gallery on Corry Street. About half of the participating artists will be on hand to discuss their work, Magaw said.

“The Sunflower Show” grew out of last September’s Paint-Out, an outdoors painting event at Whitehall Farm organized by Yellow Springs artist Jennifer Rosengarten as a collaboration between TLT and the Dayton Visual Arts Center. Several pieces in the show were created at the event.
“We had about a dozen people painting that day,” said Rosengarten in a recent interview. “But because people love to watch artists, there were tons of people in the field enjoying the experience.”

Rosengarten’s own painting from the Paint-Out is included in the show. Done in oil on panel, the work is exuberant, a riot of color and line. Other works explore the careful patterning of sunflower petals or planted rows; Rosengarten’s exults in the wild tangle underneath.

“It’s characteristic of my work to be right in it,” Rosengarten said. “I want to experience the life force of the thing.”

Other pieces in the show, though not painted at last year’s Paint-Out, were inspired by or created in the same field. Located just north of Yellow Springs on Route 68, the Whitehall Farm sunflower field has become a local landmark — a destination for some, a serendipitous find for others passing through.

The field was first planted around 2003, recalled Sharen Neuhardt, who owns Whitehall Farm with her husband, Dave. The farm is under the preservation of TLT, which mobilized the effort to help save the 940-acre property in 1999. TLT’s offices are located on the farm.

“We love that the field is so identified with Tecumseh Land Trust,” said Neuhardt recently. TLT has sponsored an annual sunflower photography contest since 2012. Details about the 2015 contest will be forthcoming, Magaw said.

As will this year’s sunflowers. “We planted late this year,” Neuhardt explained. Rain, sun and seed variety are some of the factors, as well as planting time, that determine when the field blooms, she said.

“We’ve proven ourselves not to be good prognosticators” of bloom time, she said. But she was willing to venture a guess for this year’s crop: “Our prediction is next weekend.”

Neuhardt got the idea to plant sunflowers from seeing a sunflower field at nearby Fulton Brothers Farm. “Dave and I joke that owning a farm is an exercise in how many ways you can lose money,” she said. “At least this way is making people happy.”

Local farmer Jim Clem, who is a TLT trustee, has planted the sunflower field since the idea’s inception. He initially did so “out of the kindness of his heart,” said Neuhardt. “He was humoring me.” (Clem farms the rest of Whitehall’s acreage, as well as other area farms.) But he’s been won over by the flowers and the enthusiasm people bring to them, she said.

The field is 11 acres and supports a staggering 300,000 to 400,000 sunflowers. It was originally a hay or alfalfa field, said Neuhardt. Its rebirth as a sunflower field carries both aesthetic beauty and a crucial message, she added.

“We love the fact that it makes people understand the value of farms,” she said. “If we only had parking lots … we’d have no sunflower fields!”

This lack would certainly be felt by the artists of “The Sunflower Show.” Despite differences in media and approach, there’s a shared sense of joy in the beauty of these most open-faced and expressive of flowers.

“It’s all a celebration,” said Dennie Eagleson, a Yellow Springs artist who, with artist Dianne Collinson and TLT’s Carol Simmons, prepared the show. Eagleson also has two works in the show, Lumen prints, a hybrid of photography and printmaking in which materials (in this case, a smaller variety of sunflower) interact with photographic paper and the sun to make a print.

“I think of it as plants making drawings of themselves,” she said.

Letting the land speak through local residents’ creative responses to it has become a significant element of TLT’s mission, said Magaw. Through events like photography contests, last year’s Paint-Out (another one is planned for next year), poetry readings and essay contests, “we try to give people as many ways as possible to touch and share the natural world,” she said.

Rosengarten believes that events like the Paint-Out help people “appreciate the land for [attributes] other than what we can take from it.” Conversations about land use seldom consider beauty. Yet for a field of sunflowers not under commercial cultivation, “being beautiful is its use,” she said.

When this year’s sunflowers do turn their “burnished disks” to the sun, the yellow splendor will likely last about two weeks. YSAC’s “Sunflower Show” will be up only a bit longer, until Oct. 11. Consider yourself coaxed.

Visit ysartscouncil.org or call 679-9722 to learn more. Check the TLT Facebook page for bloom information and details about this year’s sunflower photography contest.