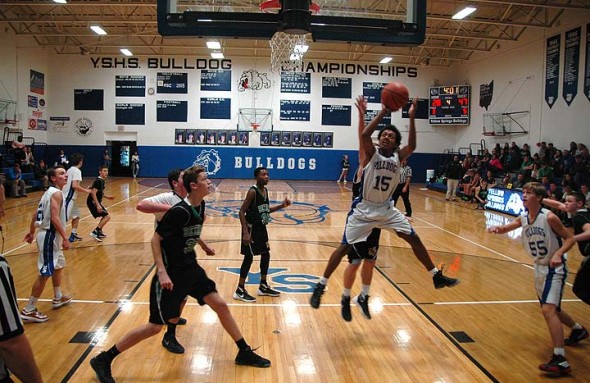 YSHS was the site of a rare triple-header on Saturday, Dec. 19, when the JV, the Lady Bulldogs and the boys basketball teams consecutively played the Bethel Bees. The gym was abuzz with excitement, as fans and rabid supporters of all three teams shouted together for the glory of the Bulldogs. Bethel cheers were cut short more than a few times, when the cheerleaders’ incantations to M-I-S-S ended mid-sentence as Bulldog free throws sank unimpeded by any hex. The triple-header was one of a number of exciting games that unfolded this week, all of whose critical details are examined below!

Basketball
Girls
The Bulldogs traveled to battle the Dayton Christian Warriors in a conference game on Dec. 17. Despite junior Elizabeth Smith’s 25 points (shooting 32 percent) and senior Molly Hendrickson’s five blocks, YSHS succumbed to the power of the Warriors and lost 48–37.

Playing a game sandwiched between the JV and Varsity bouts, the Lady Bulldogs fought the Bethel Bees on Dec. 19. Sophomore Ayana Madison scored six points, Hendrickson scored eight and Smith posted up 24 points. Freshman Sydney Trimbach attempted to tough her way through the game and racked up five personal fouls. Ultimately the Bulldogs were stung by the Bees and narrowly lost 50–46.

Most recently, the Bulldogs tangled with the Troy Christian Eagles, traveling to the Eagles’ aerie on Dec. 21. Smith again led the charge with 13 points, with sophomore Gracie Price adding nine and junior Julian Roberts seven, two of which were free throws. Smith, Madison and sophomore Jasmine Davidson pulled down six, six and four rebounds respectively. Nevertheless, the Eagles dug their talons into the Bulldogs, resulting in a 51–31 loss for Yellow Springs.

Boys
YSHS played Dayton Christian on Dec. 18, beating them on their home turf 59–46. Kaner Butler and Devon Perry were on fire, scoring 18 and 14 points respectively. Butler also led with three blocks and eight rebounds.
The varsity Bulldogs closed out the evening of Dec. 19 with yet another victory, this time a 71–64 win against the Bethel Bees. Isaiah Taylor pulled down 11 rebounds, with Kaner Butler scoring 19 points and Ethan Dewine 15. The Bulldogs now have a record of 6–1 after the game against the Bees, with a 4–0 conference record.

Swimming
Yellow Springs’ aquatic competitors competed in their first meet of the season on Dec. 20 at the Bethel Invitational swim meet, hosted by the New Carlisle Sports Club. Sixteen out of YSHS’s 25 swimmers swam at the meet, competing in 22 of the meet’s 24 events.

Combined YSHS girls and boys scores earned them second place at the meet.