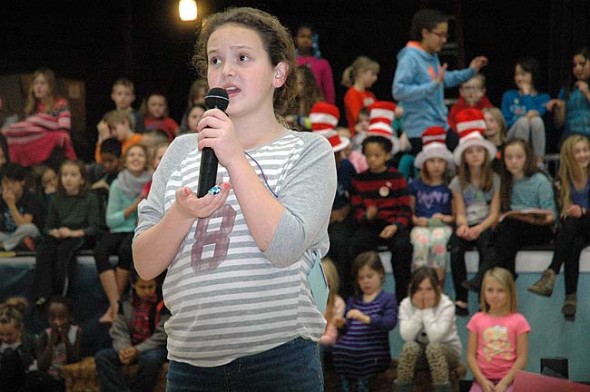 Eliza Minde-Berman, aka Horton the Elephant, vows to protect Who, the “tiniest planet in the sky,” as well as hatch an egg against all odds and ridicule. Mills Lawn School’s production of Seussical Jr. runs Friday and Saturday, Dec. 11 and 12, at 7 p.m., at Central State’s Paul Robeson Auditorium. Tickets are limited as the cast of hundreds all have relatives. (photo by Carol Simmons)

Oh, the thinks you can think
When you think about Seuss!

Dr. Seuss, that is. Born Theodor Seuss Geisel, and the author and illustrator of more than 60 books, most notably for children, Dr. Seuss inspired readers’ imaginations with his whimsical words and images. A selection of those tales, featuring some of his most beloved characters, served as inspiration for the 2000 Broadway musical “Seussical,” which in turn inspired a shorter, one-act production — “Seussical Jr.” -— for school and youth productions.

Music teacher Jo Frannye Reichert is producer and director, and she makes clear that while modifications have been made to suit this production, they fall within the show’s contractual requirements. The main adaptations, she said, came in developing roles for about 130 featured performers in a show that was written for less than half as many.

The all-school musical ideal has become something of a Mills Lawn tradition that dates back to 1998 and a production of “Joseph and the Amazing Technicolor Dreamcoat.” Since then, the school has mounted a new production every two to three years. The last one, an homage to 1940s radio, was mounted in 2012. Reichert, who produced that show as well, said that about 130 students turned up in September to audition for a featured part in “Seussical Jr.”

“And every one got cast in some way, shape or form,” she said. “I take a show like this and carefully expand it. There’s the Cat in the Hat, and Cat A, B, C and D; the Sour Kangaroo became Sour Kangaroos; and a trio of monkeys became a dozen.”

A person’s a person, no matter how small.

Every student participates in some way. Students who didn’t try out for a feature role still sing in the chorus. About 20–30 students help with tech, under the guidance of parent and theater professional Ara Beal, but they also take their turn in the chorus as well. Every student in first through sixth grade gets time on stage, Reichert said.

The first and second graders will open the weekend performances with an adaptation of “One Fish, Two Fish.” What’s more, their song “Super Supper Man” ties into the first-grade’s project-based learning unit on eating and nutrition, Reichert said.

The district’s new project-based learning focus has influenced the production in a number of ways, Reichert said. For example, some of the dance choreography was “based on a yoga PBL,” and “the kids were much more involved in off-stage production [elements].” Students have helped with set-design and construction; they’ve worked on costumes; and they’ve designed programs and posters. For the programs, they looked at the official contracts as part of ILE class, to learn what information was required to be listed and where.

“Even our T-shirts were designed by kindergarten artists,” Reichert said.
Community support also played a part in getting the show ready, she added, noting that Antioch University Midwest brought in teaching professionals from Dayton Contemporary Dance Company “who talked to them and expanded their thinking on dance and movement.”

“It’s a very large undertaking,” Reichert said, but the benefits are huge. “I enjoy seeing the pride that the kids get out of their work — and to see friendships develop across grade levels.”

Parent volunteer Ara Beal, who is the executive director for YS Kids Playhouse, agrees with the endeavor’s importance.

“One of my favorite things about doing theater with young people is that it teaches them that the sum of their efforts is so much larger than they can do as individuals,” she said.

Sixth-grader Emil Wagner, who plays the Cat in the Hat, is enthusiastic about the show, even after a 90-minute, after-school rehearsal. “It’s a very exciting play,” he said. “I like how everybody gets a fair chance. It’s a really fun experience.”

Performances will begin at 7 p.m. Friday and Saturday, Dec. 11 and 12, at the Paul Robeson Performing Arts Center on the Central State University campus. With a potential audience of 340 families, tickets are limited. Call Mills Lawn School, 767-7217, for more information.