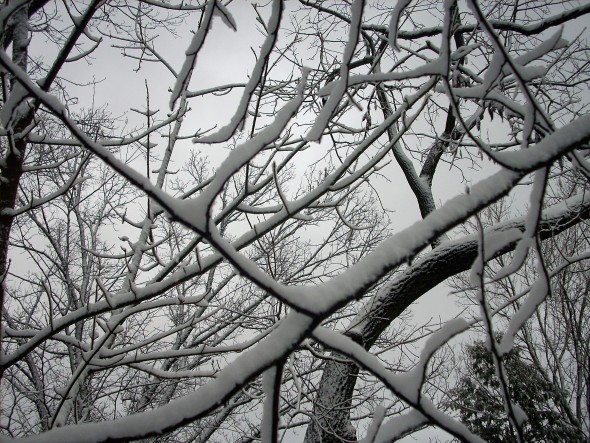 A backyard game of Tic-Tac-Toe, and tree wins with a snow-crossed "X." (Photo by Audrey Hackett)

BLOG— The radical reality of snow

The year’s first snow just fell, an inch of white softening some things, sharpening others. On tree limbs, snow highlights form; on trashcans, snow mellows it. On roofs, it creates new and shining lessons in geometry. Snow is the great equalizer, I think. Everything improves under its drape. And everything is one.

Snow is an artist of great attention. Overnight, it drew perfect circles on the rims of our empty flowerpots. It chalked a fat line across the pitchfork’s handle, and dusted every rusty tine. It traced lattices and railings. Where the railing twisted, it marked the twist with a pause of white, the way a magic marker in a child’s fist blots where she stops, then flows where she draws anew.

Snow is also a milliner. It capped — well, everything it could cap: fence posts, clothespins, tree stumps, the simple logic of the gate latch. Every weed in our yard wore a miniature Russian hat. It was as if a small occupying force from the north had slipped in. They were gentle occupiers, though; all day, they did nothing more than gaze at us from under the low brims of their high, fluffy hats.

Snow might be a cover-up; snow’s reputed to be a blanket; snow could be accused of sweeping much under its white rug. But I think it’s a great revealer. If you ever doubted the loveliness of a trashcan, snow shows it to you. In our old house, I once looked across the street to a snow-topped mound of green and wondered why I’d never noticed the neighbors’ side-yard yews. A second glance overturned the impression, but the revelation lingered. What if snow was showing me how lovely a trashcan could be — how lovely it really was?

Sometimes snow doesn’t melt so much as loosen, like soft folds of skin. The backyard snow was looking a little baggy by noon, patchy by 3. Then lightly, very lightly, it began to snow again, to fill in the gaps, perhaps. I remember as a child finding just the right pressure and direction and attention that allowed my colored pencil to evenly fill a shape — maybe the whole blue sky. The snow seemed to be attempting something like this, playing with its own variables of rate and size and slant.

But the clatter on the roof, late morning on this first snowy day, wasn’t snow. It was starlings, sounding like hard rain. Looking out our second-story window, my husband and I saw one, two, 10, 20 dive from the roof and rocket to the walnut in our yard. It’s not often that I’m at flight level — or rather, just underneath it. Was I part of the flock? The moment was quick, yet indelible. I thought of a poem by James Schuyler, “In Wiry Winter,” which ends: “The bird goes / quick as a wish / to swim up / and cast, like / it, a shadow / on the years.”

If snow is epiphany, snow is also anti-epiphany. The first reversal happens on the roads. Snowy roads are a hazard, of course, so there’s sense in melting the danger away. But what’s left is bare and raw and aggressively ugly, wounds in the wonderland. By afternoon, though, I saw that the roads were merely wet in spots, wet the way a starling looks, in fact, its feathers oddly slick. And the roads shone with starling color, too, balanced on the border of black and brown and yielding to every subtle reflected tint. Suddenly I realized: the reversal had reversed itself, and the world was sneakily beautiful again.

This pleases the poet in me. But there’s a risk to seeing things this way, I think. The Tao Te Ching, in Stephen Mitchell’s translation, says: “When people see some things as beautiful, / other things become ugly. / When people see some things as good / other things become bad.” May we (or must we) instead see everything as beautiful? I don’t think so, no. The counter, I believe, is just to see things. Just to look.

That’s the gorgeous (oops!) and radical reality of snow. It falls. It falls everywhere it falls. Even our tiny Christmas lights, bulbs barely bigger than summer’s lightning bugs, got a bit. You could almost count their dusting in flakes. Snow fell on hubcaps, on shriveled hostas, on stones and the hard earth between stones. Snow tied it all together. Snow, like a single, sweeping look, made everything mesh.

Under its long white glance, the world isn’t this or that. The world just is. That’s the comfort, not a cold one, of snow.