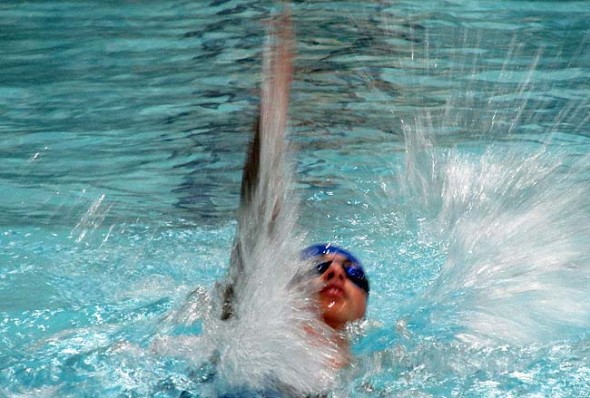 Swimming
Chick sets most records
Yellow Springs High Schools’ most aquatic athletes competed last weekend in the largest swimming and diving meet in the country. Almost 3,000 swimmers from 124 schools from southwest Ohio took part in the 33rd annual Southwest Coaches Classic over Saturday and Sunday, Jan. 16 and 17. Preliminary races began at 8 a.m. and were held at a number of locations in the Cincinnati and Dayton area. Finals were held each night at 6:30 p.m. at the Keating Natatorium at St. Xavier High School in Dayton. Only the fastest 16 swimmers from the eight preliminary rounds moved on to finals.

The Yellow Springs Bulldogs had exceptional results in this year’s classic, said Coach David Hardwick. Seventeen students competed in 39 events, six of these being relays. Many school records, seasonal bests and personal records were set in these two days of challenging swimming, Hardwick said.

First, the school records: Olivia Chick garnered the most school records, breaking her own 50 freestyle (FS) from last year with a time of 24.49 seconds, and her own 2014 100 backstroke time with 59.32 seconds, shaving off almost 3 seconds. Chick also broke her sister Erika Chick’s 200 backstroke record, setting the new record at 2:08 minutes.

Aman Ngqakayi, swimming for the boys, swam in his first Coaches Classic. He broke Scott Bradley’s 200 FS record with a new time of 1:48 minutes.

Chick scored big by the end of the weekend, as she placed Top 8 in all four of her events. She placed third in the 100 FS, fourth in the 50 FS, fifth in the 200 backstroke and eighth in the 100 backstroke. She alone scored 56 points, helping to rank Yellow Springs High School 18th out of 46 Division I and II teams.

Ngqakayi placed 13th and 14th in the 100 and 200 breaststrokes, respectively. He scored 7 points for the Bulldogs, ranking 30th out of 41 Division I and II teams.

Right now swimmers are beat up, unrested and unshaved following holiday training schedules, Hardwick said, and the Coaches Classic whips them back into shape. The Classic is a prelude to the upcoming Ohio High School State Tournament, which begins in February, he said, and is used by coaches and swimmers to gauge where they are against the rest of the field before the tournament begins.

Basketball
Boys show well
YSHS boys basketball had a remarkable showing on Friday, Jan. 15 as they more than doubled the total score of opponent Middletown Christian, beating them at home 69–34, allowing their opponents only five points in the second quarter.

However, as life and sports are wont to do, the tables were turned and the same ignominy befell the Bulldogs at the Flyin’ to the Hoop invitational, held on Jan. 17 in Dayton. The Bulldogs played the Northridge Vikings in what was advertised as “Number 2 ranked event according to CBS,” in front of a crowd of up to 20,000 people and 100 members of the national media. Unfortunately the setting was not conducive to certain victory, as the Bulldogs lost 63–31. Kaner Butler and Tony Marinelli pulled down 14 and eight points, respectively, during the game.

Girls fight on
The YSHS Lady Bulldogs also played two games recently, the first of which was also against Middletown Christian. They hosted Middletown for the game on Jan. 14 and lost 61–24.

Two days later the team fought anew against geographic rivals Cedarville, traveling to their turf on Jan. 16. The Bulldogs lost, 58–32.