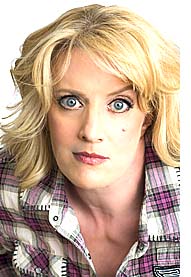 Elizabeth Griffin, an Antioch School parent and the school’s development coordinator, says she can’t overstate the importance of the annual Auction Gala & Comedy Show to the school’s educational mission.

Proceeds from the event go to support the private school’s scholarship fund, which in turn assists more than half the students who attend the small, independent day school founded in 1921 and located since 1953 on the edge of the Antioch College campus.

“Antioch School is supposed to be available to as many children as possible,” Griffin said. “That’s why we work so hard [on making the auction a success].”

In its 20th year as an auction event, and its fifth including a comedy show segment, this year’s gala will be Saturday, March 5, at the college’s Foundry Theater. Festivities begin at 6 p.m. and will include both silent and live auction components, hors d’oeuvres by Current Cuisine, an open wine bar, dessert and a performance by nationally touring comic Suzanne Westenhoefer.

A native of Columbia, Penn., Westenhoefer has been in the comedy business for 25 years, appearing on “Sally Jesse Raphael,” Comedy Central’s “Short Attention Span Theater” and “The Late Show with David Letterman,” according to her press biography. She’s also hosted her own HBO comedy special and created several GLAMA award-winning comedy shows, including “Nothing in My Closet but My Clothes,” “I’m Not Cindy Brady” and “Guaranteed Fresh.” Openly gay from the beginning of her career, she has appeared several times regionally as the featured performer at the annual Dayton Pride Dinner.

Griffin said Westenhoefer’s auction performance continues the event’s precedent of presenting strong, diverse comedians, many of them women. “We’ve had this really great run,” she said.

This year’s event will be the second year in a row at the Foundry Theater. “It’s a great space,” Griffin said, “And it’s so nice to be there with our connection to Antioch College.”

The Antioch School’s “founding father” in 1921 was then College President Arthur Morgan. His goal, in addition to creating a strong educational model, was to provide a hands-on teacher-training laboratory for Antioch College students. The school is now one of the oldest alternative schools in the country.

While the school’s organization has evolved over the decades, its experiential and child-centric philosophy has remained central to its mission. With about 55 students enrolled this year, the school continues its long-standing tradition of no homework, no tests and no grades.

“It’s such a unique educational model,” said Griffin, whose daughter, Selah, is doing an experimental seventh-grade year there. A K–6 institution for most of its history, the school has been exploring in recent years the possibility of extending its offerings. Griffin’s son, Carter, an Antioch School alum, is now attending Stivers School for the Arts in Dayton.

“Both of my children have absolutely loved it,” Griffin said of their time at the Antioch School. They’re not alone in that feeling, she added. “One of the things I do as development coordinator is reach out to alumni. I am continually struck by how many credit the Antioch School for the path they chose in life and as being what really shaped them as active learners.”

Making this educational model available to as many children as possible makes the school’s scholarship fund important, Griffin said. “I think a lot of people think this is a private school, so they can’t afford it,” but financial aid as well as parent volunteer hours help make it possible.

According to school information, tuition for a full-time student this year is $9,003, plus $500 for supply, snack and activity fees. The tuition for a second child is $7,934, plus fees.

Griffin said that auction organizers hope to net at least $30,000 from this year’s event.

About 100 items will be featured in the silent auction part of the evening, Griffin said. “A lot of our items were donated by local stores,” she said. “There are also a lot of handmade items from local crafters and local artists.” Health and wellness-themed items, such as massages, are also featured, she said.

The live auction, to be overseen by auctioneer Doug Sorrell, will feature such big ticket items as a five-night stay in St. Croix, a three-night stay at Northport Inn in northern Michigan and a Antioch College Wellness Center package.

Another part of the evening’s festivities is a raffle for four, round-trip, Delta airline tickets to anywhere in the continental U.S. Raffle chances are $20 each or six for $100. Five hundred chances are available.

“For me, it’s a pretty fun event with all the food, and the items and the people,” said parent and volunteer Matthew Moon, whose son Elijah is in kindergarten this year. Last year was the father’s first auction. He joined the auction committee this year.

“One reason I got involved in the school is its child-centric learning approach,” he said. The auction proceeds help make that “fiscally responsible.”

Tickets for the Antioch School’s Auction Gala & Comedy Show are $55 and can be purchased by using the Paypal link on the school’s website — antiochschool.org -— or by calling the school at 767-7642.