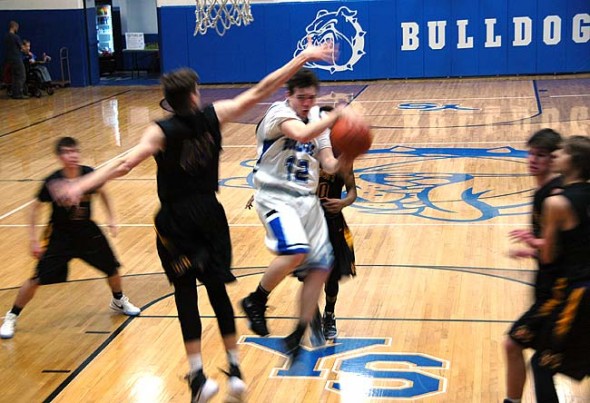 Senior Ethan Dewine (#12) blurs the boundaries of time and space as he breaks through Dayton Christian’s defensive wall during the Bulldog’s home game on Jan. 29. The Bulldogs won 60-49, clinching the Metro Buckeye Conference championship and bringing the Bulldog’s conference record to 10-0. (Photo by Dylan Taylor-Lehman)

Basketball
Boys
The Yellow Springs Bulldogs have clinched the Metro Buckeye Conference title after soundly defeating Dayton Christian at home on Jan. 29. The final score was 60-49, pushing the Bulldogs’ conference record to an astounding 10–0, with a 14–5 record overall. The title supplants longtime rivals Troy Christian, assuredly usurping their five-year reign as conference champs.

The Mills Lawn 5th and 6th grade choir kicked off the evening with their rendition of the national anthem. The bravado of the anthem heralded the bravado of the game, as the Bulldogs almost doubled Troy Christian’s score in the first quarter and permitted them only two points in the second. Senior Isaiah Taylor was on fire, grabbing 14 rebounds and sinking 10 of 15 shots, totaling 21 points. Devon Perry followed with seven rebounds, three steals and 15 points. James Browning pulled down six rebounds and scored nine points.

The championship is a nice way to cap off the careers of the team’s five seniors, who are all team starters. The team’s record was 6–16 when head coach Steve Grasso started coaching three years ago. The team’s improvement reflects the seniors’ tenacity and the cohesiveness of the team as a unit, Grasso said.
Moreover, the Bulldogs’ victory is impressive considering it is one of the smallest schools in the smallest district in the state. Dayton Christian is a private school that can draw from a larger swath of students and athletes, while YSHS is powered purely by local talent. Some tougher games were scheduled this year, said Grasso, because he knew the team was going to be good.

The team’s doubly important next game, Friday, Feb. 5, will be senior night, a night featuring many festivities in honor of the senior players, including the classic cutting down of the nets. The game will also be against rival Troy Christian, which is in second place in the conference with a record of 6-3.
Yellow Springs Bulldogs also beat Emmanuel Christian 46–33 on Jan. 26.

Swimming
What a way to close out the last weekend of January, said YSHS swim coach David Hardwick. The weekend heralded the end of the regular Bulldog Swim Team season, with the team competing in a a fun and festive meet held at the Wittenberg University Aquatic Center on Jan. 31.

The meet started with a tribute to the competing teams’ seniors, including YSHS team captains Aman Ngqakayi and Charlotte Walkey. Ngqakayi’s advice to his fellow swimmers was “have fun swimming and work hard in practice,” with Walkey emphasizing “working hard and attending every practice.”

Nineteen YSHS swimmers participated in 20 events. The team scored 128 total points, allowing for a third place finish against the six other regional teams competing in the meet. Everyone on the team contributed to the scoring in a truly great team effort, said Hardwick, noting also that “it is hard to believe that so many team individual times are still falling.” Fifteen personal records were set during the event, even while some of the swimmers had been dealing with minor sickness and injuries, said Hardwick.

Harper Mesure had an outstanding day as he scored four points in the 100 backstroke. The real story was that he lost his goggles, said Hardwick, a swimmer’s nightmare, but with great determination and perseverance he finished strong with a personal record. Sarah Zendlovitz scored a seventh-place finish in the 100 butterfly. Olivia Brintlinger-Conn showed great improvement as she cut 3.48 seconds off her 100 breaststroke time and took seventh place. Elle Peifer cut a remarkable 6.92 seconds off her 100 backstroke time. Rounding out the individual scoring was William Gregor, with a eighth-place finish in the 100 Breaststroke. The team scored 56 points with their relay prowess.

With only two weeks left until sectionals, “we are now in taper and tune mode,” said Hardwick. The next event is the ever important conference meet — the Metro Buckeye Championship — to be held on Feb. 6 at the Trotwood pool, he said.