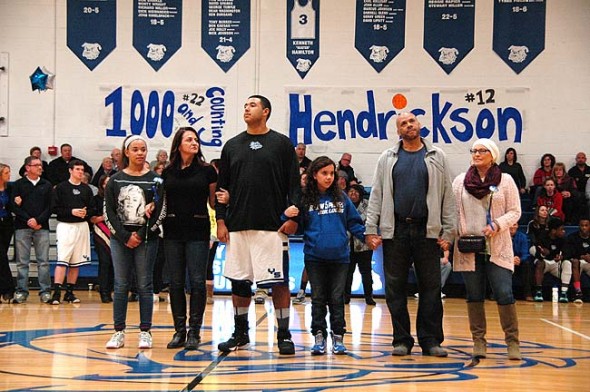 Senior Bulldog Isaiah Taylor stands with family members — from left: Alayna Wilson, Tanya Pahl, Isaiah Taylor, Sophie Clouse-Taylor, Michael Taylor, Lori Clouse — in the Yellow Springs High School gym as part of Senior Night, a cememony celebrating graduating athletes in every sport. Taylor is a starter on the basketball team and played — and won — one of the final games of his career immediately following the ceremony. (Photo by Dylan Taylor-Lehman)

Not to be outdone by the Bulldogs’ recent basketball championship, the YSHS swim team recently captured their own conference title, wrenching the title free and claiming it for their own Feb. 6 at the Metro Buckeye Championship. The team’s stats for the meet were “unreal,” Coach David Hardwick said: YSHS’ performance included the wanton destruction of at least 20 personal records and an accumulated 248 points overall, firmly entrenching themselves as the region’s foremost amphibious athletes.

“I’m so proud of all the swimmers in accomplishing the goal of winning the conference!” said Coach Jody Chick. “It took the entire team to make this happen.”

The Lady Bulldogs led the scoring with 179 points, leading to the school’s first ever win of the women’s trophy. Olivia Chick led the charge with a new record in the 100-yard backstroke, a blazing time of 1:01 minutes. She also had a first place in the 200-yard freestyle in 2:02. The women’s 400 freestyle relay was equally outstanding, as YSHS upended the meet record set in 2006 by 2.48 seconds, leaving their mark with the new time of 4:21.38. Eden Spriggs, Olivia Brintlinger-Conn, Charlotte Walkey and Olivia Chick all received medals for this performance. The winner for most improved was Aza Hurwitz, Hardwick said, who cut 16.87 seconds off her 500 freestyle time.

Assistant Coach Brad Martin noted that the team’s confidence had been building all season long, especially with the underclassmen. Proving this, freshman Eden Spriggs showed incredible athletic depth as she scored two first-place finishes in the meet. She cut 10.97 seconds off her time in the 200 individual medley, not only scoring first place but setting a new personal best. Spriggs finished first in the 100 butterfly with a time of 1:08.16. Contributing to the balance and ensuring this impressive win were Lauryn Dewine, Jude Meekin, Maddison Kellar, Elle Peifer, Sara Zendlovitz, Jorie Sieck, Ellery Bledsoe, Hannah Morrison and Amelia Gray, many of whom set one, if not two, personal bests.

But without a strong showing from the boy Bulldogs, Hardwick said, the overall win would have slipped from the team’s grasp. The boys scored 69 points and finished in third place, only four points behind second-place finisher Xenia Christian. The boy’s leader in the meet was Aman Ngqakayi, said Hardwick, as he set two new meet records. Ngqakayi broke the 100 freestyle record he set in 2015; the new time to beat is 49:40. He also won and smashed his old 2015 record in the 100 breaststroke, cutting over three seconds to finish with the new record-breaking time of 1:01.81.

The team had a very strong showing at the Metro Buckeye Championship and swam a few victory laps at their Monday practice, Hardwick said. But the team is not resting on its laurels, as they are preparing for sectionals this coming weekend. The boys are scheduled to begin sectional competition on Friday, Feb. 12 at Centerville. The girls will be starting on Saturday, Feb. 13 at Mason High School.

According to Assistant Coach Martin, the team has improved so much the last few months that the coaches can’t wait to see what they’ll do at sectionals. Hardwick was a little lower key in his assessment.

“I believe we will have some surprises,” he said simply, and cryptically.

As reported last week, one of YSHS’s final basketball games would be against the Metro Buckeye Conference’s second-place team Troy Christian, who were conference champs for the last five years. Perhaps it was the Senior Night festivities that imbued the team with a special ferocity and pride to play under the Bulldog banner, but YSHS ended up thoroughly squashing Troy Christian 50–34.

The Bulldogs have two games left before their sectional game against Cedarville on Feb. 28. The team’s record is currently 15–5, with an 11–0 conference record.

The Lady Bulldogs finished their season with a quick two games over the past week, one of which took them to the heights of joy and another solidifying the reality that every action has an equal and opposite. The Bulldogs played Troy Christian at home on Feb. 4 and evaded glory by a mere six points, as they lost 45–39. Junior Elizabeth Smith racked up her customary double-digit points, scoring 18. Junior Julian Roberts was next in line, putting up nine points.

The Lady Bulldogs next travelled to the dark depths of Darke County, playing Franklin Monroe on Feb. 8 and beating them 42–36. Smith and Roberts again led scoring, with 23 and 17 points each, respectively. Senior Molly Hendrickson contributed her last two points and four rebounds. As a whole, the team went out on a high note, as the game was their last of the season. Their record for the year was 2–20, with a 0–10 conference record.