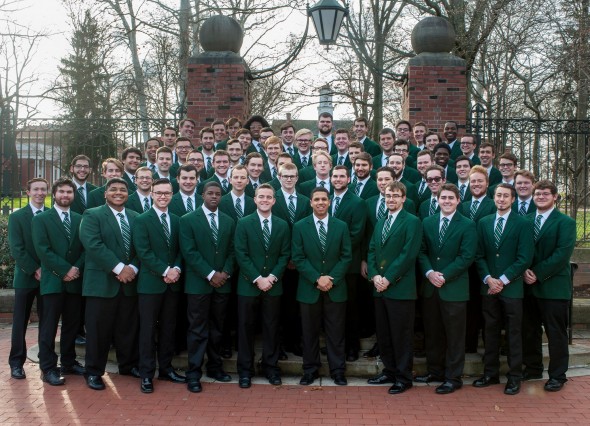 The Singing Men of Ohio will perform in Yellow Springs this Saturday. (Submitted photo)

Singing Men of Ohio to wrap up tour in YS

Ohio University’s Premier Men’s Choir, the Singing Men of Ohio, will perform at the First Presbyterian Church on Saturday, March 5, beginning at 7 p.m. This will be the final stop on their 2016 spring tour, entitled “Lose Not A Chance To Waken Love.” The tour, which takes the choir through Blacksburg, Va.; Atlanta, Ga.; New Orleans, La.; Nashville, Tenn.; Lexington, Ky.; and finally to Yellow Springs, was organized by Yellow Springs High School graduate and OU senior Rourke Papania. The show will include performances of standard, contemporary and original choral repertoire. A performance by the choir’s select a cappella group, Section Eight, will also be featured.  Admission is free, and donations will be gladly accepted.

The Singing Men of Ohio is an ensemble of both undergraduate and graduate students at Ohio University, and is comprised of 80 members. The choir is directed by Dr. Daniel J. Hall, who holds degrees in choral studies and directing from Frost School of Music at University of Miami (Florida) and Brigham Young University. According to the choir’s website, the Singing Men of Ohio are recognized for the variety of musical styles they employ, including “spirituals, motets, French chansons, German and American part songs and folk songs, musical theater, barbershop melodies and their own peculiar brand of hijinks.”

Click below to watch Section Eight, the choir’s a cappella group, perform a unique rendition of Adele’s 2015 hit “Hello.” The performance was given at the 2016 Midwest Quarterfinals of the International Championship of Collegiate A Cappella in St. Louis, Mo. last month, where Section Eight won third place.