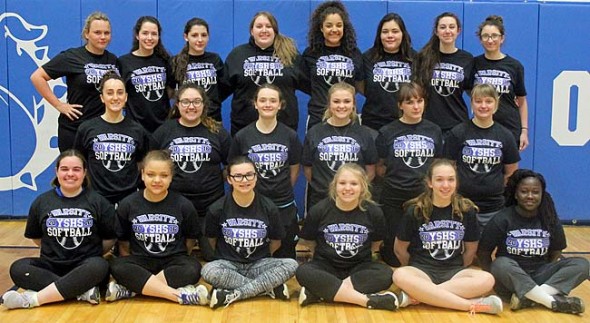 Due to reworked season schedules and games postponed by inclement weather, game-by-game analysis will continue next week. However, fresh off of their opening game win against Catholic Central last week, Bulldogs softball coach Jimmy DeLong offered this softball preview for the coming season.

Last season, the Lady Bulldogs high school girls varsity softball team finished the year on a high note with three wins in their last four games, including a 21–0 win on Senior Night. This year’s team hopes to continue that success for the upcoming year. Coach DeLong said he is upbeat about the team’s prospects.

“This is my fifth year coaching at the high school,” he said. “The team enjoys improving their skill level with off-season hitting and pitching lessons. It’s starting to pay off with the on-the-field results.”

This year’s team has 20 players on the roster, drawing heavily from the sophomore and junior classes. Nekayla Hawkins is the team’s only senior, playing her third season under coach DeLong. She is a versatile athlete who is “my best 3rd baseman and my best outfielder on the squad,” he said, so she’ll be playing both positions. The rest of the infield is anchored by sophomores Gracie Price (first base), Elly Kumbusky (second base) and Kadie Lafferty (shortstop), and includes junior Amelia Gray (second/third).

“Kumbusky started last year as a freshman and has a great work ethic,” DeLong said. “She worked hard on her hitting in the off season, and on defense she brings a lot of quickness and speed to the team.” Lafferty also started as a freshman and has had tremendous success, stealing 25 bases and a .571 on base percentage. She bats leadoff, plays shortstop and is also backup pitcher and catcher, DeLong said.

Gray and Gracie Price also play key roles on the team. Gray has solid mechanics on defense and a good eye at the plate and can play second or third, he said, and Price is the surprise of the season so far. It is her first year playing softball and she’s slotted in the lineup as the starting first baseman on defense and the clean up hitter on offense.

The pitcher/catcher battery is well manned, with juniors Hannah Morrison (pitcher) and Danny Horton (catcher) set to see the bulk of the action. Morrison transferred from Greenon a year ago and proved to be an ace on the mound. Last year, Morrison was named to the All MBC Conference team. She averaged over one strikeout per inning and as a hitter she had a stellar .455 batting average.

“Morrison is clearly the ace of my staff,” DeLong said. “She throws hard and accurate and her work ethic is unparalleled. She goes to weekly pitching lessons in the off season and it’s paid off as she has picked up more velocity and accuracy for this season.”

Horton begins her third season as the team’s starting catcher. Coach DeLong commented that Horton has unbelievably quick hands and the mental toughness required to be a good catcher.

“She is one of the few girls on the team who has quick enough reflexes to be able to catch Morrison,” he said.

“There are a lot of quality players competing for outfield time. Victoria Willis, James and Bothwell all played well last year,” DeLong said. DeWine, Buckenmyer, and Brielle Willis are extremely athletic first-year players who are slowly but surely learning how to play softball, he added.

“Buckenmyer and Brielle are blessed with blazing speed,” he noted. “I like to utilize girls who can create runs with their running ability.” Other players on the team are Elisha Harney, Erin Mooneyham, Alena Musah and Jorie Sieck.