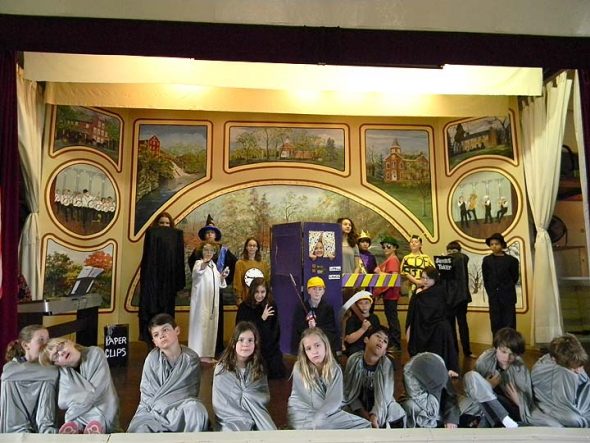 The Antioch School will perform “The Phantom Tollbooth” this weekend at the Clifton Opera House. The cast is pictured in just some of the costumes they’ll wear: up front are the sluggish Lethargarians; behind them are demons, number miners, King Azaz and his advisors, the Mathemagician, the Spelling Bee, Dr. Cacophonous A. Dischord, the Senses Taker, Milo, Tock and the Tollbooth itself. (Photo by Lauren Shows)

Click here to view more photos and a brief video of a rehearsal.

Imagine coming home from school one day to find that a mysterious tollbooth has appeared in your home. That’s precisely what the Antioch School Older Group, or OG, and Thirds students will be doing when they perform “The Phantom Tollbooth” this weekend at the Clifton Opera House.

The musical, which was adapted from the novel of the same name by its author, Norton Juster, with music and lyrics by Arnold Black and Sheldon Harnick, follows the adventures of Milo, a perpetually bored boy who goes through the eponymous tollbooth into a world full of wacky folk, where puns overflow and figures of speech come to life. Along the way, of course, there are mishaps and mayhem and mathematics, princesses and kings and demons, and the lesson that there is always something new to learn, and there’s never time to be bored.

In the week leading up to the production, the students have been rehearsing on stage at the Clifton Opera House each day. On Monday morning, their props (which include giant textbooks and pencils and an oversized box of paperclips) sat ready on a table near the stage, and while some of the young actors were already on stage rehearsing their scenes, others moved around the auditorium, practicing lines and getting into costume.

Lucy Dennis, dressed in a doctor’s white lab coat (which belongs to her grandfather) and stethoscope and holding out a large spoon introduced herself as “Cacophonous A. Dischord, Doctor of Dissonance — I’m a noise doctor.” She said she has a very specific way to get into character: “I kind of just … make a lot of noise!”

Sylvia Korson, who will play the Princess of Sweet Rhyme and the Spelling Bee, was dressed as the latter. In this role, she said, she has a rivalry with another character, the Humbug, who is played by her best friend. “It’s hard,” she said, “because we have to hate each other.” She smiled mischievously to herself. “But it’s also fun!”

Antonio Chaiten, who was dressed in a chic black suit and bowler hat, had misgivings about his costume: “My mom went too far,” he said. He has two roles in the play, portraying Ordinary Man and a king’s advisor.

According to Gabriella Skidmore, many of the students are playing multiple roles; she herself will portray the Whetherman, the  Princess of Pure Reason and a demon. These last two roles, she said, are slightly at odds: “Me and my sister, the Princess of Sweet Rhyme, we two get stuck in the Castle in the Air, we get banished there by our brothers, King Azaz and the Mathemagician.” In her role as a demon, she said, her ultimate goal is to stop the play’s heroes from releasing the princesses from their imprisonment and to “wreak havoc.” She said she has no trouble embodying two such disparate characters; the real challenge is physical, as she has only minutes to change costumes between scenes for her roles.

Director Sally Dennis says that, because Antioch School students pick their own roles and don’t audition, it’s often the young actors who want smaller roles who end up wearing so many hats. These students, she said via email this week, “spend a lot of time on stage and are quite busy back stage with multiple costume changes, moving set pieces and props on and off the stage, creating sound effects, running the lights and singing in group numbers. … The plays really are about everyone working together for something bigger than themselves.”

Older Group teacher Chris Powell agreed, saying that working on the annual play, which the students have been rehearsing for a month, is always “a big confidence builder. … Eventually everybody’s going to get to have a lead role if they want one, and so they have the opportunity for taking leadership, they have the opportunity for having public presence. They have to memorize their lines, so they really have a lot of brain activity involved in this as well. I think those are probably the most important things they get out of it — plus, it’s fun.”

In the lead roles this year are Lida Boutis, who plays Milo, the play’s unlikely young hero, and Marin Wirrig, who will be Tock, the large, anthropomorphic dog with a clock on his sides — a “watchdog.” Boutis and Wirrig, along with Selah Griffin (who plays the Dodecahedron and a demon) and Ella Shope (Narrator, demon, king’s advisor and adjective seller), will be leaving the Antioch School for middle school next year, and so this year’s production is a kind of last hurrah for them, though they all expect to continue acting after they leave.

Said Griffin: “A lot of the kids [at the Antioch School] go on to do fun theater things.”

Shope has visions of stardom even beyond her school years: “I want to be a voice actress,” she said.

This is also the final production for Powell, who will retire as OG teacher this year, passing the teaching baton to Dennis, who is currently the OG aide. Said Powell: “It’s a poignant moment. I’ve been doing these productions for 28 years, and this is my last one. … It’s bittersweet to have my last production.”

But it’s not exactly curtains for her, she said. “I do plan to come back and work with the group when they’re doing their next musical. I think this is one of the favorite things that Sally and I both do during the school year.”

The Antioch School will present “The Phantom Tollbooth” on Friday and Saturday, April 29 and 30, beginning at 7 p.m., at the Clifton Opera House. Admission is free, and donations will be welcome at the door to help cover production costs.