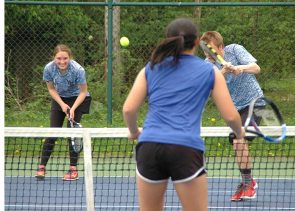 The Yellow Springs Bulldogs tennis doubles team of Kasey Linkhart and Dylan Dietrich served their way to victory against the Xenia Christian Ambassadors, winning both of their matches 6–1. The Bulldogs emerged victorious with a final score of 3–2. (Photo by Dylan Taylor-Lehman)

The Bulldog tennis team took over the courts at the Wellness Center on Thursday to play the Xenia Christian Ambassadors. Parents and spectators sat in lawn chairs outside the fence. The pock of tennis balls being sent across the court was punctuated with accolades.

The Bulldogs beat the Ambassadors 3–2. Peter Day won both of his matches, 6–2 and 6–4, as did the gruesome twosome of Kasey Linkhart and Dylan Dietrich, who won their doubles matches 6–1 and 6–1.

The matches are scored on the honor system, with players winning with tact or gracefully conceding defeat. Parents kept stats in notebooks and even a scrap piece of cardboard, which would occasionally be referenced if a point was especially contentious.

Knemeyer is a name familiar to YS sports fans, as he plays soccer, volleyball and tennis, and will play basketball next year. He said he was introduced to soccer at a young age and had been picking up more sports since then. He won his matches against the Ambassadors, 6–0 and 6–3.

“We like playing for fun, but competition brings out the best of us,” he said. “There’s an intense focus that comes from competition.”

The team previously played a JV match against Northwestern, losing by a close score of 2–3. Peter Day and Forrest Rowe both won their singles matches 6–1, 6–1. Coach Donna Silvert said that while the combo of Duard Hedley and Calum Siler lost their match, it was the most interesting match of the day and overall a great show of tennis.

The Bulldogs most recently played Dayton Christian, and succumbed to their volleys 2–3.

Silvert added that Jason Knemeyer, an elementary school student, has been helping the team. He’s been a tremendous help and he’s a great analyst, she said, which are the makings of a fantastic coach.

“The players really listen to him,” she said.

Several members of the YSHS track team competed at the 57-team Wayne Invitational last week. The bulk of the competing schools were some of the top Division I schools in the state. A select crew of Bulldogs represented Yellow Springs. Oluka Okia tied for first in the high jump with a leap of 6´4˝. Kaner Butler earned a hard-fought fourth-place finish in the 300 hurdles and Julie Roberts made the podium with her eighth-place finish, also in the 300 hurdles. Olivia Brintlinger-Conn and Charlotte Walkey also competed at the invitational.

The remainder of the team competed at the Mechaniscburg Relays, where our hometown athletes earned a number of respectable finishes. Jasmine Davidson and Amani Wagner took first place in the shot put. Payden Kegley and Jude Meekin earned second in the pole vault, and the team of Meekin, Lily Bryan, Dyemeisha Banks and Hannah Lawson earned second in the 1600-meter relay. Kegley, Alex Spitz, Wagner and Davidson took third in the Ironwoman 400-meter relay. On the boys’ side, Okia and Joe Plumer both took second in the high jump, with Hayden Orme and Plumer taking third in the long jump.

The YSHS track teams will host the annual Bulldog Invitational on Friday, May 6.

In the first Cedarville game, Junior Pitcher Hannah Morrison went the distance and struck out 11 batters in the first four innings, contributing to a final tally of 13 strikeouts in six innings of work.

“Morrison was throwing hard and was able to mix in her curveball and screwball to keep the hitters off balance,” said coach Jimmy DeLong. “As always.”

Throughout the week, Morrison pitched 17 innings and struck out 33 batters, averaging almost two strikeouts per inning.

“Morrison pitched well this week against good competition,” DeLong said. “Our hitting and defense struggled a little bit against some good teams so we weren’t able to get the wins but the effort was always there.”

The offense had some good moments during the week and was led by sophomores Elly Kumbusky and Kadie Lafferty and freshman Lauryn DeWine. Lafferty was on base six times with four stolen bases and three runs scored, and Kumbusky was on base six times with two RBIs and two runs scored. DeWine also had a good week at the plate, as she was on base five times with an RBI and run scored. DeWine is a naturally disciplined hitter at the plate, said DeLong, and has made a quantum leap in her level of play, on both offense and defense, as the season has progressed.

“Whether it be a walk or base hit, DeWine finds a way to get on base,” he said. “Her on-base percentage for the week against some good pitching was an outstanding .620.”

The week ended on Sunday with the Dayton Division IV Sectional Tournament drawing, held at Dixie High School. In the drawing, the Yellow Springs Bulldogs received a #4 seed and will host #5 seed Twin Valley South. Coach DeLong was excited about how the drawing went.

“I was pleased with the results of the seeding,” he said. “I knew we’d get a good seed. Our record (5–8) is misleading because four of our losses have come against bigger Central Buckeye League teams and another against a solid Division II team. They’ve all been quality losses.”

The team is starting to learn and understand their roles on the field, he said. With Morrison on the mound, the Lady Bulldogs can compete with any team in the Division IV sectional, he believes. He added that he and the team are looking forward to hosting and playing the first tournament game against Twin Valley South. The game will be played Tuesday, May 10, at Gaunt Park at 5 p.m.