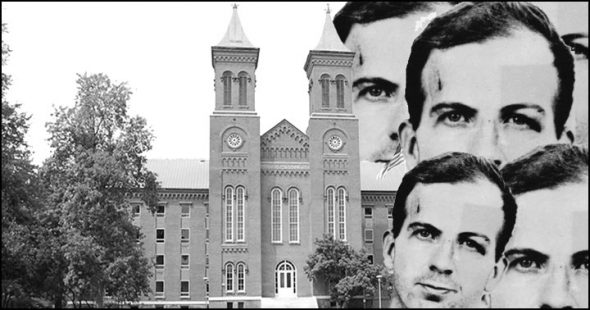 From Rod Serling to Hollywood stars, Yellow Springs has its fair share of celebrity associations. But one of its strangest connections is likely its most infamous. According to some theorists, at one point Yellow Springs was said to host none other than Lee Harvey Oswald, the man behind the Kennedy assassination. Was he really here? Why? How? Was it all just part of a larger CIA-led plot?

Ruth Paine graduated from Antioch in 1955 and eventually moved to Irving, Texas with her husband and their children. There she befriend Marina Oswald, Lee Harvey’s wife, who had come to the United States with Oswald following his years in Russia. Paine spoke Russian and met Marina through a friend. When Lee Harvey moved around Texas looking for work, Marina and their two children would stay with Paine. In October 1963, Lee Harvey got a job at the Texas Book Depository. On November 21, 1963, he came to retrieve some of his belongings from Paine’s garage, including the rifle he would use to kill Kennedy the next day.

Paine was promptly questioned by the FBI and later testified at the Warren Commission, the official government inquiry into the assassination. Her testimony discusses her time at Antioch where she admits having read The Communist Manifesto as part of a class. She said she had no interest in it later, nor did she have any interest in Das Kapital. (“I have seen the size of the book, and I certainly would not want to read it,” she said in her testimony.)

Paine also discovered by accident that Lee Harvey had attempted to assassinate another government official, who was not wounded. But she was not considered to have any sort of involvement with Oswald and was able to go about her life, eventually becoming a school psychologist. The home where the rifle was concealed was eventually purchased by the city of Irving, Texas and turned into a museum.

The rumors connecting Oswald to Yellow Springs started a few weeks after the assassination. Every city probably seized on the most tenuous Oswald connection.

The Columbus Dispatch wrote an article about the Paine-Antioch connection, noting Paine learned Russian from Marina Oswald, that she considers the Russian language a hobby, and that she is a Quaker and a pacifist. The article published the addresses of Paine’s parents and family, who lived in Columbus, in their entirety. In the same piece, the Dispatch reported that Antioch students were among those involved in a “Fair Play for Cuba” demonstration in front of the statehouse in Columbus.

In November 1963, a Columbus, Ohio police officer received information from an anonymous source that Lee Harvey Oswald had attempted to attend Antioch in 1957 but was not accepted because he couldn’t prove he graduated high school. This has never been verified.

An intelligence agent issued a report in early 1964 suggesting Oswald was receiving money orders through a bank in Yellow Springs. But this allegation was “completely run out and has proven to have no basis in fact,” and the report was not disseminated outside of the office. In fact, a declassified document mentions that the people responsible for this particular rumor were chastised: “Personnel of the Cincinnati Office who were responsible for the poor wording in the report [about] the Oswald case have been issued sharp error slips…and have been issued emphatic admonitions.”

However, it is likely that “official” accounts of his whereabouts will be distorted by the government, as many believe that Oswald was a CIA operative who only appeared to be a pro-Castro agitator. The story goes that when the government orchestrated Kennedy’s assassination, they had the perfect person to blame it on, Oswald, because he was already known as a vocal communist.

In addition to past Antioch professors having connections to security agencies, author Bob Fitrakis writes that a few former members of Antioch’s board of trustees have connections to corporations that provide defense technology solutions to the Department of Homeland Security, the Department of Defense, and other intelligence agencies. Fitrakis also says that one shouldn’t fail to notice the college’s proximity to Wright-Patt or The Ohio State University, who works very closely with the “CIA’s favorite nonprofit Battelle,” a mysterious research company whose campus is located right next to the university.

However, Antioch may not be a CIA front in toto, it may just have been infiltrated. “If the CIA or U.S. intelligence services were involved in the subversion of America’s most pro-peace college, it wouldn’t be the first time that the progressive college campuses have been infiltrated,” writes Fitrakis. “The CIA subverted the National Student Association in the late 50s and early 60s. The agency also has been accused of subverting everything from fraternities to Fullbright scholars to Peace Corps workers.”

Was Antioch subverted? Was Oswald actually in Yellow Springs? Did Ruth Paine know more than she let on? Maybe we’ll know the answers to these and the infinite other questions about the Kennedy assassination when the rest of associated records are released to the public next year.