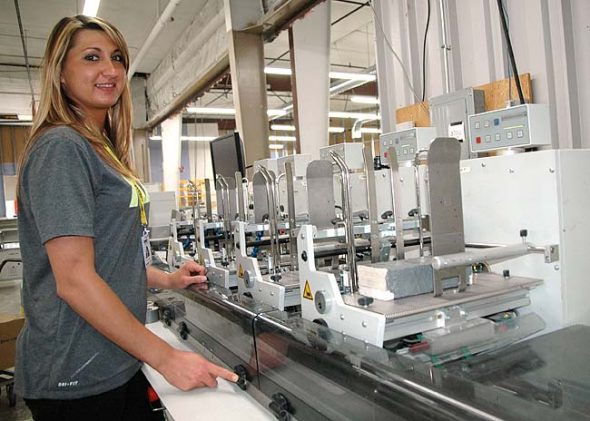 DMS ink, which purchased the former Antioch Publishing facility in early winter, was recently honored for its fast growth rate. Pictured above is the company’s assistant manager of production, Tiffany Simpson, with the “intelligent inserter,” which folds, inserts, counts and prints materials all in one process. The company can print 60 million pieces of direct mail a month. (Photo by Diane Chiddister)

DMS ink honored for its growth

In the last year DMS ink, formerly Dayton Mailing Services, has enjoyed a growth path in a variety of ways. In January the Dayton-based printing business expanded its production facilities by purchasing the former home of Antioch Publishing and moving the bulk of its operations to Yellow Springs. The company also bought new equipment, broadened its reach, made plans to build a new addition to the building and hired 14 new employees.

And recently DMS ink was recognized as one of the fastest growing Asian-American businesses, with its inclusion into the “Fast 100,” an annual award presented by the U.S. Pan Asian American Chamber of Commerce Education Foundation, or USPAACC.

“It’s been a whirlwind year for us,” DMS ink President Christine Soward said in an interview last week.

Soward was speaking from Atlanta, where she was attending the award ceremony for the Fast 100. This is DMS ink’s second year to be honored, and last year it was the only Filipino-owned company — Soward’s mother is Filipino — to be honored. This year, three other Filipino companies were among the winners.

The vetting process for the competition is intense, with candidates having to submit their financials and meet benchmarks, Soward said. Last year’s financials for DMS ink reported about a 40 percent growth rate, and this year company leaders expect to double its production, she said.

Part of the direct-mail industry, DMS ink produces large scale printing and mailing projects for its clients, some of whom are from the health care and insurance industries, and some from municipal or state governments. The company can produce 60 million pieces of mailing per month, she said, and some of the company’s rapid growth can be attributed to its investment in new machinery and processes.

And Soward herself is responsible for much of the company’s forward vision, according to DMS public relations officer Gery Deer this week.

“She is always challenging all of us to the next big thing,” he said, also giving credit to the company’s “amazing” management staff.

For instance, in recent years the company has expanded its reach to include not only large scale printing and mailing projects, but also data management, allowing its clients to zero in on desired demographics for mailing.

“We have a talented group of programmers,” Deer said. “We’re not just a mailing business.”

New directions for DMS ink have also in recent years included the addition of marketing and other creative services. The company acquired two subsidiaries to facilitate its expanded reach: Barrett Brothers, a legal publishing firm that prints documents for local and state governments, and the Bricks Agency, headed by Deer, which provides marketing and creative services.

The company also plans to expand its facility, adding on a 50,000 square foot production area to the north side of the building. At that point, about 30 more production workers will be added.

To celebrate its recent move and changes, DMS ink will hold an official ribbon-cutting ceremony for its new facilities at 888 Dayton St. on July 12. Visitors then can see changes already made, including new landscaping and signage, Deer said. They can also see new parking and entrances for the existing tenants of the building, including Primary Care Physicians, the Kettering Health Network Community Physicians, Brick Forge and Laurelei Books, all of which have stayed on at the location following the DMS move.

Originally Dayton Mailing Services, the company was founded in 1984 by Soward’s father, Robert Hale, and she purchased it from him in 2005.

Currently, the Yellow Springs site of DMS ink employs about 60 people, with half of those working in the production plant and half in information technology, marketing or creative work. Since its move to the village in early winter, the company has hired 14 employees, including graphic designers, programmers and administrative staff. Four to six new jobs are currently being created, Deer said.

The company plans to add a 50,000 sq. ft. addition to the north side of the building, at which point it will employ 90 in Yellow Springs.

The move to Yellow Springs has gone well, according to Soward. While some employees were initially anxious because they weren’t familiar with the village, they have appreciated the small-town atmosphere and found it calming, she believes. The open and spacious office area created by Antioch Publishing, and most recently occupied by Antioch University, works well in a company where brainstorming and creative thinking thrive on interactions between employees, Deer said. And the company especially appreciates having its production facilities on a single floor, so that employees no longer have to move heavy products up and down stairs, as in the old historic Dayton building.

“Yellow Springs has been gracious in welcoming us,” Soward said. “We look forward to many more years here.”