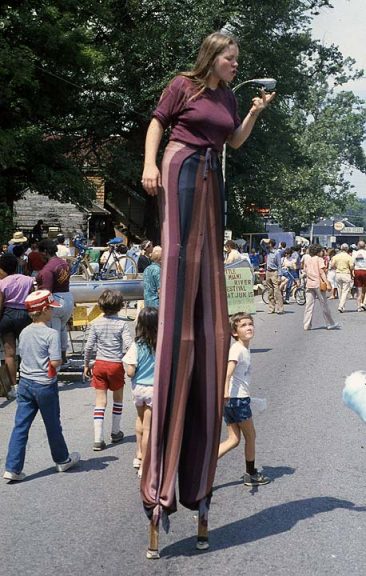 An unidentified daredevil takes a long walk during a street fair in 1988. The perspective would be welcome these days, as the event has grown significantly. (Photo by Irwin Inman, via Antiochiana)

Once more unto the streets…

Love it or dread it, Street Fair is a Yellow Springs tradition. But newcomers to the village anticipating this Saturday’s arts, crafts, music, food and beer extravaganza might not realize just how humble and homegrown the tradition is.

According to Jo Dunphy, who has sold real estate in Yellow Springs since 1960, Street Fair began in 1970, when shopkeepers on Xenia Avenue began organizing a summer sidewalk sale. They put their wares out on tables and also set up in the street, she recalled in a recent interview. Dunphy’s daughter, Sheila Dunphy–Pallotta, remembers as a kid chalking lines on the street with her dad.

It wasn’t called Street Fair then, and the sale was confined to shops fronting Xenia Avenue, plus a few vendors from outside the village, Dunphy said. The open-air sale drew several hundred people then — a far cry from the crowds of 20,000 to 25,000 that the festival pulls in today. But those small beginnings launched a Street Fair tradition that’s been unbroken for nearly 50 years, according to Dunphy, who was unsure when the second festival date in the fall was added to the calendar.

Molly Lunde, co-owner of Asanda Imports, remembers a smaller, quainter event growing up in the village in the 1980s. One of the highlights for her as a kid was buying — and using — silly string, she said. “I’m probably responsible for that clause in the contract,” she joked. The Street Fair guidelines for prospective vendors ban the sale of silly string, together with guns, knives and other threatening objects.

But beyond the fun of the festival, Street Fair influenced Lunde in another, deeper way.

“For me, it sparked the whole idea of entrepreneurial venture.” In her 20s, she traveled regularly to Asia to do yoga, bringing back “a small bag of beautiful things” to sell at Street Fair. The proceeds would fund her next trip to Asia. After several years selling at Street Fair and Dayton’s Second Street Market, she and her now-husband, Lee Kibblewhite, rented space downtown; in 2012, they bought, with another local couple, the building where Asanda is now located.

“I definitely have nostalgia for street fairs of my youth, but I feel so supported as a business owner today [by Street Fair],” Lunde said, noting that the festival provides a “great infusion of funds” and attracts  new customers to the business. And her children are now starting their own entrepreneurial ventures, she said, selling “fairy headbands” at Street Fair.

Asanda is one of at least three downtown businesses that began as Street Fair booths, according to Karen Wintrow, executive director of the Yellow Springs Chamber of Commerce, which organizes the semi-annual event. The other two are Twisted Tines and Urban Handmade, which recently moved from its Xenia Avenue shop into larger quarters at “would you, could you” In a Frame’s former storefront on Corry Street.

Wintrow believes Street Fair plays a major role in supporting local businesses, as well as spreading awareness of local nonprofits that set up booths and also staff the beer garden and benefit from tips and a stipend. Other local nonprofits make thousands of dollars annually from handling parking for the event and collecting fees, she said.

“I don’t know of very many downtown businesses [for which] Street Fair is not the best day of the year,” Wintrow said. “Infusing that kind of money into the community is a positive,” especially since much of the money comes from people outside Yellow Springs. Seventy percent of the Chamber of Commerce’s annual budget comes from Street Fair revenue, she added.

Of course, as much as Street Fair is a Yellow Springs tradition, complaining about Street Fair — the crowds, the noise, the traffic, the inconvenience — is also endemic to the village.

She emphasized that planners do “everything we can to ease the burden on residents,” including improving signage, increasing the number of restrooms and adding a shuttle service. The Chamber’s new “Yellow Springs app” debuted in time for Saturday’s Street Fair, another boon for fairgoers — and for villagers who may be spared visitors’ questions about how to get around.

Wintrow said the Chamber wouldn’t continue Street Fair if it didn’t have a net positive impact.

“We wouldn’t do this if we didn’t feel like it was enhancing the community,” she said.

The upcoming festival features over 200 arts, crafts and food vendors, two music stages with more than a dozen acts, a beer garden and street performers (who do not pay for performance space) around town. Responsible for pulling all of that together is former Antioch College student Alexandra Scott, the Chamber’s events coordinator. The festival takes months of planning, Scott said, including everything from lining up vendors and musical acts to recruiting the 50 or more volunteers that typically help staff the event to securing liquor licenses and renting Port-o-Johns.

By Street Fair policy, only vendors that sell handcrafted items may participate (Yellow Springs businesses and returning vendors are exempt). Scott vets vendors for quality and compliance with Street Fair guidelines. This June, there will be more than 159 arts and craft vendors, including 46 from Yellow Springs and Clifton. Vendors are coming from as far away as California and Florida, though most hail from Ohio. In line with past Street Fairs, roughly half are new and half are -returning.

On Street Fair morning, Scott will be up at 4:30 a.m. chalking booth numbers on Xenia Avenue and handling other last-minute details. She’ll spend hours riding her golf cart “attending to whatever people need from me” until the crowds get too thick for the cart and she has to continue her work on foot.

“By the end of the day my legs and feet are killing me, but I’m having so much fun,” she said.

And that, said Wintrow, is the point of the day. “If nothing else, go to the music fest. Sit and enjoy the music, have a couple of beers. It’s a great Yellow Springs day.”