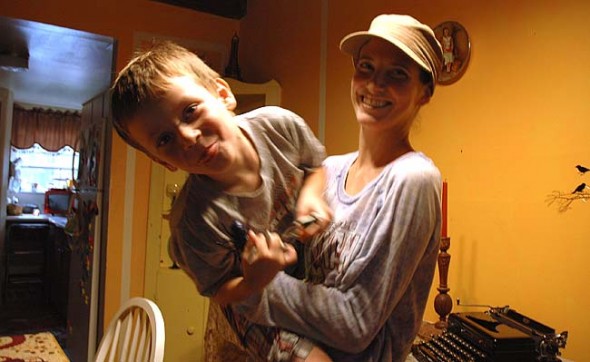 Lindsay Folke, here with her four-year-old son Cooper, was diagnosed with an aggressive form of cervical cancer in June. Peach’s Grill, where Folke works, will host a benefit to raise money for Folke’s medical expenses on Saturday, Sept. 6, with live music from 2 p.m. to 2 a.m. (photo by Megan Bachman)

Music and community for healing

Caring for a boisterous four-year-old while healthy is tough enough.

This summer, 38-year-old single mother Lindsay Folke was so sick she couldn’t even walk down to the Corner Cone to get ice cream with her son, Cooper.

Diagnosed with an aggressive strain of cervical cancer in June, Folke has undergone radiation and chemotherapy treatments that have sidelined her.

But Folke is optimistic that by next month she can go trick-or-treating with Cooper on Halloween, his favorite day of the year. He plans to be a pirate zombie. She plans to be healthy.

Unable to work and with medical bills piling up, Folke will be the recipient of a benefit fundraiser at Peach’s Grill on Saturday, Sept. 6.

Folke, a manager at Peach’s, has been on a leave of absence for the last several months and even with her employer’s health insurance, faces large out-of-pocket medical expenses.

Folke said this week she is grateful that Peach’s owners Don Beard and Christine Monroe-Beard have not only held her job for her until she is healthy, but have organized the benefit on her behalf.

“They have really gone beyond,” Folke said.

The benefit is just the latest example of how the community has come out to help Folke and her son during her illness, she added. For example, with no appetite because of persistent nausea and because “everything taste like metal,” Folke has been losing weight fast, she said. So her friend Melissa Schuster, who works at Sunrise Café, drops by a protein shake every morning. Every Wednesday Bentino’s Pizza delivers a free pizza. Friends bring by dinner every other weeknight in a meal share organized by Monroe-Beard.

“It’s the small things that really mean a lot, because it does help,” Folke said. “I am tired — plus I have a four year old,” she added.

Folke, who grew up on a farm just north of the village on Airport Road, moved back to the area from Portland, Ore. four years ago to raise her son. She expected that the village would be a good place to be a single mom, and has appreciated the flexible childcare, but wasn’t expecting so much support when she got sick, she said.

“Everybody has really chipped in,” Folke said. “It makes me so thankful that I’m here. I was really considering moving and I don’t think I could do that now, because of how amazing and how thoughtful everyone has been.”

After worrying symptoms including fatigue and bleeding earlier in the year, Folke found out she had cervical cancer at the beginning of the summer. Though the cancer was aggressive, it had not spread and doctors were optimistic that it could be treated. Still, the experience was terrifying.

“It was a big shock — it was really hard,” Folke reflected. “I was just thinking about my kid and what happens if something happens to me. It threw me for a second.”

According to the National Cancer Institute, so far this year about 12,000 Americans have been diagnosed with cervical cancer and 4,000 have died from the disease. Cervical cancer can be prevented by regular pap screenings and is one of the most successfully treatable cancers, according to the American Cancer Society.

Cervical cancer is almost always caused by the human papilloma virus, or HPV, the most common sexually-transmitted infection, according to the Centers for Disease Control. Some estimates are that 75 percent of the reproductive-age population may have some type of HPV. A new vaccine for teens and those in their early 20s can prevent two types of HPV, which cause 70 percent of all cervical cancers, the American Cancer Society adds.

But for Folke, who did not have any family history of cervical cancer or any other risk factors, the vaccine to prevent HPV was not available when she was young. She recommends, however, that others consider it.

“I would not want anyone to go through something like this which is easily preventable,” Folke said.

Monroe-Beard said she organized the benefit not only because Folke is a great manager and friend but because her Peach’s employees are “like a big extended family” and take care of one another.

“We’re a big family and we don’t want to lose anyone, so we do what we can to help each other out so we can stay together,” Monroe-Beard said.

Peach’s Grill has hosted many benefit fundraisers for community members in recent years and usually does one or two per year, according to Monroe-Beard. Recently, benefits have helped to raise money for cancer treatment for musician Carl Schumacher, cover medical expenses when J.J. Yates was brutally attacked in Cincinnati by unknown assailants, pay for optical care for DJ Clean Gene, buy a diabetic assistance dog for Ashton Gueth and raise money for medical expenses for Mia Campbell. Peach’s doesn’t organize every benefit, but is often the best location in town for an all-day fundraiser, Monroe-Beard added.

The benefits “fit with our spirit of camaraderie here,” Monroe-Beard said of Peach’s. And it’s part of what the Yellow Springs community is about, she said.

“We try to look out for each other,” Monroe-Beard said of her hometown. “Even if you didn’t grow up here, this is what people come to Yellow Springs for —that feeling.”

Not only is Folke inspired by how the community has rallied to support her, her illness has helped her appreciate the small things in life, from walking down to get ice cream with her son to taking hikes in the Glen.

“I need to do things different and not take things for granted,” Folke said. “I want to take advantage of how fun life is and not so much time worrying about things I can’t change anyway.”

Cooper also has chipped in during the hard time, Folke said, by not complaining too much about not being able to go out much this summer and cleaning his room, which Folke had never been able to get him to do.

“He’s also given me lots of hugs and kisses,” she said.