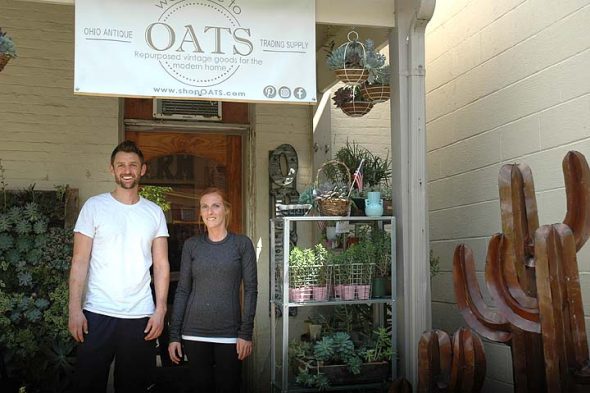 Sift through OATS for some eclectic home décor

The newest store on the downtown Xenia Avenue strip brings an eclectic mix of mostly home décor items that combine a sense of old and new.

OATS, Ohio Antique Trading Supply, is the operation of Abbey Knight, who opened the shop as a retail space for her Springfield-based warehouse of the same name.

A native of Springfield, Knight said she’s been surrounded by the antique trading business her whole life.

“My parents own the Heart of Ohio (Antique Center). My dad’s been in the business 50-plus years. We get stuff from all over the world. We do importing and exporting,” she said.

She’s been active in the business since she was 15. “I spent my summers going to auctions and estate sales.”

Knight opened the doors on her retail space the day of Street Fair, June 11. The shop is located at 241 Xenia Ave., the previous home of Urban Handmade, which recently moved to the building across from the post office formerly occupied by the “would you could you …” frame shop and gallery.

The outdoor signage for OATS identifies its wares as “repurposed vintage goods for the modern home.”

“We do a lot of vintage home décor, mixed with new,” Knight said. “That, and we’ve added plants. A friend of mine grows these locally in her green house. I have plants in my home and that’s kind of where the idea came about. We try to make it very organic — basically organic living — mixed with recycled stuff. It’s worked out really well.”

“We have lots of baskets and buckets,” Knight said.

The styles range from mid-20th century to industrial, including large metal alphabet letters. “The letters have been a big hit,” she said, noting that visitors have seen the home décor item on the cable television show “Fixer Upper with Chip and Joanna Gaines.” She sells the letters for $28 each.

Prices for other items range from $4 for jewelry to $600 for furniture pieces. “We try to stay pretty reasonable with prices,” she said. “We don’t want to be a collector.”

Knight finds merchandise through buying trips as well as “a couple of pickers all over the U.S.” Antique shows, estate sales and private warehouses are all sources. “We’re also a vendor of Country Living Fair,” she said.

With a farm just outside Springfield and a 4-and-a-half year old son, Knight said that she’s happy to have found a space in Yellow Springs. She said she thought about opening her store in Columbus or Cincinnati, but Yellow Springs suits her well, and she wouldn’t be surprised if she ended up moving here.

She said her son, Trevor, loves it, too. “He loves being here. He’s been the greeter, every time somebody walks in,” he welcomes them.

The shop has one employee — Yellow Springs native Sam Jacobs, who recently moved back to the village from New Orleans, where he was working as a prop master for television and film. “He’s a perfect fit,” Knight said.

Even though Knight grew up in the business, she didn’t plan to stay in it. She went to Wittenberg University in Springfield, first interested in sports medicine and then teaching. “I ended up taking business classes,” she said. “I kept getting drawn back to it (the family business), and I gave in,” she added with a laugh. She’s happy with the outcome.

*OATS is open from 11 a.m. to 6 p.m. Wednesdays through Saturdays and noon to 5 p.m. Sundays. The store’s Facebook page highlights new merchandise and lists special hours. For more information, call 342-3765.

As of Oct. 15, indoor visitation at Friends Care Community is suspended until further notice due to COVID-19 case increases in Greene County. Click here for details.