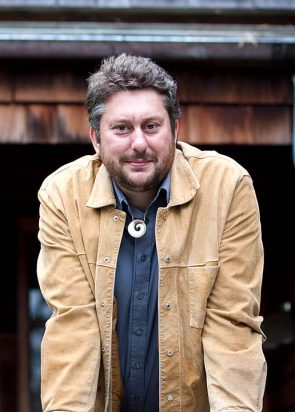 Architect Jason McLennan, a pioneer of sustainable design and creator of the Living Building Challenge, will speak this Saturday, Aug. 13, at 7 p.m. in the Antioch South Gym. (Submitted Photo by Paul Dunn)

A “deep green” architect is coming to Yellow Springs. Jason McLennan, recent winner of two major architectural awards and a pioneer of green building design, will give a public talk on Saturday, Aug. 13, from 7 to 8 p.m. at the Wellness Center South Gym at Antioch College. McLennan has designed dozens of innovative green projects around the world, and was recently announced as the designer for Antioch College Village’s cohousing pilot. Seattle-based McLennan and his team will be on campus during the weekend for a series of sessions with college leaders and prospective cohousing community members to kick off the cohousing project. His Saturday evening talk, however, is open to all villagers interested in green design and the ways in which buildings, people and the natural environment interrelate.

“Jason is a very talented designer, somebody in the vanguard of thinking about what it means to develop the built environment in a truly sustainable way,” said Sandy Wiggins, a green building expert and a consultant to Antioch College on the College Village project. Wiggins brought McLennan and the college together; the architect and his team are providing some pro bono services to get the cohousing pilot off the ground this fall.

McLennan is known worldwide as the creator of the Living Building Challenge, a framework that moves far beyond traditional sustainability measures and requires that buildings play a positive, regenerative role in local ecosystems. According to the website of the nonprofit International Living Future Institute, which manages the programs and conducts related advocacy work, buildings that meet all or even some of the Living Building criteria can claim to be the “greenest in the world.”

Talk on Green Design
“Deep green” architect Jason McLennan, a pioneer in sustainability and green design, will give a public talk on Saturday, Aug. 13, from 7 to 8 p.m. in the South Gym of Antioch College’s Wellness Center. The college has engaged McLennan to design the cohousing pilot project for Antioch College Village. McLennan’s talk will focus on connections between that project and worldwide trends in environmental design.

“The Living Building Challenge goes beyond the idea of minimizing harm … to create buildings and projects that are good for people and the planet,” McLennan explained in a recent interview. “It’s a very holistic framework for all the ways [buildings] impact on the world and in turn impact on people’s lives.”

That program led, in 2014, to the creation of the Living Community Challenge, which uses the principles of the Living Building Challenge to set sustainability standards for groups of buildings.

The Living Building Challenge and Living Community Challenge are “the standard bearers,” affirmed Wiggins. “They’re the “tip of the spear,” both in terms of what’s being called for and what’s possible in green design.”

Though the originator of the Living Building Challenge and founder of the International Living Future Institute, McLennan is no longer an employee of the Institute and is not involved in the assessment of projects.

The Living Community Challenge “scales up” the earlier Living Building Challenge. “Philosophically, they’re siblings,” McLennan said. “But they have different scales and different issues arise.” Rather than assessing a single building, Living Community standards measure the sustainability of a collection of buildings, such as a neighborhood, campus or city block.

There are currently no certified communities, though projects are underway in a variety of cities, McLennan said. The process takes time; the Living Community Challenge includes an upfront masterplan review, so the standards actually help guide the design framework for a project, as well as measure the outcome.

If certified under the Living Community Challenge standards, Antioch College Village could be the first such project in the world, both Wiggins and McLennan emphasized.

In his public talk, McLennan will not only describe the principles and philosophy of the Living Building Challenge and Living Community Challenge, but also provide case studies that he hopes will illuminate “what’s possible in green design,” he said.

One such case study is the Bullitt Center in Seattle, which was billed as the “world’s greenest office building” when it opened on Earth Day in 2013. According to a report aired by Northwest Public Radio on April 18, 2013, the Bullitt Center’s unique attributes include its use of 100 percent sustainably harvested lumber, the world’s only six-story composting toilet system and 575 rooftop solar panels that supply all of the building’s energy. The panels also collect rainwater, which is funneled to a 56,000-gallon cistern in the basement that provides all the building’s water.

The Bullitt Center meets the highest level of Living Building standards. First put forward in 2006, these standards are used to evaluate projects across seven performance categories: place, water, energy, health and happiness, materials, equity and beauty. Each of these has smaller, specific subcategories. Energy, for example, is measured in terms of “net positive energy,” which mandates that 100 percent of a building’s energy needs are self-generated using no combustion-based sources.

While certain metrics, such as for building materials and energy, may overlap with other green certifications such as LEED and Forest Stewardship Council, they are far more stringent than all other existing measures, according to the International Living Future Institute website. And many of the Living Building Challenge criteria bring an utterly novel focus on human well-being, according to McLennan.

“The training of architecture is really about how the built environment impacts the mental and emotional and physical well-being of people,” he said. Under the terms of the Living Building Challenge, these impacts are extended to the health of the ecosystem and the lives of plants and non-human animals within it, he added.

There are currently 10 Living Building-certified buildings around the world, according to Wiggins, and about a hundred the process of development. Unlike other certification programs, Living Building projects are assessed based on actual, not projected performance. This means that projects must be operational for at least 12 consecutive months before they are evaluated, adding another layer of rigor to the process, McLennan said.

Beyond his public talk, McLennan and his team will spend the weekend on the Antioch College campus gathering information for the first iteration of the cohousing design. One key decision is the location of the cohousing project, selected from several potential sites on campus, according to Wiggins. McLennan will also engage college leaders and prospective cohousing residents — specifically, members of the local cohousing group, the Antioch Eco-Village Pioneers — in a programming exercise to elicit basic design criteria for the project, including the design of individual units, the organization of units in relation to each other and the design and amenities of the common house that is a focal point of cohousing communities.

McLennan said he’ll be doing a lot of listening that weekend. “We take a very patient period of listening and learning. We view our project as having two clients: the people and the community writ large, which includes other species and future generations.” So he’ll be making a careful study of place, climate, culture and people, he said.

“I don’t like to come into a design project with a predetermined aesthetic. I don’t know what it will look like, and that’s the point. But it will be beautiful,” he promised, with a laugh.

With this weekend’s kick-off session, Wiggins said that the college is on track to complete the cohousing pilot’s conceptual design phase by the end of the year. He is currently raising funds for the pilot, previously estimated to cost $2.2 million for design and planning (an amount that includes some costs of the overall ACV project) and $6.5 million for construction. He is also working with the Village on zoning and planning.

CORRECTION: This article has been edited from the print to accurately reflect the number of buildings currently certified under the Living Building Challenge.