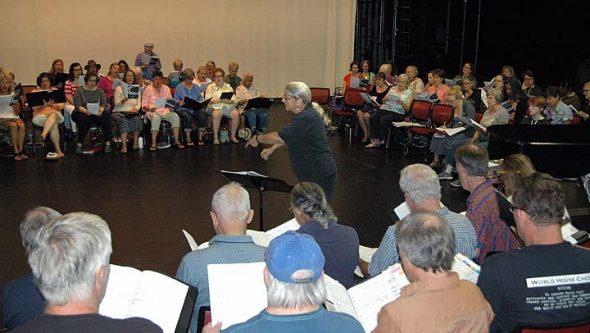 World House Choir director Cathy Roma directs members of the choir in a recent rehearsal. The choir was rehearsing for their upcoming program “Come Sit at the Welcome Table,” which features songs in a variety of languages and highlights themes of inclusion and unity. The group is composed of approximately 100 singers from all over Miami Valley. The program will be performed in Yellow Springs on Sept. 7 and 9, at the First Presbyterian Church. (Photo by Dylan Taylor-Lehman)

One song with one purpose

The upcoming concert series by the World House Choir, “Come Sit at the Welcome Table,” references the numerous ways the theme of inclusion is part of its performances: the variety of voices in the choir, singing in a multitude of languages, and the uplifting power that music has to bring people together.

“We wanted to create a program of choral music to widen the circle of inclusion,” said Cathy Roma, the World House Choir’s founder and director, recently. “We wanted to reach out to engage with all kinds of communities.”

The program’s title comes from a song written by a slave poet, said Roma, in which the author sings about eating and drinking but never feeling full and reveling in that abundance. The theme of welcoming everyone to a world of peace and plenty is a theme especially relevant in today’s global climate, she said, and was in fact developed last year partly in response to the worldwide refugee crisis.

The idea of inclusion and welcoming is woven into the very fabric of this country, Roma said.

“Think ‘E Pluribus Unum’ and ‘Give me your tired, your poor, Your huddled masses yearning to breathe free,’” she said. “Are these hollow statements or can we sing meaning into our creed?”

The shows are free of charge, but donations will be accepted. The performances will feature an interpreter for the hearing impaired. Attendees are encouraged to bring items to a community dessert potluck following Friday’s performance.

“Come Sit at the Welcome Table” will feature more than a dozen songs, including selections in Hebrew, Zulu and Bosnian. The program accompanying the performances will include translations of songs not sung in English. A handful will be sung in Spanish, including a version of “This Land is Your Land” sung in both English and Spanish, as a way to welcome the increasing number of native Spanish speakers in the country, Roma said. Local Argentinean expat Mariano Rios worked with the choir on a song from Argentina called “Solo le pido a Dios” (“All I ask of you God”). He spoke into a tape recorder so the singers could get the nuances of Argentinean Spanish, she said.

There is a sense of community inherent in the very act of singing, said Roma. To play in an orchestra, one has to know how to play an instrument in order to participate, she said. In a choir, however, all one has to do is show up. To that end, the WHC has drawn people from all over, geographically and otherwise. There are participants from Dayton, Cincinnati, Middletown and across the Miami Valley. Choir members range from 14 to 95. Nine Antioch students are participating this year as well, Roma said.

The choir meets to practice once a week throughout the year, with practices doubling in the month leading up to the show. The choir boasts 60–70 regular participants, with around 100 people singing in the upcoming shows.

“If you call yourselves the ‘World House Choir,’ you’d better be prepared to have a world house in there,” Roma said.

Moreover, in an attempt to include even more people, the rehearsals offer childcare for those participants with families.

Of the WHC’s many participants, some have sung in groups before, some have professional training, and some have experience singing only in private venues like their showers and cars. But a singer’s lack of experience is buoyed by the skills of other participants — the voices encourage each other, and people end up being capable of much more than they thought they were capable of, she said.

“People have so much joy they want to share,” Roma said.

John Snoddy and Monika Werling, both of Yellow Springs, said they hadn’t sung in any productions or groups since at least high school. Werling mentioned that she was rusty as well, but the openness and nurturing nature of the group had her hooked from her first rehearsal.

Snoddy likened singing in a group to riding a bike — an understanding of musical dynamics is always there, it might just take a while to get back into the swing of things.

The rigors of choir life were on display at a recent rehearsal. Roma walked from the sopranos to the tenors and around the room, stopping songs if she heard a pitch that was slightly off or a crescendo that swelled a little too quickly.

Roma’s demanding, Snoddy said. “She has an idea of how it should go and you’re going to do it that way.”

But getting the timing of each note right does justice to the emotion behind the songs, which is exactly why the songs are so powerful. Werling said that for her, one of the most moving pieces in the upcoming show is “Prayer for the Children.” The song was written by a man who worked in a hospital during the Balkan conflicts. He returned from lunch one day to find a bomb had destroyed the hospital. He wasn’t even a musician or a poet, Werling said, but he was so taken with the scene that he had to translate his sorrow into music. Just talking about some of the songs gives her chills, she said.

“It is such a spiritual experience,” Werling said. “The feeling is hard to describe, and I’m not usually one that’s short on words.”

The gravity of the performances will be further heightened with the inclusion of some visual art components. Deb Housh, a member of the choir and an art teacher at Shawnee High School, helped coordinate an interactive art installation involving the school’s Art Club. Each year Art Club chooses a service project, and this year the students will be supporting the Syrian refugee crisis through art making and fundraising, Housh said. Drawing and writing utensils will be on hand at Friday’s show, and attendees will be invited to write messages of peace on hand-shaped cutouts of various skin tones, which will ultimately be integrated into an interactive art exhibit at the Springfield Museum of Art. At Friday’s concert (and at other community events throughout the year) the Shawnee Art Club will be taking donations that will be sent to the International Rescue Committee to provide aid to Syrian refugees. Local artist Beth Holyoke, who currently has an exhibit in the Dayton Peace Museum, will also have pieces on display at the upcoming performances.

“The performances bring all kinds of art together to have the biggest emotional impact,” said Lisa Kreeger, a singer and part of the World House Choir’s board.

Many singers referenced the sense of community that comes with singing with other people, and the expressions on the singers’ faces hinted at the transcendent effects of 100 people working together to create the soaring melodies.

“There’s something innate about music that speaks to all human beings,” said Yellow Springs resident and choir member Toni Laricchiuta. “We have an attraction to music like eyes are attracted to light. The vibrations, the rhythms — music is fundamental to humanity. It keeps us working as one body for one purpose.”