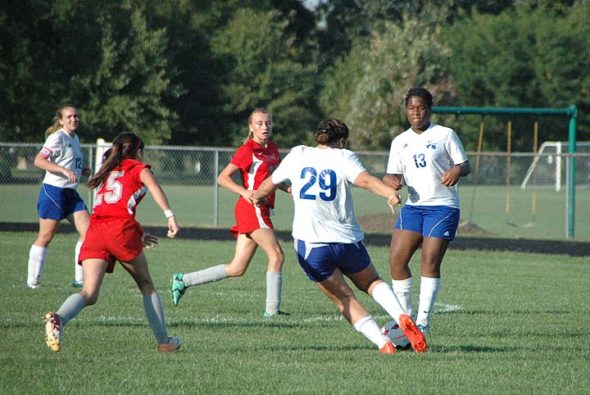 Yellow Springs Bulldog Madison Keller, #29, moves the ball, with teammates Reese Elam, #13, and Janine Stover, #12, at the ready. The girls soccer game was one of four athletic events hosted at YSHS last week, and was punctuated with mandatory water breaks due to the impressive late summer temperatures. While the Bulldogs put up a valiant fight, they were conquered by the Trojans, 7–1. (Photo By Dylan Taylor-Lehman)

The lady Bulldogs hosted the Southeastern Trojans on an unseasonably warm Sept. 22, one of the many bouts of competition that took place that day on YSHS’s home turf. Both JV and varsity volleyball teams were engaged in mortal combat inside the gym, while the boys soccer team was champing at the bit to play their game following the girls’.

Girls soccer coach Bill Houchins said this year’s team is a good group who really play to the best of their abilities. But the number of injuries and dearth of subs consigned the team to a defeat at the hands of the Trojans. Despite some picturesque saves, the Trojans were quick to score, and netted three goals within the first 12 minutes. Houchins, who has coached club soccer for 16 years but is in his first year as a coach for YSHS, said the Bulldogs had a few nice runs and some shots on the goal, but the effort wasn’t enough to overcome the Trojan onslaught. The Bulldogs ultimately succumbed to the Trojans 7–1, and likewise fell to Division I team Springfield Wildcats 10–0 on Sept. 24.

“I know every game is important,” he said, “But conference games are especially important.”

Sophomore goalie Dylan Rainey had a shut out, blocking all four enemy attempts on the goal, while seniors Joe Plumer scored two goals and Augie Knemeyer scored one. Senior Eliot Smithberger and sophomores Jesse Linkhart, Taymour Fultz and Lucas Hudson Groves all scored a goal each. The final score was 8–0.

On Sept. 24, the Bulldogs played the Fairborn Skyhawks, who are a Division I school and member of a large conference. The teams are rivals, VanAusdal said, which always makes for a good game between the two. Rainey once again had a shutout, blocking no less than eight attempts on Yellow Springs’ net. However, VanAusdal pointed out, the defense had a lot to do with Fairborn’s inability to score, and the Bulldog offense continually “pummeled” the Fairborn defense. The Bulldogs ended the game with a 3–0 victory, with Krier, Hudson Groves and junior Fisher Lewis contributing the goals.

“I feel like we could defeat anybody now,” VanAusdal said.

The JV Lady Bulldogs likewise hosted and defeated Bethel in two sets on Sept. 19, 25–20 and 25–15. The Bulldogs started out slow as Bethel reached a four-point lead in the first set, but the lady Bulldogs soon overpowered Bethel with the help of junior Raven James who had 6 digs and 6 aces. Junior Elly Kumbusky also contributed 10 digs to the win.

The varsity Bulldogs are now 9–3.

The JV lady Bulldogs crushed Dayton Christian in two sets 25–11 and 25–10 on Sept. 22. The team played strong and took a wide lead in both sets. Sophomore Kayla Brown had 2 digs and 3 assists and freshman Olivia Snoddy had 2 aces.