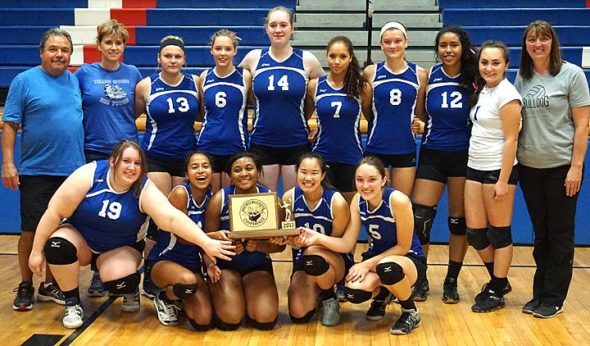 The Bulldogs finished up their season this week, playing four games in just one week’s time. The first game was on Tuesday, Oct. 11, at Dayton Christian. In the first set, Elle Peifer tied her previous record of 16 straight points, and led the team with a total of 18 points (3 aces) and 4 kills. Danny Horton showed off her great serving skills by scoring 9 points (4 aces) and putting down 3 kills. Kasey and Tyler Linkhart each had 7 points and 5 aces, while Kasey put up 15 assists for the Bulldogs. Tyler put up 11 assists and had a total of 7 kills on the night. Alex Ronnebaum also put down 7 kills against the Warriors. Yellow Springs wasted no time in defeating their conference rival 25–6, 25–12, 26–24.

The next night, the Bulldogs headed to Middletown Madison to take on the Mohawks. The Mohawks proved no match for the Bulldogs as, once again, they finished the match in just three sets, 25–17, 25–12, 25–23. Tyler Linkhart led in serving with 17 points (2 aces) along with 13 kills and 13 digs. Ronnebaum followed up with 8 points and 12 kills. Kasey Linkhart, Peifer and Payden Kegley each scored 6 points for Yellow Springs.

The final match of the season was also Senior Night for the Bulldogs, hosting Middletown Christian. As the Bulldogs played their seniors for most of the match, they were able to handle the Eagles easily, winning 25–15, 25–17, 25–12. This win secured the second straight Metro Buckeye Conference title for the Bulldogs. With the Eagles faltering in serve receive, Peifer scored 18 points (2 aces) and Kasey Linkhart put 13 points (4 aces) on the scoreboard. Linkhart also put up 14 assists for the Bulldogs as Tyler Linkhart used 10 of those sets for kills, followed by Liz Smith with 5 kills. Horton served 3 points and had 8 digs for the Bulldogs, with Aliza Skinner putting down 1 kill and 2 digs in the match. There were many smiles and tears in the gym before and after the win as the players, coaches and parents watched the seniors play their last home match.

“They had their minds set on winning the conference title again and they accomplished just that,” said coach Christine Linkhart. “They are all such great athletes. And I’m really going to miss these seniors. They have been playing for me for almost as long as I have been coaching. It’s a bittersweet night”

The Bulldogs also played a sectional tournament match on Saturday, Oct. 15, at Troy High School against Russia. But the busyness of the week seemed to have gotten to the Bulldogs; they just couldn’t pull out a win against the Raiders, losing in three sets, 14–25, 10–25, 14–25. Kasey Linkhart led the team with 6 points, 6 digs and 3 assists while Ronnebaum had 4 points, 1 kills, and 4 blocks.

“They played hard, but they just couldn’t quite overcome the Raiders’ offense,” said coach Linkhart. “Actually, the Raiders’ defense was good, too — they dug up almost everything we hit at them. I’m a little sad it ended this way but we had a good season. We can be quite happy knowing we are the MBC champs for two years running!”

The girls soccer team also drew their season to a close, playing their final game last week against Middletown Christian. Coach Bill Houchins expressed admiration for the team’s increasing focus and strategy as the season progressed, noting that the players were much more attuned to the nuances of each game, and responded accordingly.

Unfortunately, however, end-of-season fatigue set in and the Bulldogs were not able to snag a victory, losing to the Eagles 4–0. Houchins cited the lack of available subs as one factor, as it was difficult for the players to maintain endurance, he said.

“Had we had a full squad, we could have been a little more competitive,” he explained.

Nevertheless, he said everyone on his team plays to the last whistle, with their hearts firmly in the game. That’s all he can ask for as a coach, he said. Next year the team will have players with significant club experience, and will keep building on the foundation already established.

The boys soccer team played their final two games of the season last week as well. The Bulldogs’ crusade against Dayton Christian ended with a 3–3 tie, and the team ended the regular season with a resolute 6–0 rout of Greenview. The boys soccer team finished with a record of 11–4–1, with a 3–1–1 record in their conference.