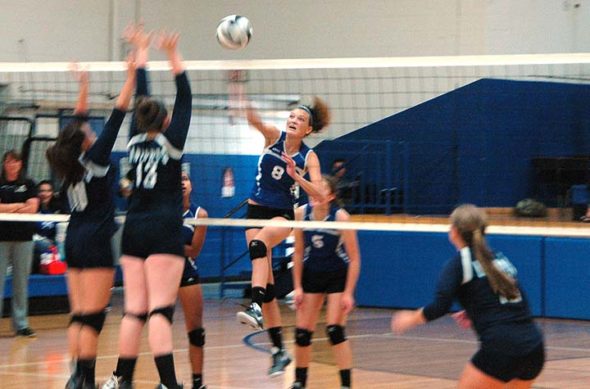 The Bulldogs picked up a nonconference game against Northeastern High School on Sept. 26. Excellent defense by both teams ensured long rallies during all five sets. Going into the fifth set, the Bulldogs found themselves down 1–9. A missed serve by the Jets let the Bulldogs see a window of opportunity on which they pounced. With excellent serving by every player and strategic hitting and blocking by Tyler Linkhart (11 points, 3 aces, 14 kills, 6 assists, 7 blocks, 24 digs), the Bulldogs were able to tie up the game at 13–13. But the Jets were able to side out, making the game 13–14, and they ran with the advantage. The Bulldogs tried to attack the ball hard, but despite one of many huge blocks by the Bulldogs, the Jets were able to hit the ball off their arms to win match points. Yellow Springs played a great match but the Jets came out on top in five sets, 17–25, 25–17, 25–14, 18–25, 13–15. Sophomore Alex Ronnebaum led the team in blocks (14 points, 2 aces, 10 kills, 17 blocks, 12 digs) while junior Payden Kegley led the Bulldogs with a career game high of 44 digs (5 points, 2 aces). Senior Kasey Linkhart served up 12 points (11 assists, 5 kills, 16 digs and 5 blocks) while senior Julian Roberts reached up high to put up three blocks against the Jets’ strong outside hitter.

“Despite losing, this was a fun game to coach,” said coach Christine Linkhart. “We were evenly matched and neither team was willing to budge an inch for the other. The only thing better would be if we had won!”

After the loss to Northeastern on Monday, the Bulldogs traveled to Middletown Christian to take on the Eagles in a Metro Buckeye Conference match on Sept. 27. Yellow Springs continued their hard play from the night before and beat the Eagles in just three sets, 25–12, 25–16, 25–16. Kegley led the way in scoring with 12 points, 1 ace and 9 digs, followed by Kasey Linkhart’s 9 points, 1 ace, 14 assists and 2 blocks. This match turned out to be more of a serving game, with the Bulldogs serving up more total points than the Eagles earned. Ronnebaum had 9 kills and 5 blocks while senior Liz Smith had 6 kills and 10 digs. Once again, Roberts was soaring high above the net. She had her hands in the faces of the opponents, harassing them enough to make them hit high balls to the Bulldogs defense, making for easy passes up to the setter.

Beginning the second round of conference play, Yellow Springs hosted the Legacy Christian Knights on Sept. 29. The Knights were coming off some great wins against opponents and had some momentum coming into the evening. The Knights kept a lead of several points at the start of the first set, but when the score reached 9–12, the Bulldogs finally decided that they had had enough. Ronnebaum (4 points, 1 ace, 4 kills, 3 blocks) went back to serve up four points to take over the lead. The shift of momentum was quite apparent, as the Bulldogs played flawlessly from that point on. Kasey Linkhart finished the set by serving 7 of her 22 points (2 aces, 1 kill, 13 assists, 6 digs). The second and third sets also belonged solely to the Bulldogs, with Kasey Linkhart serving up 11 in a row the second set and junior Elle Peifer scoring 9 straight in the third set (12 points, 1 ace, 2 kills, 9 digs). Senior Danny Horton packed in 5 points (2 aces, 2 digs) and junior Kelsie Lemons contributed with 5 points (2 aces, 1 kill) to seal the victory. The final scores were 25–14, 25–11, 25–16

“I can’t tell you how proud I am of this team. They are such smart players,” Linkhart said. “I had laryngitis so they couldn’t hear anything I was trying to tell them. In time-outs or mid-court huddles, they were the ones deciding what changes needed to be made. And, obviously, it worked!”

Linkhart noted that Senior Night will be held on Oct. 13 against Middletown Christian, which is the volleyball team’s final game of regular season.

“I have coached these five seniors since they started playing in seventh grade. They are not only a great group of athletes but amazing people. It has been such a pleasure for me to watch them grow into the incredible women they are today. I encourage the community to come out to support our Bulldog seniors (and team) on the last home match they will play.”

Last Saturday, the Yellow Springs Bulldogs turned in the best times in 19 seasons at the Buck Creek Cross Country Invitational. The Buck Creek course is notoriously challenging, with the final hill a particular challenge. The girls high school team — small but mighty, with three girls running — all turned in season bests, with Jude Meekin running the 5K race in 22:50.8, Olivia Brintlinger-Conn running it in 23:04.9 and Krista Romohr in 26:40.8, cutting more than two minutes off her personal best. The high school boys excelled as well, with the top seven under 21:30 for the 5K. Levi Brown led the pack at 19:30.6, followed by Kaden Boutis who turned in a 19:55.3; Zack Brintlinger-Conn ran it in 20:04.6, with Jack Runyon right on his heels with 20:16.2, Zach Lugo at 21:01.1, Grant Crawford at 21:10.1 and Aiden Hackett at 21:25.2.

The McKinney boys fielded five runners, led by Connor Raymer at 15:09.8 for the two mile race, followed by Sam Lewis at 16:13.7, with Maddox Flatt right behind him running his personal best at 16:16.8. Gideon Naziri turned in a 16:58.6 and Quinton Cole ran 18:00.2. The teams look forward to this weekend’s meet at Legacy Christian in Xenia, another hilly course that features woods and even a stream crossing.