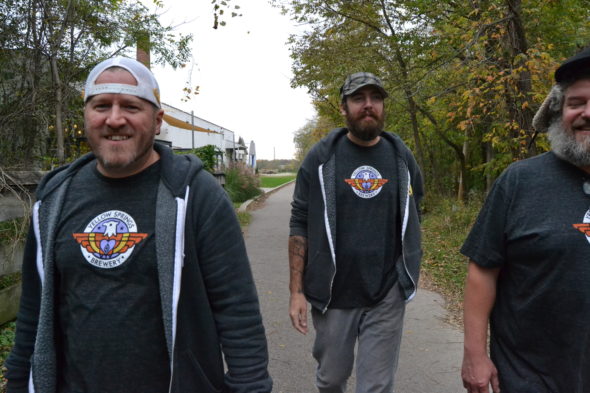 Since its opening in 2013, Yellow Springs Brewery has hardly stopped growing and changing; demand for the brewery’s craft beers has never slowed, and the business has expanded more than once to keep up.

This evening, the YS Brewery will host a “Metamorphosis Party” to celebrate its journey of change, and to unveil a new look for the local business. The event will kick off at 3 p.m., and will continue until 10 p.m.

According to a press release this week, the YS Brewery commissioned a new logo from Dayton-based artist Don Pendleton, who is known for his artwork with skateboarding companies Alien Workshop and Element. The artist also won a Grammy Award for his work on Pearl Jam’s 2013 album “Lightning Bolt.” The new logo features an eagle with a heart of hops.

“Eagles can meat a lot of things — freedom, strength, vision — but to Yellow Springs Brewery, the eagle suggests a certain spirit,” said YS Brewery’s co-owner Lisa Wolters. “A spirit that means you have the freedom, strength and vision to reach higher, to not just accept the status quo, to embrace new perspectives and to dream.”

Harvest Mobile Cuisine, a local food truck favorite, will be on site, offering Captain Stardust bratwurst, and a photo booth will be set up in the brewhouse. Don Pendleton’s paintings will also be on display in the taproom, alongside his new can designs.