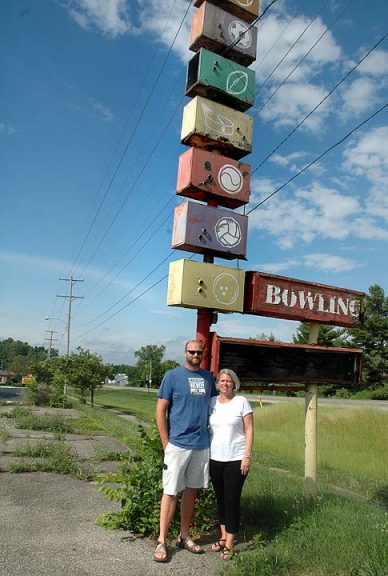 Nate Cornett and Lisa Wolters, owners of the Yellow Springs Brewery, recently purchased the old bowling alley on the south edge of town to use as a warehouse distribution center. (Photo by Diane Chiddister)

Nate Cornett and Lisa Wolters had a plan when they opened Yellow Springs Brewery three years ago, but things haven’t exactly worked out. They hoped to grow their business, of course, but at a rate they could keep up with.

Instead, according to Wolters last week, “We’re always chasing some bottleneck. Now, we can’t can enough.”

The Yellow Springs Brewery has grown far faster than either imagined. It’s a good problem, of course, but fast growth comes with its own challenges. Almost a year after the brewery began canning its beer and selling wholesale, the company now needs more space for storage.

So last week the couple purchased the former bowling alley, most recently an auto repair space, on U.S. 68 on the south end of town, next to Village Automotive. That space will become a warehouse distribution center, complete with room for 18-wheelers to unload cans, as well as refrigerated space for cold storage. The brewery taproom will remain at the MillWorks location.

Expecting runaway growth should be the norm for the couple by this time. Eight months after Wolters and Cornett opened the business, a Yellow Springs Brewery beer won a silver medal at the Great American Beer Festival (the “Superbowl of beer”) in Denver, bringing considerable attention to their product. That win led to a listing in “Breweries to Watch” in the Beer Advocate magazine, which created more buzz.

Three years later, the brewery has created 25 to 30 beers, with their biggest sellers the Captain Stardust saison and Zoetic American pale ale in cans. Less than a year into canning their product, the brewery has 450 wholesale clients among the bars, restaurants and package stores of Dayton, Columbus and northern Cincinnati.

Standing inside the former site of the bowling lanes last week, Cornett and Wolters surveyed the large empty space of their new building, now littered with dust, debris and the occasional vintage Buick convertible. It takes vision to imagine the space as a warehouse, but Cornett has the vision, his wife said. A former IT contractor, Cornett once worked as a plumber, so he looks at things structurally, and the structure looks right for their needs.

Ironically, when Cornett and Wolters first began seeking a location for their new beer business, they considered a small portion of the bowling alley. Now, they’re buying the whole thing.

Cornett and Wolters began searching for a warehouse space about six months ago, after it became clear that there was no more space to expand at MillWorks. While they preferred to stay in Yellow Springs, no appropriate space was available, so they looked all over Greene County. Still, nothing worked.

Then local landlord Bob Baldwin suggested that they ask Village Automotive owner Todd Fritschie if he wanted to sell the bowling alley, which he had purchased as additional space for his business. Although Cornett and Wolters were skeptical that he wanted to sell, they asked anyway and were surprised to hear that he did.

The parties closed on the deal in mid-June, at a price of $205,000, and Fritschie has 90 days to remove his cars and equipment. The brewery will soon begin its own cleanup of the space, which Cornett expects to begin using this fall.

While some call the current micro brewery craze a “renaissance” in craft beer, Cornett begs to differ. Rather, he sees the popularity of beer produced by small companies as a “correction” following decades of corporatization. It’s a return to the period before Prohibition when 3,000 small breweries thrived across the land, he believes.

“Every small town had a brewery,” he said.

And now Yellow Springs has one too. The brewery opened its taproom and production space at MillWorks in spring 2013, with master brewer Jeffrey McElfresh and a handful of employees. Now, the brewery has 26 workers on its payroll, or 16 fulltime equivalencies.

The MillWorks taproom and deck are most often crowded these days (locals tend to visit during the week) so that Cornett and Wolters are turning their attention to wholesale. Their initial intent was that wholesale would provide 80 percent of their sales, but taproom business has far exceeded expectations, currently providing about 80 percent of brewery revenue. The couple hopes to beef up wholesale so that the balance is 50/50, which they consider more sustainable.

“Who knows how long destination travel will continue?” Cornett said.

But by the looks of the Yellow Springs Brewery, destination travel isn’t going away any time soon.