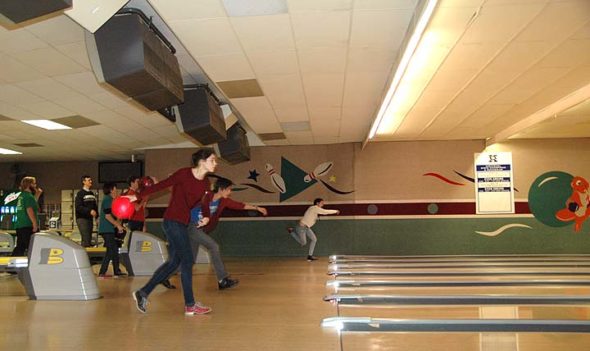 Lilly Bryan, Jonah Trillana and Kallyn Buckenmeyer tried for strikes at Beaver-Vu lanes last week during one of the YSHS’s bowling team’s practices. Bowling is a new sport at the high school this season, with 14 students on the team. “Bowling is one of the best things anyone can do,” said coach Matt Cole. “I’ve never known anyone who’s had an awful time bowling.” (Photo by Dylan Taylor-Lehman)

“I personally believe there are many similarities between bowling and life,” said Matt Cole, coach of the Yellow Springs High School’s new bowling team, a winter sport that debuted this season. “A successful life is like a successful bowling game.”

Cole was in the middle of one of the team’s thrice-weekly practices, and was explaining the lessons that bowlers can take from the sport. Each player is only as good as they push themselves to be, he said. When it comes to staring down the 10 pins at the end of lane, only the bowler is responsible for the outcome, a precept applicable not only to bowling, but to life.

“All that matters is that moment,” Cole said. “You always have to be rebooting your mind. You forget the five previous crappy frames and focus on the present.”

Moreover, bowling a social sport, he said, with no hitting or getting out of breath. Bowlers are able to enjoy each other’s company while working on their technique individually. Indeed, the bowlers on YSHS’s inaugural bowling team were happy to be there, laughing, grabbing sodas from the snack bar and getting right down to the game.

The team gathered last Friday at Beaver-Vu Lanes, in Beavercreek, as it does three times per week. The team boasts around 14 members, spanning all high school grade levels. Bowlers arrived with their new personal bowling balls, whose finger holes had been custom fit to their hands. Some players already had professional ball bags and shoes, while one student carried his ball in a reusable Trader Joe’s grocery bag. To this reporter’s eye, the group was endearingly ragtag, like the underdog team of a family sports movie.

“[The bowling team] is a good group of people,” said sophomore Hannah Lawson. “And we’re getting closer each practice.”

The team spread out across eight lanes for an hour and a half of essentially unlimited bowling. Friday was the team’s ninth practice, and they were preparing for their first match on Tuesday. Senior Windom Mesure said the practices take a “rinse and repeat” format, as players are taught a technique and practice it as many times as they can.

The idea of a YSHS bowling team was initially broached four years ago, but it stagnated for bureaucratic reasons, according to Cole. Last school year, however, incoming athletic director Nate Baker took to the idea of a bowling team, and helped get it off the ground and schedule its matches.

Students eagerly signed up when the team was announced. Few of the students had much bowling experience beyond the occasional birthday party or outing with family, though several students come from families with top-tier bowlers: freshman Zoe Clark’s great-grandfather is in the Bowling Hall of Fame, while junior Kallyn Buckenmeyer boasts four professional bowlers in her extended family.

Before long, the novice bowlers were making significant improvements. Basic bowling strategy includes a four-step approach to rolling the ball, sophomore bowler Lawson explained. Bowlers are supposed to time their steps so that their fourth step coincides with the release of the ball. The body’s inertia helps carry the weight of the ball and propel it forward. Flicks of the wrist add different spins, which can be used to direct the ball toward specific pins, Lawson said.

Cole pointed to Mesure as an example of what a little instruction can do. Mesure wouldn’t stop skipping during his approach, Cole said, so he helped him learn a rare two-handed technique, in which both arms are compressed and launch the ball down the lane like the shooter in a pinball machine. Such an approach calls for a skip, and Mesure was able to pick up the technique with ease. When freshman Eric Hansen started, he had only bowled with his grandma. He had no timing and no concept of where to throw the ball, Cole said. Now, he slides his right foot during the approach and keeps his hand in the right position.

“We are witnessing a milestone in his bowling experience,” Cole said. “When we’re done, we’re all going to be 200-level bowlers.” (Three hundred is a perfect and fairly rare score; a 200-level bowler is considered very good.)

In many ways, the bowling team was waiting for Cole. His success and lifelong affinity for the sport made him the perfect choice to coach the Bulldogs, a gig he undertook happily when it was offered.

Cole has been bowling in leagues since he was six, when he took it upon himself to introduce his mom to the secretary of a local bowling league in order to sign him up for competition. Bowling became a fixture in his life, and during the more than 10 years that Cole and his wife lived in southeast Asia, he competed in numerous international bowling tournaments, and even won a few in the process. The couple eventually moved to Yellow Springs on the recommendation of resident Lee Kibblewhite, whom they’d met in Indonesia. Cole and his wife previously ran a silver jewelry company, and upon returning home, he took to making jewelry out of old bowling balls. (A bowler that takes the sport as serious as he does will build up a backlog of retired balls, Cole said.) He eventually went back to school to get his accounting decree, and now works as an accountant in the village. Cole continues to bowl religiously, including weekly league play.

The YSHS team, clad in its regulation bowling shirts and black slacks, will play almost two dozen matches over the course of the season, hosted by a number of the area’s finest bowling alleys. While there is something to be said about victory over rival schools, seeing one’s game improve and having fun while doing so is a thrill characteristic of the sport.

“Bowling is one of the best things anyone can do,” Cole said. “I’ve never known anyone who’s had an awful time bowling.”