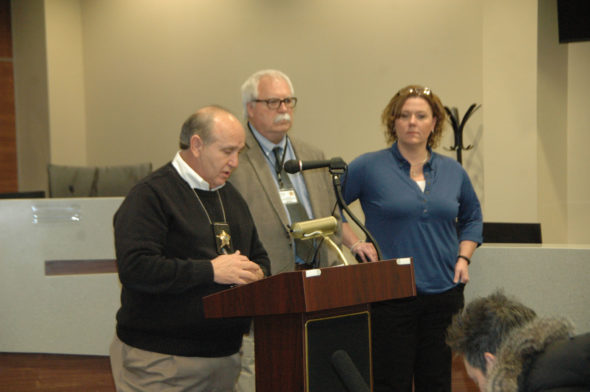 Greene County Sheriff Gene Fischer (left) leads a press conference on Wednesday afternoon in Xenia. Standing next to Fischer is Captain David Tidd, who is overseeing the investigation, and Kelly Edwards, the lead detective on the case. (photo by Dylan Taylor-Lehman)

Investigators held a press conference in Xenia this afternoon in order to provide an update on the investigation into the murders of William “Skip” Brown and Sherri Mendenhall, who were found deceased at 4444 East Enon Road on Sunday.

Greene County Sheriff Gene Fischer said that investigators believe the shootings were not random, adding that Brown appeared to have been targeted. Authorities released no further information about possible motivations.

Investigators have conducted “more than three dozen interviews” so far in the investigation, Fischer said. “Several items of evidence” were gathered from the scene of the crime, but he declined to answer what those items were or why they were of importance.

“Most of the time there are witnesses and evidence that would indicate [who may have been responsible],” Fischer said, “but this case is not like that.”

In the meantime, the Sheriff’s Office has set up a tipline for any information about the murders. Anyone with any information, “no matter how trivial,” according to authorities, is encouraged to call and leave a message.

There has been a “tremendous response” to the tipline so far, Fischer said, adding that investigators will “aggressively pursue” any tip they get.

Another press conference will likely be held on Monday to update the public on any developments.