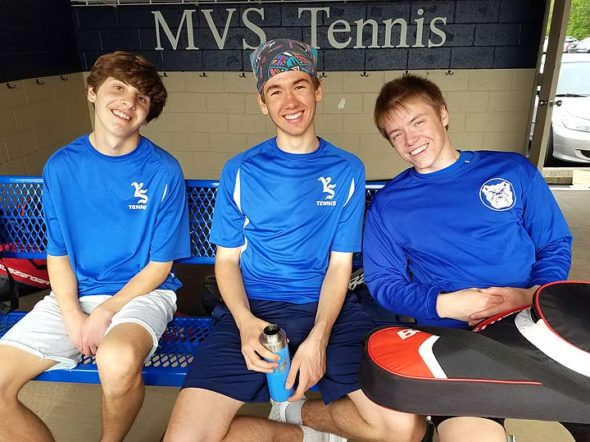 By this time of the year, springs sports have long been in full swing – literally. The YSHS Bulldogs are swinging tennis rackets and softball bats with characteristic aplomb, their athletic prowess buoyed by the incredible weather. While everyone knows winning isn’t everything and it’s just a game and all that, a certain satisfaction comes from adding checkmarks to the win column, especially when it comes to head-to-head bouts with perennial conference rivals.

The Yellow Springs Lady Bulldog softball team traveled to Dayton Christian for a Metro Buckeye Conference game last Thursday. The Bulldogs were on top of their game, scoring early and often and ultimately defeating Dayton Christian by a punishing final score of 20–1. The Bulldogs scored 10 runs in the first inning to take control of the game and scored at least one run in every inning thereafter.

“It’s always nice to get a win against Dayton Christian,” said coach Jimmy DeLong. “They had beaten us by at least 10 runs in every game I’d coached against them until last year. Times have changed.”

Hitting stars for the Bulldogs were Hannah Morrison and Elly Kumbusky, who each got on base five times, and catcher Danny Horton, who got on base four times. Gracie Price, Kelsie Lemons and Brielle Willis each had two hits for the team, with Willis scoring three runs. Kumbusky and Morrison are focused hitters when they step into the batter’s box, DeLong said, and they both seem to find a way to get on base for the team. Morrison, who also pitches, shut down the Dayton Christian offense. She tossed a complete game one-hitter with 10 strikeouts and didn’t walk a batter. Ever-enthusiastic, DeLong commented that “Morrison has been dominant in MBC league games; her strikeout to walk ratio is off the charts — 41 strikeouts compared to zero walks. That is an unheard of statistic for a pitcher.”

The defensive play of the day was turned in by shortstop Kadie Lafferty, who fielded a hot-shot ground ball in the hole at shortstop that deflected off the glove of third baseman Brielle Willis. Lafferty immediately turned after grabbing the ball and fired it to first baseman Gracie Price to get the batter out. “Lafferty is a three-year starter who has really blossomed on defense this year,” Coach Jim said.

The win against Dayton Christian improves the Bulldogs MBC record to 3–0.

The Bulldogs also hosted Cedarville last week in a non-conference game. After falling behind 5-4, the Bulldogs scored three runs in the fourth inning. Singles by Lafferty, Morrison and Gracie Price tied the game, which soon turned into the lead on a clutch two-out, run-scoring hit by Elly Kumbusky. The Bulldogs eventually won by a score of 9–6.

Morrison pitched a complete game for the victory, striking out the tying runner at the plate to end the game. “The key to victory was her control and our defense,” DeLong said. “She didn’t allow any walks and our defense did an outstanding job of making the plays today. It was a hard fought victory.”

Last week, the Bulldogs extended their winning season with two victories over Urbana and Valley View. Sweeping all five courts against both competitors, the YSHS holds an impressive 8–2 record.

In an exciting three-set match against Urbana, the first doubles court, comprised of Kasey Linkhart and Dylan Dietrich, turned the tides and came back from a first set deficit to win their match, 3–6, 6–4, 7–5. Simply put, said coach Stacey Knemeyer, Linkhart and Dietrich just wanted it more.

“The two showed a side of them we had never seen,” she said. “We just knew they were going to find a way to win. Linkhart and Dietrich played their hearts out and we couldn’t be more proud.”

In building for next year, the team’s younger players are gaining experience and confidence in their abilities, Knemeyer said. Tyler Linkhart, Abby McAnerney and William Gregor in particular are showing very nice improvement in match play from where they started the year.

With tough conference matches against Dayton Christian and Xenia Legacy this week, emphasis is now placed on honing individual skills.

“While our players are winning most of our matches,” Knemeyer said, “we must continue to refine our game and maintain a positive, ‘we can do this’ attitude.”

The YSHS girls finished in fifth place at the second annual Greene County Invitational last week, and the boys finished in eighth. Every high school in Greene County participated in this unique meet. The Bulldogs were led by a new school record in the shot put by Jasmine Davidson, whose 33´3.5˝ throw launched her into first place. Other first-place finishes were recorded by Olivia Brintlinger-Conn in the Long Jump, with a 14´7.5˝ leap, and Julian Roberts, who continued her unbeaten streak in the 300-meter hurdles, finishing in 48.13 seconds.

Amani Wagner placed second in the discus with a heave of 98´8˝ while True Hall sped to a fourth-place finish in the 100-meter hurdles. Other scoring performances were achieved by Payden Kegley and Ayanna Madison, as well as the 400 and 1600 relay teams.

The boys were led by James Browning who leapt to third place in the high jump (5´8˝) and was fifth in the discus. Sam Wildenhaus earned a solid sixth in the 3200 meters, as did the 3200 relay team of Eli Capasso, Zach Lugo, Noah Krier and Sam Wildenhaus.

The Bulldogs will split the squad with the majority of the team competing in the Mechanicsburg relays on Friday, and several  Bulldogs going to the prestigious Wayne Invitational on Thursday and Friday.