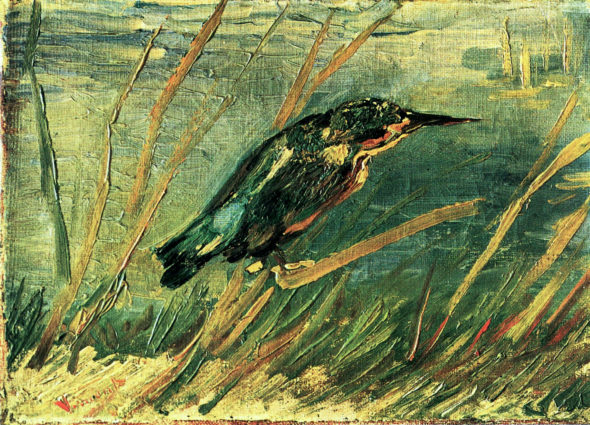 The sap rises. The trees leaf out and bloom. You / Suddenly sense: you don’t know what. An exhilaration that revives / Old views and surges of energy or the pure pleasure of / Simply looking.

—From “Hymn to Life,” by James Schuyler

We took the long way around Ellis Pond, stopping to observe a kingfisher pair. Big dark heads, a call like a rattle and wings that opened smartly as scissors. We looked for the Great Blue Heron, but didn’t see him — or her — solitary dweller in the stream and weeds. We saw Canada geese, of course, and the one white goose that’s accepted as part of the flock, despite a look that’s decidedly odd — by Canada goose standards.

We saw the black cows, staring with mild faces, the train of thought chugging sweet and slow, like the green grass juice it takes several stomachs to properly digest. Our passage barely distracted them from their gentle concentration. Only the bull seemed truly preoccupied, rubbing and rubbing his great head against a tree by the creek. He was nearly human in his perplexity, and his urge to resolve it.

We saw no bluebirds on the wires, no swallows swooping — soon we will. Looking forward to them was almost as good as looking for them, and we looked forward to the indigo buntings, too, their flit and flash of outrageous blue. Buntings out-blue the bluest summer day; they’re blue to a higher power: deeper, richer, more thrilling. Even their song is song squared, every sweet note doubled.

We turned up Ellis Spur, and our little dog — finally catching on that this was a Big Adventure Walk — threw his head back and grinned. Our business was walking; his business was smells. He gunned his nose, flying it like a cabin cruiser over the olfactory waves, letting the wake of his body follow. Then abruptly cut the engine, and idled. His rapid shifts in speed made us a little seasick.

Up the slope we went, over the flotsam of last year’s honey locust pods, brown, beautiful and curled like claws. In the greening grass, all the tiny weeds were shaking out their laundry, hanging their whites and pinstripes to uncrease. And increase, the rule of life, the rule of spring. The honeysuckle was already leafing out, a light green haze that will thicken through spring and summer into honeysuckle smog — a vegetative Los Angeles in our local woods, a bane and a curse.

But for now the woods looked the way I secretly like them best: a forest of branches, every tree a different color, texture, architecture. And behind and between them, a mosaic of sky. Soon enough the green ocean of leaves will flow in. It’s an obliteration part of me longs for — but it’s still an obliteration.

We cut through the bug factory lot (sorry, EnviroFlight!) to Pleasant Street to home, and then it was almost time to get in the car and drive north for the evening. Springfield: a big grassy yard, and the dog and I romped. It’s hilly out that way, and freckling the slopes of an adjoining yard was the bright yellow of lesser celandine. Lesser celandine! I looked it up later, indignant. Another invasive: hard to love, hard not to love. So pretty in the green grass, a reminder of buttercups (same family, in fact), of summer and childhood.

Childhood. In the next yard over, I spied a yellow slide. It was the color of the celandine, faded a little by sun. Suddenly I thought of all the flowers I’d pressed in books as a child: violets, chickweed, miniature roses. I’d meant to preserve them, but what happened instead was a disturbing and disheartening alteration. They looked — so unlike themselves.

The lesson was subtle, intuitive. You couldn’t save things, not really. You could only look at them now.