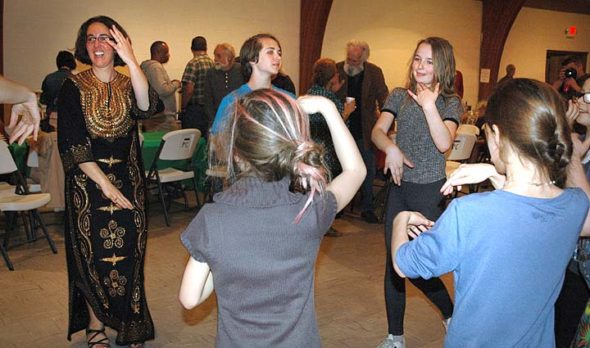 Nacim Sabaji, left, was the organizing force behind a celebration of the traditional Persian holiday Nowruz on Saturday evening, March 25, at the Presbyterian Church. About 150 people, including many from the area’s Iranian-American community and the local Baha’i membership, ate traditional Persian foods, learned about the secular holiday’s customs and closed out the fete with dancing. The joyful gathering stood as a testament against negative depictions of people from Iran as well as travel ban efforts that include Iran among the targeted countries. (Photos by Carol Simmons)

The joy of family, the joy of community, the joy of spring all filled the social hall at First Presbyterian Church last Saturday as nearly 150 people of all ages gathered to celebrate the Persian holiday of Nowruz.

The traditional holiday, which officially falls on the spring equinox, welcomes the new season, and according to the Persian calendar, the new year. The word “Nowruz,” which has a variety of acceptable spellings, means new day, and at its root, new light.

“Naw-Ruz” is how many Bahá’í Faith practitioners spell it, according to Nacim Sajabi, villager and the organizer of Saturday’s event, noting that an annual observance of the holiday has been part of the local Bahá’í community’s calendar for many years. But the local observance was less elaborate and expansive than that which continues to take place in contemporary Persia, the country that we now know as the Islamic Republic of Iran, as well as in many of the nations surrounding it.

Sajabi, whose mother, villager Farzaneh Mader, was born in Iran, said that her family often went to Columbus or Cincinnati when she was growing up to mark the holiday with a larger gathering of Persian heritage. A major component of the celebration is visiting with family and elders.

Although the Bahá’í Faith has made the holiday part of practitioners’ spiritual life, Nowruz is neither religious nor political. It exists outside the geo-political realm, offering messages of joy, love and hope to celebrants of many different faiths and nationalities.

The importance of those messages resonates for Sajabi — this year more than ever, as President Trump continues to try to enact travel bans that include the country of her elders, a country that helped form who she is.

“I was born in the States, but I can really relate to my Persian roots,” she said.

The president’s executive order made no sense to her. “It was really hard to understand why that could happen.”

Sajabi said her family had come to the United State in search of religious freedom, and now they and others from the countries on the travel ban list were being seen as people to be distrusted and feared, as possible terrorists.

The people she knows, the details of their lives, are sources of pride and deserving of honor, she said. “There’s a lot of good.” It came to her that the holiday of Nowruz recognizes and celebrates those positive qualities, and she envisioned an event where we could “come together to be proud of our Iranian and Persian roots.”

For Sajabi, Nowruz has boundless sweetness — “the food, the music, the dancing, the hospitality. You go to see family and they come to see you.”

All those elements were on hand Saturday evening. Once she set her heart on organizing a Nowruz celebration here, Sajabi reached out to family and other community members, including the local Bahá’í membership, for help. “I did a lot of delegating,” she said Saturday night while thanking those who had assisted.

In addition to her mother, an aunt and her grandmother also live in town, as do her brother, Naysan McInargey, and his family. Sajabi estimated that more than a dozen people in the immediate area are connected to Iran through birth or family. Dozens more live in Dayton, Cincinnati and between.

Many helpers cooked traditional dishes — tables full of specially prepared rice and sauces, both meat and vegetarian; salads and deviled eggs; and desserts of varied shapes, colors and textures. Guests ate until they were full, and then ate more.

Poetry played a part in the evening as well, as poems by revered Persian poets Rumi and Hafez were recited.

Hassan Rahmanian, a longtime professor and now dean at Antioch College, put the holiday celebration into a cultural context. History is important to Iranians, he said. “There’s something in history that appeals to us.” He cited some of the contributions Persians have made to the world: road systems, irrigation systems, a central government — all before the Romans formed their empire.

But Iranian-Americans have had a difficult time in the United State since Iran’s 1979 revolution, he said, noting that he has known people to call themselves Persian, rather than Iranian, to avoid negative stereotypes.

After the eating and visiting, the poetry and cultural sharing, came music and dancing. The floor filled with little ones and their parents, klatches of teenagers, adult couples, singles and elders, all laughing and moving with the music.

The happiness and joy was palpable.

Reflecting afterward, Sajabi said the event took on a life of its own.

“This was something greater than responding to Trump,” she said.