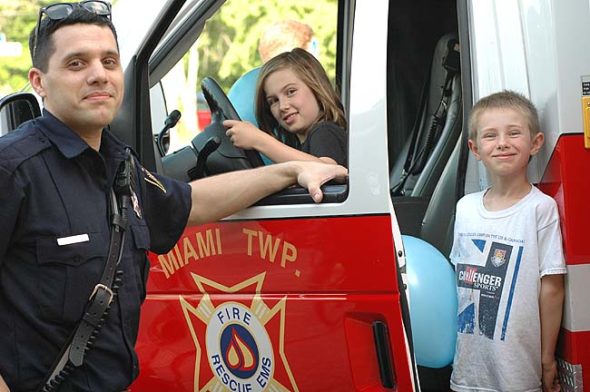 Miami Township ﬁre ﬁghter Joe Panuto opened up one of the department’s medics for Dorothy Paddison and Leroy Gano during a 2015 fundraiser for the Fireﬁghter’s Association. (News archive photo by Lauren Heaton)

The public is invited to an open house at the Miami Township fire station, which will take place on Friday, April 28, from 6 to 8 p.m.

The event will feature rides in a fire truck, tours of the station and the opportunity to discuss the upcoming fire station bond issue with Miami Township Fire and Rescue staff and volunteers.

On May 2, residents of Miami Township will vote on a levy funding a new fire station for the MTFR. The MTFR maintains that its current station is out of code and too small for the size of the department. The new station is projected to cost $5.75 million dollars, which would increase property taxes by around $84 per $100,000 of property value for the next 30 years. If the levy passes, the new station will be built on a piece of property at the south end of the village, and is slated to be completed by the end of 2018.

The station is located at 225 Corry Street.