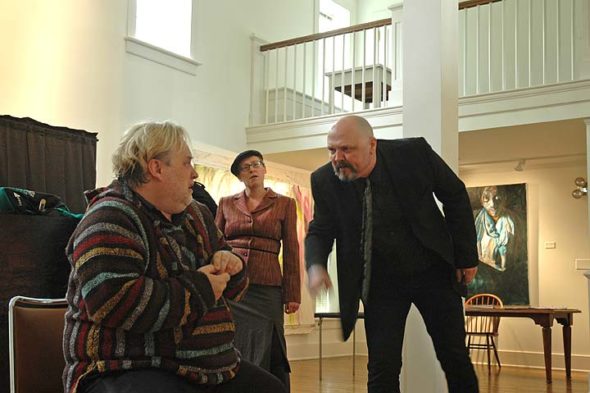 Members of the Yellow Springs Theater Company recently rehearsed for their upcoming production of “An Adult Evening of Shel Silverstein,” a collection of 10 short plays written by the renowned children’s author. The plays showcase Silverstein’s trademark offbeat humor, but take many more liberties with adult content, language and gallows humor. The production debuts this weekend. From left are Rob Campbell, Ellen Ballerene and J. Gary Thompson. (photo by Dylan Taylor-Lehman)

Though it may come as a surprise to some, it’s not uncommon for children’s entertainers to have a rude alter ego. Bob Saget, for example, the loving dad from the ’90s sitcom “Full House” and host of “America’s Funniest Home Videos,” is also known for his explosively offensive stand up routine. A similar dichotomy characterizes the career of revered children’s poet Shel Silverstein, and Yellow Springs is soon going to meet his uncouth other side.

Silverstein was the author of children’s poetry classics like “Where the Sidewalk Ends” and “The Giving Tree,” and he was also a prolific cartoonist, playwright and musician. Ten of his plays have been collected into a piece called “An Adult Evening of Shel Silverstein,” which the Yellow Springs Theater Company, or YSTC, will premier next week. According to Jeanna GunderKline, the production’s stage manager, the vignettes are geared explicitly toward adults. The plays showcase the offbeat humor found in Silverstein’s poems but take many more liberties with content and language.

“Kids will be turned away at the door,” GunderKline said. “We can’t in good conscience let them in. A lot of the language will go over their heads but there are certain gestures being mimicked.”

“When I learned how raunchy it was, I realized I should have tried out,” she added.

Villagers can see “An Adult Evening of Shel Silverstein” on Friday, May 5, and Friday, May 12, at the Herndon Gallery, on the Antioch campus, and Saturday, May 6, and Saturday, May 13, at the Emporium. All shows are at 8 p.m. The shows at the Herndon gallery will cost $10, while those at the Emporium will cost either $13 or $20 dollars, the latter price including a wine tasting. Amy Wamsley, the play’s director, said that both locations offer their own kind of ambiance. The Herndon gallery is classy and bedecked with the huge paintings of its current exhibition, she said, while the Emporium makes for a more intimate and cozy setting.

The play explores a number of interesting situations, such as the harsh interrogation of a man behind some well-known hippie slogans and what happens when one is trapped on the sea on a lifeboat. Many of the vignettes feature unexpected and typically uncomfortable twists on otherwise normal scenarios, such as a father giving his daughter a pony for her birthday.

Silverstein built his career cartooning for “Playboy” magazine and performing as a musician before he was a children’s poet, Wamsley said, writing his own music in addition to many hits for other artists, such as Johnny Cash’s “A Boy Named Sue.” YSTC will play Silverstein’s music between vignettes. Silverstein died of a heart attack in 1999, and the pieces comprising “An Adult Evening” were compiled posthumously from the “hundreds” of plays he had written, she said.

Wamsley said that as soon as she started reading “An Adult Evening” she knew she wanted to make it YSTC’s next endeavor. The YSTC prides itself in being a theater for the community, she said, but that doesn’t mean it always has to do the classics or kids’ plays. “This show is out of the box and different,” she said, which makes it exciting. And how is it different, she asked? “It’s offensive.”

“I found myself laughing the whole time I was reading, but then I’d catch myself and say, ‘wait, this is not [supposed to be] funny,’” Wamsley said. “Everyone in the show has felt uncomfortable at one point or another” with something they’re required to say or do.

A few of the actors appearing in the play said they are excited and challenged by this discomfort. All of the actors were familiar with Silverstein’s poetry, but few knew that he had such an impolite oeuvre. Actor Ellen Ballerene, a Yellow Springs resident and fixture of YSTC productions, figured that 10 relatively short comedic plays would be fairly easy, but “An Adult Evening” has been challenging because each piece has a “dark twist,” she said.

“If you’re always playing the ingénue or goody two-shoes, it’s good to get a villain or something different to chew on,” said Rob Campbell, another village resident and familiar YSTC face. “Being comfortable [in uncomfortable roles] makes it honest and real — you’re playing to situations you hope you don’t find yourself in.”

But according to those involved with the production, the raunchiness serves a purpose greater than being crass for the sake of being crass. Many of the vignettes are thinly veiled commentaries on today’s society and use humor to explore difficult topics. The production deals with topics including gender issues and economic concerns in a perverse way, Wamsley said, while still remaining thought provoking.

“I always get through things by laughing,” she said. “It’s the best medicine. It’s enjoyable knowing that we’re bringing these issues forward in a new way to our community.”

“I really think the community will like it,” Wamsley said. “It’s very Shel Silverstein — very enjoyable and funny.”