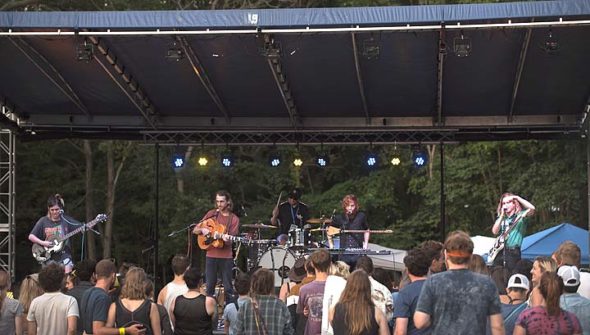 Columbus indie-folk band Saint Seneca headlined last year’s Springsfest, which is returning to the lawn of the Bryan Center on July 8. The festival boasts bands from across Ohio and the US, and will feature a selection of food trucks and beer from the YS Brewery. The festival is organized by Yellow Springs native Connor Stratton, who said the selection of artists will make for a “dance-your-butt-off kind of vibe.” (Submitted Photo)

A dancing vibe at Springsfest, coming back to Yellow Springs

According to practically everyone, sun, music and beer are integral parts of any memorable summer. Who doesn’t like lying out on the grass, drinking a cold beer and getting up to dance when the mood strikes? Such an opportunity is returning to the lawn of the Bryan Center in July, in the form of the second annual Springsfest.

“It makes me extremely happy to do something like this for the community I grew up in,” said Springsfest organizer and Yellow Springs native Connor Stratton.

Springfest will be held on July 8, and will indeed boast a day of beer, food and live music. Like last year, the festival will be served by a number of area food trucks and Yellow Springs Brewery, which are sponsoring the event. The “doors” open at 11:30 a.m., and the first band is scheduled to perform at 12:30. Advance tickets are on sale now for $25 and will be $35 the day of the show. Buying a ticket in advance enters the ticketholder in drawings to win festival shirts or guitar effects pedals from Akron company Earthquaker. “Everything that anyone should need — shirts, tickets, music samples” can be found at springsfestival.com, Stratton said.

Stratton said he “doubled down on talent this year,” impressing himself with a lineup that spans Ohio and beyond. Coming from Columbus are funk/soul/jazz professionals MojoFlo, while dreampop group the Yugos are coming from Cincinnati. Headlining this year is a New Jersey songwriter performing under the soothing moniker Delicate Steve, who plays experimental indie music and is fresh off an NPR “Tiny Desk” concert.

Reflecting on last year’s Springsfest, Stratton said he was happy with the way it turned out but said he felt the music was too chilled out. This year, however, he made sure to book eclectic bands that play lively tunes.

Local powerpop/indie quartet the Speaking Suns will play Springsfest for the second year in a row, an opportunity that guitarist/singer Jacob Diebold said makes for one of the most fun concerts he plays every year. He also appreciates that Springsfest brings bands that would likely never play in Yellow Springs were it not for the festival, like Delicate Steve, he said.

“Springsfest is good for Yellow Springs because the village hasn’t really had an up-to-date music festival for a few years,” Diebold said.

Springsfest is the brainchild of Stratton and Nancy Jane Epling, another Yellow Springs native and current resident of Athens. The two form Great Guys Entertainment, the promoter responsible for Springsfest and the Dayton Music, Arts and Film Fest, as well as monthly one-off shows in southeastern Ohio. Their events typically feature booths with art and food, and their overall approach takes into account Stratton’s background as a touring musician, as his experiences have provided him insight as to what a good event looks like from the artist’s perspective.

Organizing for Springsfest began last September, when Statton “sent out feelers” for possible performers and companies renting stages, lights and, critically, porta-potties. But his work was made a little easier this year because companies sought him out after the success of last year’s festival, he said.

The festival is staffed by an invaluable phalanx of volunteers. A call for volunteers on Facebook led to all 40 volunteer positions being filled in 48 hours, Stratton said. Though concerns about weather and equipment and staying on schedule are an omnipresent part of any promoter’s life, it is thanks to these volunteers that Stratton can appreciate the event in the moment.

“To my surprise, last year I felt comfortable and could enjoy a lot of the fest!” he said.

Stressors aside, Stratton said he loves the challenge of putting the event together and is using the lessons from last year’s festival to keep honing his organizational prowess. All things considered, he is optimistic about the outcome, as it’s hard to argue with the prospect of enjoying music under the sun.

“It’s all coming together in an extraordinary showcase of unique music,” Stratton said.