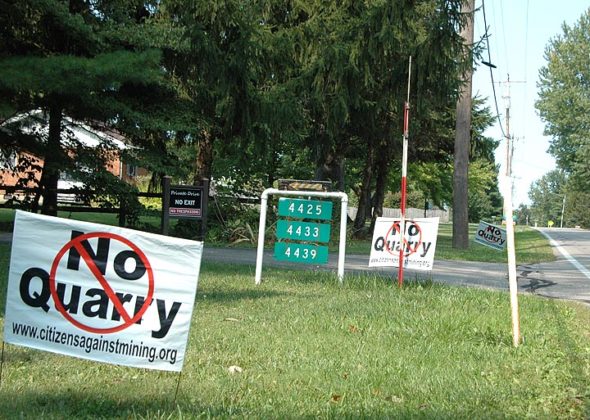 While Yellow Springs will not be immediately affected, some villagers are concerned and have joined in the fight.

Enon Sand and Gravel, whose parent company is based in Cincinnati, applied to the state last fall and winter to combine and modify its mining permits in Mad River Township. On July 13, the company’s permits were approved by the Ohio Department of Natural Resources, or ODNR.

Under the mining plan filed by Enon Sand and Gravel, or ES&G, with the state, the company intends to mine for limestone in two phases on sites west of South Tecumseh Road and south and north of Fairfield Pike. ES&G’s recently approved permits cover a total of 420 acres in Mad River Township, an area that includes about 250 homes, as well as farms and small businesses, and is located near Greenon High School.

No mining has begun yet, however. Clark County officials notified ES&G this spring that the company is required to get a conditional use permit from the county board of zoning appeals, or BZA, before starting work. The company denies it needs county approval. On the same day its mining permits were approved by the state, ES&G sued Clark County Commissioners and the county’s zoning administrator in federal court, contending county permits aren’t required.

And in a separate action, a local citizens group, Citizens Against Mining, or CAM, last month appealed the state’s permitting decision. The appeal does not, so far, include a stay on mining operations.

Mad River Township resident Diana Pry, CAM’s founder and president, said there is widespread opposition to Enon Sand and Gravel’s mining expansion in the area. The group submitted a petition to the state this spring with 1,000 names of residents against the expansion; the petition has continued to circulate and now contains 1,500 names, according to Pry. Throughout the spring and summer, the group’s “No Quarry” yard signs have gradually appeared on more and more lawns in the area, including in Yellow Springs.

An Aug. 20 public meeting led by CAM packed the cafeteria of Greenon High School with about 150 people, and earlier meetings have drawn even larger crowds.

The Village of Yellow Springs and Tecumseh Land Trust both sent letters to the state this spring expressing concerns over the mining operation, two of about 10 area groups and officials to do so since the company’s mining plans became public last March.

“This is a concern for a lot of us,” Pry said. “We’ve gotten a lot of positive support.”

Small-scale sand, gravel and some limestone mining has been pursued in the area for decades, according to Kyle Peterson, a Mad River Township resident and CAM board member who has begun to review property records going back 100 years. But Enon Sand and Gravel’s planned mining operations are much bigger and stand to more profoundly impact the area, he believes.

“They’re going to blast and dig on 400-plus acres not previously used for mining,” Peterson said.

ES&G purchased the Mad River Township land from area resident Dan Demmy in 2015. The land sale included two mining permits, both dating back to 1977.  ES&G applied to the state to combine the two permits and significantly modify the mining plan for the resulting combined area of 420 acres. In July, the state approved the merging of permits and authorized the company’s plan to mine deeper than previously allowed, to increase “dewatering” and to add blasting operations to facilitate limestone mining on sites across the property.

Dewatering refers to the pumping of groundwater to lower the water table in order to access minerals below the surface. It is this activity that seems to be of gravest concern to many area residents.

Under the modified permits, Enon Sand and Gravel can mine to a depth of 141 feet, which may put some local wells in jeopardy, some area residents and officials believe. Mad River Township is not served by public water, so homeowners and farming operations rely on private wells. Pollution of those wells by mining activities and the possibility of wells running dry because of a substantially lowered water table near mining operations are both key concerns for people who live in the area, according to Peterson.

One young farmer at the Aug. 20 CAM meeting, Paul Thibeault, said he was deeply concerned about water loss. He and his parents live on a small five-acre farm in Mad River Township where they keep horses.

“It’s a big issue for us. Our house and horse trough depend on the aquifer,” he said. Other area farmers have similar concerns, he added.

In a public presentation in March, ODNR and Enon officials acknowledged the potential for a reduction or loss of water wells and contamination of wells by bacteria. Ohio Revised Code outlines requirements for investigations and replacement of water wells connected to mining activities.

In a previous interview with the News, Enon Sand and Gravel CEO Dennis Garrison said the company would abide by state requirements.

The company’s planned pumping of ground water into the Mud Run and tributaries, which feed into the Mad River, part of the Great Miami River Watershed, is another deep concern for residents who believe the ecology of the area, including its waters and wildlife, could be jeopardized as a result.

Yellow Springs is part of a different watershed, the Little Miami River Watershed, and its wellfields, located south of the village, are not fed by the same aquifer.

Other concerns cited by CAM leaders and other residents at the Aug. 20 meeting include potential damage to home foundations as a result of blasting; the likelihood of lowered home values; and a range of effects such as noise, dust and increased truck traffic that could negatively impact quality of life in a peaceful area.

Prompted by these and other concerns, CAM filed an appeal with the Ohio Reclamation Commission, the appeals board for ODNR, on Aug. 7. CAM’s appeal seeks to overturn all three aspects of the state’s permitting decision: the merging of permit areas, the increase in mining depth and dewatering and the authorizing of blasting. According to Peterson, the group submitted an independent hydrogeology report, prepared by an area environmental consultant, that challenges ES&G’s groundwater model. The report asserts that impacts on area groundwater could be more severe than the ES&G model predicts, Peterson said.

Enon Sand and Gravel and ODNR are both parties to the appeal. The hearing for the appeal could take place as early as January 2018, according to Hearing Officer Linda Osterman.

Over the past 10 years, four such appeals were filed by citizen groups, Osterman said by email Monday. One was dismissed and three were withdrawn by the citizen groups. The commission also hears appeals by individual citizens, and “does find in favor of citizens in some cases,” she wrote.

Decisions by the Ohio Reclamation Commission are appealable to the local court of common pleas or the Franklin County Court of Common Pleas, according to Osterman.

CAM is also seeking other avenues to oppose ES&G’s planned mining expansion. According to Peterson, the group’s environmental committee is looking into two sections of the federal Clean Water Act, both of which involve wetlands protections, one carried out by the Army Corps of Engineers and one by the Ohio EPA. Peterson believes wetlands are a feature of the ES&G mining area and require protection under federal law. The committee is also compiling sightings of four endangered species in the area in hopes of spurring a state study to initiate tighter protections.

“We want to ensure the state agencies are implementing all the relevant regulations and conditions,” Peterson said.

Meanwhile, Clark County is fighting the lawsuit brought by Enon Sand and Gravel in July. No hearing has been scheduled for the case, docketed in southern Ohio’s U.S. district court. Only a portion of the total mining area is identified in the lawsuit, according to a summary provided by CAM.

But Clark County Commissioner Rick Lohnes sees the situation differently. The company needs to apply to the county to expand its mining operations because it is planning to mine in areas that haven’t been mined in the past and whose character has changed significantly since the state permits were issued in 1977, he said. Specifically, township land has seen the construction of many more homes on what was once “a wide-open nothing,” according to Lohnes.

“The whole situation has changed,” Lohnes said. The commissioner has been outspoken in his opposition to the mining expansion since it was announced in March.

According to Ohio Revised Code, state mining permits do not exempt a mining company from seeking other applicable permits or resolving local zoning issues. In an email Monday, ODNR spokesperson Eric Heis said the agency is not responsible for enforcing local zoning laws.

CAM’s Diana Pry said her group was lining up expert witnesses to address issues of dewatering and other mining impacts before the Clark County BZA, if and when a hearing is scheduled. Expert witness fees for testimony can be in the thousands of dollars, so CAM is fundraising to cover these and other costs. Pry declined to disclose the amount the group has raised since it formed in March.

Peterson said he felt “pretty positive” about the group’s chances of curtailing the mining expansion. “We’re looking into every aspect we can possibly pursue,” he said.

But to the 150 residents who gathered Aug. 20 to hear how mining might affect them, he had a blunt message.

“This is your community and you’re going to have to fight for it,” Peterson said.