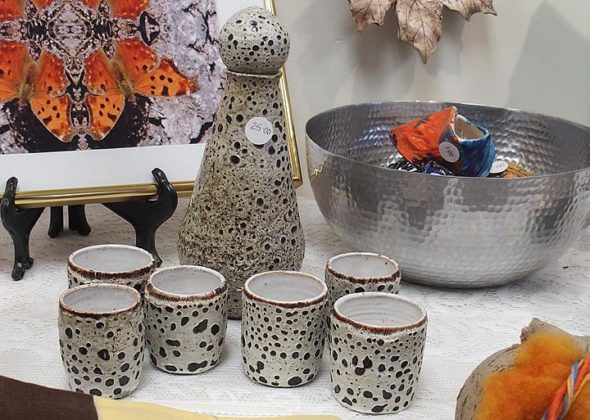 A hand-crafted sake set is one of the many items on display — and for sale — at the annual Holiday Art Jumble, presented by the Yellow Springs Arts Council at the group’s gallery through Dec. 31. The Jumble serves as the Arts Council’s final show of the calendar year as well as its biggest fundraiser. (Submitted photo)

An artful jumble of surprises awaits

“Welcome to the Holiday Art Jumble,” she began. “There are three things here that you’re going to want to buy. I don’t know what they are, but you’ll know before you leave.”

One of 16 volunteers serving as gallery hosts during the run of the 2017 Art Jumble, Harrison speaks from experience.

Invariably, her prediction plays out, as visitors peruse the gallery space filled with art works, artsy curios and hand-crafted items they didn’t know they wanted until seeing them — and their mostly modest price-tags.

Introduced in 2012, the Holiday Art Jumble serves as both the Arts Council’s final show of the calendar year and its largest fundraiser.

Items on display, and for sale, include framed and unframed drawings, prints and photographs as well as paintings, ceramics, glasswork, needlework, jewelry, objects d’art and decorative seasonal goods.

Gallery coordinator Nancy Mellon likes to call it “the grand reshuffling of Yellow Springs art,” as the collection is created through the donations of local artists and Arts Council supporters who often end up taking home a newly acquired piece.

“I just love being a part of it,” she said this week. “I enjoy seeing elements from the past that have been precious to people.”

Dillon-Bloch said she feels especially gratified when Jumble visitors are excited about something she has donated — such as a glass-enclosed butterfly, which was originally acquired by her older sister while traveling overseas more than 40 years ago and perfectly met the needs of a woman who was redecorating a room for a nature-loving friend.

Her own recent acquisitions have included a tiny enamel teacup and a puppet created by locally based puppeteer Jim Rose.

Dillon-Bloch said that while she happily supports the annual Holiday Jumble on its own merits, she also is glad to participate in an effort that strengthens the mission of YS Arts Council.

“It’s a great organization,” she said. “I appreciate the artists they bring in and the shows [they mount]. They’ve been a source, in recent difficult times, of joy, laughter and humor.”

Gallery Coordinator Mellon said the arts group is grateful to Dillon-Bloch and other community members who part with their treasures for the sake of the organization.

“They’re given with such generosity and with such joy,” Mellon said.

The Arts Council put out a call for 2017 Holiday Jumble donations early in October, and the response has been terrific, Mellon sad.

“This year has been so abundant, it’s been kind of awe-inspiring,” she said. “It’s always been wonderful, but this year it’s never stopped. There’s always more stuff. It’s just incredible.”

As pieces are sold, the gallery space is restocked with new items. Mellon said she has been restocking and rearranging every day since the show opened before Thanksgiving. It runs through Dec. 31.

And the sales this year are topping past shows, she added.

“I think we’re up to almost a little under $3,000 so far,” which is the most ever raised in total, Mellon said.

She credited modest prices for the brisk sales. Most items are less than $10, and many less than $5. The high end is about $40, with a couple of singular items priced higher. A 51˝ by 31˝ wall tapestry depicting a scene by the painter Fragonard, for example, was listed at $65, while a Victorian-era carved-cameo brooch with diamond insets, appraised at $1,000, was going for $800.

But such are the exceptions.

Villager Barbara Mann, who like Harrison is volunteering as a gallery host, said that visitors had been making “piles” of purchases during her watch.

“There certainly is an eclectic mix of stuff in here,” Mann said. “It’s sort of like everybody’s attic in one place.”

Mellon said the Jumble holds a special place in her heart.  “It has a neat spirit. To me it’s a gift … and a gift to the Art Council.”

The Yellow Springs Arts Council Gallery, at 111 Corry Street, is typically open 1–4 p.m. Wednesdays–Sundays. The 2017 Holiday Art Jumble, which runs through Sunday, Dec. 31, will have extended hours Saturday and Sunday, Dec. 16 and 17, and Saturday, Dec. 23, from 11 a.m.–5 p.m. The gallery will be closed Sunday, Dec. 24. Donations for the sale will continue to be accepted through Wednesday, Dec. 20, during open gallery hours. Call Mellon at 767-1366 with questions about suitability.