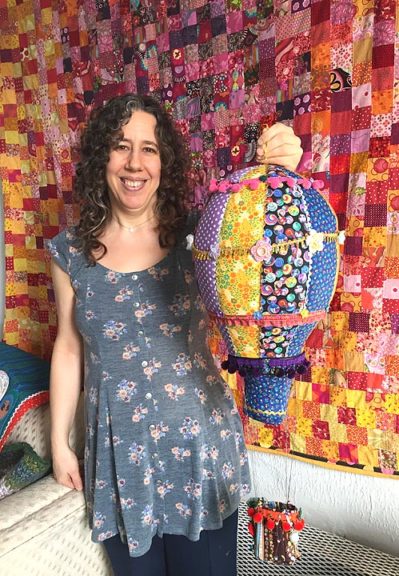 At Springfield Museum of Art — Colorful caravans, carousels in show

“Marvelous Journeys,” an exhibition of the work of Yellow Springs artist Sharri Paula Phillips, opens April 22 and runs through Sept. 9 in the Chakeres Gallery in the Springfield Museum of Art.

In the show, caravans, hot air balloons, carousels, tree houses, and quilts pulse with saturated color and a range of textures from shimmering satins to plush velvet. According to the artist, the imagery is meant to convey a sense of movement from place to place and travel. While some of the work in the show dates back 15 years, much of it was made just in the last few months.

The work immediately connects with viewers who are often whisked back to the magic and mystery of their own past.

“There is a clear-eyed, sweetness to Sharri’s work, which I believe stems from the artist herself,” said Nancy Mellon, gallery coordinator for the YS Arts Council. “Her work often focuses on childhood worlds — which can be dark and scary but also heroic and wildly fun to be in.”

Phillips’ work is also unique in its layering of objects into her textile medium, according to artist Corrine Bayrakaroglu: “In other words, her work pulls a viewer in.”

Artist Eve Fleck, the director of marketing and communication at the museum in Springfield, is an admirer as well, and was instrumental in bringing Phillips’ work there.

“Sharri’s creativity and use of interesting materials, both found and created, fill me with a sense of awe and excitement,” Fleck said. “Her pieces create imaginative worlds that draw me in over and over again, and I discover a clever and fun new element each and every time I view a piece. They are indeed ‘marvelous journeys’ filled with joyous adventures.”

Phillips, who is originally from Philadelphia, says that she has unfailingly found joy in art.

“I was always doing art, drawing, and using crayons through high school, but it wasn’t until college that my interest in art exploded,” she said.

Phillips graduated with a bachelor’s in art from Antioch College in 1995, and has been making art ever since.

“Since it is a small school, the teachers gave us a lot of attention, and the environment felt right to explore different kinds of art,” she said. Her professors also allowed Phillips to explore, including learning to quilt from local fiber artists such as Gerry Fogarty.

Phillips has been largely influenced by outsider artists such as Howard Finster, an American artist and former Baptist minister, whose work included paintings and sculptures, quilts, and a piece called Paradise Garden, a sculpture garden with over 46,000 pieces of art. He also produced album covers for the Talking Heads and R.E.M. As a teenager, Phillips was attracted to his singular and often bizarre images of angels, aliens, and historical figures such as George Washington and Elvis Presley.

Phillips was also fond of the colorful and cheerful work of illustrator and author Mary Engelbreit, who has produced a prodigious number of books, calendars, and stationery products. As in Finster’s work, the figures are flat, simply drawn, and the fabric detailing is highly patterned.

A copious reader, Phillips is also inspired by fantasy and fiction writers such as J.K. Rowling and Terry Pratchett. Harry Potter’s world is of special interest.

“With Harry Potter, there is a world of magic that is parallel to the real world that is fascinating and appealing to me,” she said. Phillips visited the Wizarding World of Harry Potter at Universal Studios in Orlando in January of this year.

As a child, Phillips connected with Cooper Eden’s illustrated book “If You’re Afraid of the Dark, Remember the Night Rainbow.” The lushly illustrated story, set in a magical world, deals with fear, doubt and loss, and has a message about “facing obstacles with a positive attitude and a willingness to put aside logic,” according to its publisher, Chronicle Books. This was a timely message for Phillips, who lost her mother at 13 and had rough times in high school. She has powered through tough periods by building rich art worlds, which have a story-telling or narrative theme.

“I have been fascinated with carousels since being a kid, and I never lost that fascination with them,” she said. “They are so detailed and intricate, so I make little versions of them. A Gypsy caravan is another favorite of mine. One of my fantasies is to travel in a little caravan with all my art things and create works of art.”

Although it is stationary, she loves working in her spacious sunny studio over Ohio Silver, where she makes her creative dreams come alive.

“I use lots of different materials, fabric quilts, embellishments, beads, little found objects, lots of miniatures, animals, figures, charms, baubles, anything I can find from craft stores, gifts from friends, and things I have collected over my whole life,” she said.

Phillips, who feels very supported by the community, is extremely happy in her work. Although shy by nature, she enjoys connecting with people through her art. “Doing art always seems magical, and I feel very blessed to be able to do it and share it with people,” she said.