YS principal to remain on leave

Tim Krier, the principal of McKinney Middle School and Yellow Springs High School, will remain on medical leave through the end of the school year, according to a letter district Superintendent Mario Basora sent in an email to school families Thursday, May 3.

Krier has been absent from the middle/high school since March 8. A letter from his medical practitioner dated March 14 recommended he be placed on medical leave for six weeks, when his condition would be re-evaluated. The school board unanimously accepted the letter at its regularly scheduled meeting Thursday, April 12. At the same meeting, the board also approved the appointments of Assistant Principal Jack Hatert as interim principal, effective March 8, and district counselor and retired high school Principal John Gudgel as interim assistant principal, effective March 16.

A more recent letter from Krier’s medical practitioner, dated April 25, said that Krier had been “again evaluated today [April 25] with regard to his ongoing medical condition.”

According to the letter, obtained by the Yellow Springs News through a public records request, “He [Krier] is making progress, but still is unable to perform the essential functions of his job at this time.”

A followup appointment is scheduled June 6, 2018, “to re-evaluate his ability to return to work,” the letter states.

According to district policy, employees are allowed 15 paid sick days as well as up to 12 weeks of unpaid family leave, which can be applied also to personal illness. Accrued paid vacation and personal days may also be applied to medical leave.

The principal’s extended absence began the day after a report was filed with Yellow Springs Police alleging sexual misconduct involving students who attend the high school. Police Chief Brian Carlson has since said that Krier is not under investigation or accused of any sexual crimes.

Police records show that the March 7 report was the second time this year in which they were contacted about allegations of sexual misconduct by one or more high school students.

Basora’s May 3 letter addressed Krier’s leave as well as the ongoing investigation into the allegations of student sexual misconduct.

The text of the letter is below. 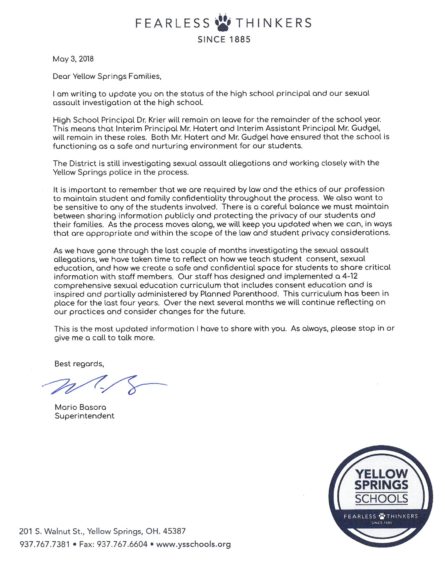