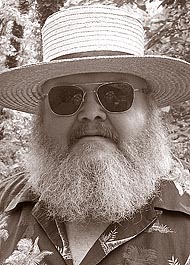 Neil was born on Dec. 12, 1952, in Dayton, Ohio, to Robert Neil and Betty Jean Elam Dawson. He was welcomed by his older sister, Deborah Ann. The family lived in Springfield during Neil’s young years and both he and Debbie attended Springfield schools. He did so well in school in his early years that he was given a test to determine if he qualified for advanced classes. Neil did so well that he proudly rushed home to tell his mother the news, but his mother told him that he must have cheated. It was the beginning of the rebel in Neil. His parents were very devout Baptists and Neil was exposed to church activities whenever the church door was open. He eventually grew restless in the church and began asking such thorny questions that his Sunday School teacher felt she had to send him to the Sunday School superintendent for correction. That didn’t work.

The Dawsons moved to the Greenon school district when Neil was in eighth grade and he completed his education there, graduating in 1971 with his lifelong friends, Garry Beair, Darrell Jordan and John Roberds. Neil enjoyed questioning authority which often meant that he and his desk were out in the hall during classes. He had good friends including the Ark family. His peers called him by the nickname “Pugsley” since he seemed to resemble that character in “The Addams Family” show. The nickname stuck.

After graduation, Neil and his parents moved to Cincinnati where Neil held a variety of jobs in industry before he completed an associate degree at Southern Ohio College in business administration and accounting. He eventually secured what he called the best job he ever had at GE Aircraft Engine as a quality auditor. He got to work in a team that provided quality auditing of jet engines, reverse engineering of a captured enemy fighter, and evaluation of GE jet engines from crashes. He loved it and the metrology which he studied and practiced. In Cincinnati, he had a wide range of friends who gave him the nickname “Woody.” With those friends, he lived fast and wild, ever the rebel.

Neil studied with a shaman from South Africa who lived in the Cincinnati area and he began to awaken spiritually while studying stones, crystals, minerals — the healing tools of that South African shaman. Neil also began attending metaphysical classes in Yellow Springs. He built an extensive collection of crystals that “spoke to him” and used them in learning to be a healer.

While in Cincinnati, he worked with his friend, Diane MacConnell, to provide help to the homeless folks in the Over The Rhine area. He and Diane planned and presented a music festival in Washington Park for those homeless people. In a 1991 article in the Cincinnati Enquirer about the concert that featured seven local bands and about the outreach to the homeless, Neil is quoted as saying, “I am not considered a great person on social service, but to be able to go into that area, reach out and give something to someone and see the appreciation, gives me a very positive feeling. They may not know it, but they are giving more to me than I am to them.”

Though he was one of the employees involved in a massive lay-off in the 1990s and he was sorely disappointed to lose the position at GE, the loss of the job gave Neil the opportunity to relocate to Yellow Springs, where he had always wanted to live, and to work for Sci-Tex in Kettering, which he considered a great company to work for until it was purchased by Kodak. He worked there until he was forced into retirement as Kodak reorganized the business. Again, he worked in quality auditing, measuring products and evaluating processes. He felt proud of his clean room and the many tools for measurement he tended carefully and used expertly. And he had the great benefit of being a resident in Yellow Springs community where he felt he belonged at last. In his youth, he knew about Yellow Springs but was discouraged by his family from visiting or becoming active in the “godless village” as his parents labeled it. In his heart, he knew this was where he belonged.

Once he was in Yellow Springs, his life took on the cadence and the spirit he had searched for. One of his favorite things was walking in the north Glen early in the morning on the weekends before anyone else was stirring. In the misty, early morning, the Pine Forest became his church.

Neil also found like-minded people interested in metaphysics and alternative healing modalities here. He became a Reiki master and provided healing sessions with the laying on of crystals for anyone who came to him for a session. He didn’t charge for his healing work since that insulted his sense of the sanctity of being a channel for healing.  Neil was ordained by the Sanctuary of the Beloved, Inc. of the State of New York so he could perform weddings. And he did. Each one was unique and, mostly, completely outside traditional norms. He loved being able to give people a less conventional choice.

Neil was very interested in the music of his day and was especially fond of hearing just the artist with their acoustic instrument. He knew the names of the members of bands, their hits and their misses. He especially enjoyed Neil Young and Crosby, Stills and Nash though his taste spanned a broad spectrum. For example, he looked forward to watching Lawrence Welk on Saturday evenings on PBS because it reminded him of good times in his childhood. One was especially lucky to get a mix tape from Neil back in the day because he had a natural talent for pulling together songs that were far more impactful together than apart. He filled his home with high quality sound and listened avidly. He also played both electric and acoustic guitar for himself and with his wife. In recent years, he would pull out a Martin and announce to Deann that it was rehearsal time for their imaginary band which he lovingly called the Phatt Phamily. They joked they would debut at the Tammy Lynn Inn in Deann’s home town, DeGraff. He cherished times when their dear friend, Lorna Hunt, would pick up the Martin or the Gibson and play just for and with him and Deann.

Neil always said maturity is over-rated. Endlessly 18, he pursued rebelling against what was expected of him by his parents, the church and anyone who tried to pigeon-hole his way of being. He was a watcher. Once he had a person figured out, Neil would either choose to be in a relationship or move on. One knew Neil cared for them if they were the object of his teasing. He was cautious around children since he didn’t really want to edit the things he said for the sake of young ears. He preferred young people after they reached adulthood and could sit down with him and have a shot and a beer.

Neil married for the first and only time late in life. He met Deann Ward in Yellow Springs while they studied Native American Spirituality with an Apache elder dear to them both, Sapokniona Whitefeather. In 2002, he and Deann married atop the Williamson Mound near Cedarville on the Summer Solstice in the presence of four special friends. They had 16 good years together in which Neil consistently surprised his wife with stories about his life-before-Deann that she had not heard. The man lived his life thoroughly, shook off expectations, tried a lot of unconventional things, gossiped like the best of them and kept an eye on those he loved.

Neil was preceded in death by his parents and his sister. He was especially heartsore with the passing of his sister last year, saying, “Now I am the only one left, I am alone in this world.”

Neil is survived by his wife, Deann Ward; his brother-in-law, Paul Hayes, of Pahrump, Nev.; and his nieces, Kim Hayes Spurgeon, of Las Vegas, Nev.; and Kristal Hayes Schmandt, of Pickerington, Ohio. He is survived on his mother’s side of the family by his aunt, Rosemary ElamNock, of Jamestown, Ohio; his uncle, Lowell Elam, of Dayton, Ohio; and their extended families. He is survived on his father’s side of the family by cousins Marcia Lewis, of Hawaii; Jennifer Brandon and Jana Helm, both of Colorado. He is also survived by his father’s second wife, Norma Dawson, a woman for whom Neil was especially grateful because she gave such loving care to Neil’s father, Bob, in his last years.

Neil considered himself a recovering Baptist who rejected his parents’ religious beliefs and practices completely.  He had learned that the woods were his church rather than any organized religion. His spirit was plugged into higher frequencies and he needed to live on his own terms. It troubled his family that Neil did not conform to their expectations. It thrilled Neil to do so. He needed to do so.

Neil did not want a traditional visitation or a funeral. He wanted to take advantage of the natural burial available here in Yellow Springs at Glen Forest. He wanted his chosen family, the many friends he had made over the years, to come together and celebrate his life and that will be held in the future. Those who wish to remember Neil are invited to make memorial donations to the Glen Helen Association in his name at community.antiochcollege.edu/pages/giving/glen-helen. By doing so, donors continue the support and preservation of the most highly treasured “church” that Neil loved.