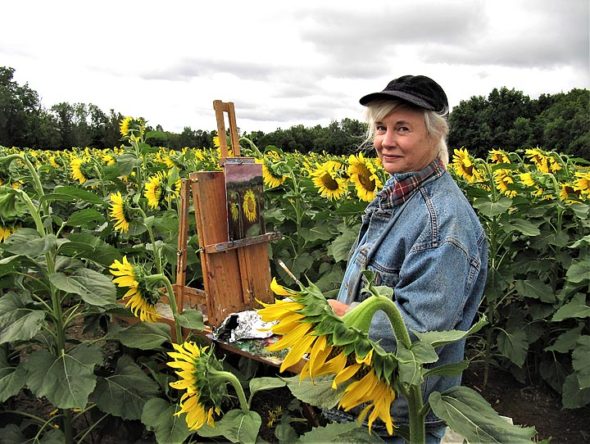 Imagine standing in front of a pond. The sun throws patterns of shadow on green lily pads drifting leisurely along as cattails bend to greet them. The scene is so calm and still, it takes a moment to realize the lily pads are moving. The pond is flowing gently beneath them, its water sometimes rippling white where it’s touched by the sunlight. How often does someone neglect to notice the natural world, or notice it without taking the time to appreciate it?

Anyone who hasn’t dedicated time to noticing nature now has a chance to change that. Local artist Christine Klinger, who often takes her inspiration from nature, has two art exhibits showing in Yellow Springs.

“Abstracts Old and New” is showing at the Emporium, 233 Xenia Ave., from Aug. 11 to Oct. 7, and “Into the Garden: New Art by Christine Klinger” is showing at the Yellow Springs Arts Council Gallery, 111 Corry Street, from Aug. 17 to Sept. 16. The scene described above is from Klinger’s “Pond 2,” which can be seen in the latter.

An opening reception for Klinger’s Arts Council show will be Friday, Aug. 17, from 6 to 9 p.m. at the gallery.

Klinger works in many media and genres; she is a photographer, as well as a painter and a sculptor. Though she is working in many media for the pieces in the Arts Council exhibit, “Pond 2” is an oil painting done on yupo. Yupo is a recyclable, synthetic, tree-free substrate made of polypropylene. Reflecting on the choice of media, Klinger observed it may not have been a choice at all.

“I didn’t consciously choose the media [for this exhibit],” she said. “They chose me.”
A professional artist, Klinger lived in Yellow Springs in the 1970s, and she moved back in 2006. She has been a member of the Village Artisans Cooperative Gallery since 2015.

‘Calm Day’
Once a piece of art has chosen her, Klinger welcomes any new experiences it offers for her. Her process for creating “Calm Day,” the largest painting in the Arts Council exhibit, shows her willingness to do whatever is necessary for a piece. Because it is so large — 32 by 48 inches — the painting was tricky to move around while she was working on it. Of all the pieces in the exhibit, she said, it was the most challenging and the most rewarding to make.

Klinger uses whatever references inspire her, but she paints outside when she can so she can better see the color and light; she sometimes paints from photographs she has made. For “Calm Day” she used mostly internal references and painted in the studio. Klinger said she welcomed “the drama, the challenge, and the practicality” that came from meeting the creative demands for this piece.

Expressing beauty
While pursuing her master’s in photojournalism from Ohio University, Klinger “sometimes felt torn between what [she] saw as photojournalism’s main goal ­— to communicate the story in a clear, objective and, if possible, creative way for readers who aren’t on the scene — and that of taking a more personal approach.” She loves photojournalism, but it is the opportunity to express her subjective interpretation of what a specific site means to her that influences how she approaches her creative work.

Klinger wants to share not just what she sees, but how she sees it. Lately, she said she is drawing her inspiration from nature, “in the many forms and meanings of the word.”
While painting, “I seem to want to express the beauty I see,” Klinger said.

Though Klinger sometimes explores darker themes in her photography, using painting to find the beauty in the world is healing, she said.

“I think that’s why I’ve been gravitating more toward the beauty in life and trying to tone down or obscure some of the darkness many of us are experiencing these days,” Klinger said.

Klinger’s aesthetic reflects her willingness to find the best way to clearly express how she feels about what she sees. She is influenced by both Impressionism and Expressionism. She does not limit herself to working in one style or media, because she wants to be open to whatever possibility best represents whatever is inspiring her.

In Klinger’s artist’s statement for the YSAC show, she wrote: “I revel in the spontaneity. Each piece begins as a spark or an idea — something that intrigues or surprises me, but can evolve into something else as I work. These concepts come from a place in my subconscious, a place of mystery.”

Klinger understands that a person’s reason for taking a piece home may be different than her reason for creating it. She appreciates that art reflects a subjective perspective, whether it is the creator’s or the viewer’s.

“The work goes through me, but when it goes on a wall or a pedestal it takes on a life of its own,” she said. “I believe that’s how it should be.”

To contact Christine Klinger and view the art she has available for purchase, visit klingerart.com.

*The author is a writer, performer and Antioch College alumna who lives in Huber Heights. She can be reached at Tworpp@aol.com. 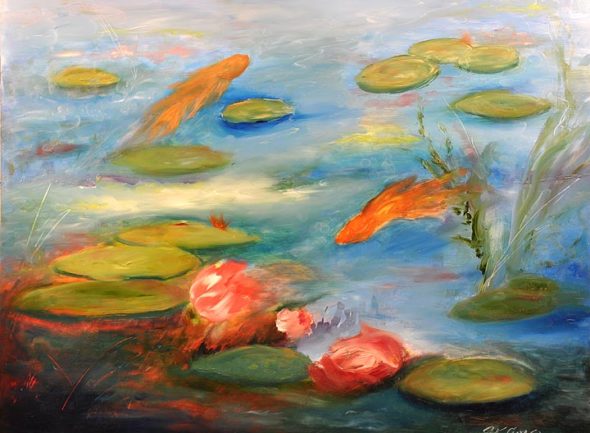