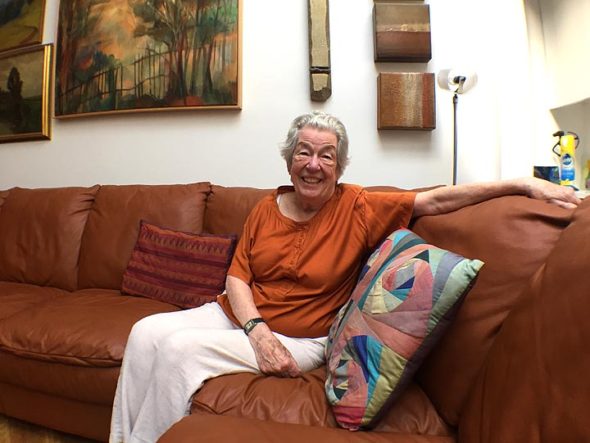 Jane Baker is being inducted into the Greene County Women’s Hall of Fame, with a reception for its 2018 honorees slated this month. She recently showed off some of the books she designed in her home office on Phillips Street. Baker is a local book publisher, editor and designer and has been a dedicated volunteer to many local nonprofit organizations, including Chamber Music in Yellow Springs, which she cofounded. (Photo by Carla Steiger)

A gentle smile played across the face of Jane Baker when she confessed to being surprised by her nomination for inclusion in the Greene County Women’s Hall of Fame.

“I was stunned, surprised and totally shocked. I would never have expected that,” she said in an interview this week.

Given the length and depth of her service to the community over the last five decades, the nomination shouldn’t have astonished Baker.

Baker is one of five county women being inducted into the Greene County Women’s Hall of Fame this month. An awards luncheon, open to the public, is Sept. 22 at the Walnut Grove Country Club, 5050 Linden Ave, Riverside, at 11:30 a.m. Reservations must be made by Sept. 14.

The other inductees in the 2018 class are Gloria Dillon and Paula Vaught of Xenia and Debborah Wallace and Mary Smith of Beavercreek.

The 84-year-old Baker has served the community faithfully since the late 1960s, when she chose the village as a place to live. Her care for the local community fueled her commitment to volunteerism, she said.

“It helps the community, which is very important to me,” Baker said.

Baker helped found Chamber Music in Yellow Springs in 1983, and has produced all of their printed programs and season brochures, in addition to serving on their selection committee. Baker also spent 20 years at the Yellow Springs Community Foundation — where she was a trustee for a decade — and produced its newsletter. Baker’s service to the Senior Center included the production of Ripples, its literary magazine, for the last four years.

Baker was born in The Hague, Netherlands, and spent the bulk of her childhood in New Jersey. She attended Wellesley College, where she majored in English. She came to the Dayton area with her then husband, and soon discovered Yellow Springs, which she said she warmed to because everyone seemed so friendly. She moved to town, picked up a master’s degree in history at Wright State University, where she also worked as a publication officer. She has worked in the publishing field continuously since 1969.

The Greene County Women’s Hall of Fame inductees and recognized individuals are selected on the basis of their contributions that have provided countywide, state, national or international impact, according to a press release. The categories include the arts, humanities, business, industry and health, among others.

The honor was established in 1981 to annually honor the women of Greene County, both living and deceased, who have contributed to the county’s growth and progress, according to a press release. Nominees must be a native of Greene County, or have lived here for at least ten years.

Sending nominations in support of Baker were nine people, including eight villagers. Bruce Bradtmiller, president of the board of the Yellow Springs Community Foundation, and his wife Carol Cottom, pulled the nominations together.

In her nomination letter, Emily Seibel of Home, Inc. credited Baker’s contribution of a one-quarter-acre parcel of land to the nonprofit as the “game-changer” that helped leverage $1 million in outside grants and loans that made the building of their first multi-family rental housing possible. In the letter, Seibel also praised Baker’s involvement as an advocate for senior housing and co-housing, noting that Baker had won Home Inc.’s Tony Bent Affordable Housing Award for her efforts in 2016.

“Jane has made and continues to make her community a better place to live. …  She is always willing to lend a hand,” Seibel wrote.

Muriel Keyes, the former managing editor of The Antioch Review who now lives in Portland, Ore., wrote in her letter that Baker always stepped up to any task that needed doing for the literary magazine.

“When she said she would undertake something, you knew that you could count on her to do so, do a terrific job, and complete the task on schedule, as promised,” Keyes said.

Patti Dallas vouched for Baker as a good friend, describing her as a quiet and unassuming person who is endlessly generous with others.

“I primarily know Jane for her warmth of heart,” Dallas wrote in her nomination letter.

Dallas also relayed an anecdote that Baker would often feed the performing musicians of Chamber Music in Yellow Springs and invite them to stay at her house. In her large kitchen, lined with cookbooks, she also hosted many community events over the years.

While Baker relishes the variety and richness of her many volunteer activities, she is still actively working as a production editor for The Antioch Review and serves as an editor and designer for several books for local authors. She completed several photography books for the late Irwin Inman, a series of five books about hats by Debbie Henderson, including, “Cowboys and Hatters: Bond Street, Sagebrush & the Silver Screen,” which was an outgrowth of Henderson’s doctoral dissertation and became the basis of an exhibit.

Baker is especially proud of the book “Photographs by Axel Bahnsen,” and “Celebrating Women: The Women’s Park of Yellow Springs” also holds a place of pride. She proudly displayed to this reporter her longest book to date, at 852 pages, “Diaries 1857–1917,” by Bishop Milton Wright, the father of Orville and Wilbur Wright.

In addition to running her own publishing company, Wild Goose Press, she has worked as an editor and book designer for Wright State University Press, the Yellow Springs Historical Society, the Humanist Society and Crown Equipment Corporation. The books she created for them, and many others that she has produced, line the shelves of her home office.

Reached for comment this week, Debbie Henderson, a longtime friend and former tenant of Baker’s, was effusive in her praise of Baker.

“She is so kind and helpful … I just think that she is an angel,” Henderson said.

Henderson, the costume designer for the Wittenberg University Department of Theatre and Dance, has worked on a series of books about hats with Baker and highly praised Baker’s work.

“It was her design skills that made my research visually engaging and accessible. … Her expertise in designing and relating words and pictures solved all problems,” she said.

In her home office on the corner of Phillips and West Davis Streets, Baker continues the work of a publisher, now using the latest computer technology. She has no plans to retire anytime soon.

“I like what I do, so I hope to keep doing it,” she said. “Besides, I like the commute. I just walk down the stairs in the morning, and I am at my office.”

*The author is a local artist and writer. She can be reached at: carlaannsteiger@gmail.com.