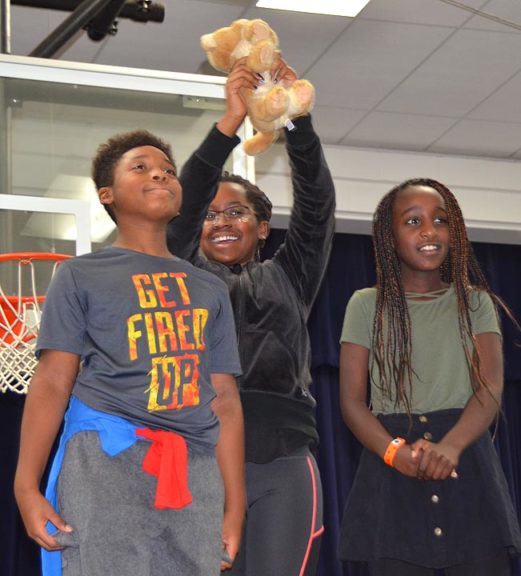 In rehearsal: The circle of life continues as the lion Simba, played by James White; the shaman Rafiki, played by Gini Meekin; and lioness Nalla, performed by Ru Robertson, celebrate the birth of a new generation at the conclusion of “Lion King KIDS,” which Mills Lawn School will present in two performances Thursday, Nov. 15, at 12:30 and 7 p.m, at Central State University’s Paul Robeson theater in Wilberforce. (Photo by Carol Simmons)

Mills Lawn Elementary has transformed into the Pride Lands this fall as students prepare for a production of “Lion King KIDS,” a stage adaptation for youth of the popular, animated Disney movie and subsequent Tony Award-winning Broadway musical.

In the story, the Pride Lands  is an African savannah where a pride of lions rules over the animal kingdom. Elephants, wildebeests, antelope, meerkats, zebra and giraffes are among the multitude of creatures that are connected in “a circle of life” that flows from birth to death to birth again.

“And it moves us all/Through despair and hope/ Through faith and love,” according to the song that opens the movie and stage production.

That song — which, like the rest of the show, features music by Elton John and lyrics by Tim Rice — also opens “Lion King KIDS,” and in Mills Lawn’s visioning comes to life in a colorful panoply of sights and sounds created by more than 150 children singing and dancing across the stage.

But even before that takes place, the school’s first-graders, 37 all told, will perform a Nigerian welcome song and dance, titled “Fanga Alafia,” for the audience.

Within the show, the quest of the young lead character, lion cub Simba, shows the vastness of the African continent, as he travels from the Pride Lands across the desert to the jungle, Reichert said.

Simba’s jouney is both physical and emotional as he grows into the leader he was  born to be. The role is played by two students, Noah Diamond as young Simba, and James White as his older incarnation.

After a rehearsal in the Mills Lawn gym earlier this week, James said he is excited about how the show is coming together. And like Simba, he said he has learned more about himself through the course of the play.

“I love acting,” he said enthusiastically, in answer to a question about the best lesson he’s learned from his work in the play.

Director Reichert said that one benefit of the school musical is the chance to let students shine in talents and skills that don’t necessarily have a place in the regular school day. Thus the production includes not only singing and dancing, but also gymnastics and tumbling with space for cartwheels and flips. Students with a penchant for making things can help with sets and costumes, while instrumentalists form a 10-person rhythm ensemble.

Mills Lawn Principal Matt Housh said this week that the musical helps bring the entire student body together in a venture that bonds them and teaches lessons that are important in life, including perserverance, discipline and teamwork.

Several students said their roles in the play have pushed them to grow in new ways.

Sixth-grader Aiden Scavone, who plays the villain Scar, said the show has improved his singing, but also helped him to “listen better.”

Olivia Hasek, who plays Simba’s mother, Sarabi, said that she is normally a quiet person, and acting in the production has helped her step out of herself and “speak louder.”

At the same time, she has loved being a part of the show, she said.

“The highlight of my days is coming to practice,” Olivia added.

Director Reichert said she has observed growth among the participants.

“It’s wonderful to watch kids step out of their shell in different ways,” Reichert said.

The all-school musical is a Mills Lawn tradition that dates back to 1998 and a production of “Joseph and the Amazing Technicolor Dreamcoat.

Since then, the school has mounted a new production every two to three years, sticking to a three-year schedule for the past decade. The last show, “Seussical Jr.,” was mounted in 2015. Reichert, who produced that show as well as the one before in 2012, said that about 160 students turned out at the beginning of the school year to audition for a featured part in “Lion King KIDS.”

While the lead characters are filled through the audition process, everyone who wants a role gets one, Reichert said. In addition to the mass chorus, parts include groupings of wildebeests, large animal puppeteers, lionesses, hyenas, tricksters/tumblers, jungle/gymnasts, star dancers, villagers, drummers and tech crew. About 200 students will be performing or working with the stage crew Nov. 15.

Assisting with the production are Miller Fellow Nadia Mulhall, overseeing sets and large puppets, and parent Liz Robertson, in charge of costumes.

“Everything’s going to be pretty and fun to look at,” Reichert said.

“Lion King KIDS” will be presented Thursday, Nov. 15, with performances at 12:30 and 7 p.m. at the Paul Robeson Cultural and Performing Arts Center on the campus of Central State University in Wilberforce. Tickets are $4 and will open to the public, according to remaining availability, on Monday, Nov. 12, with sales at the Mills Lawn office from 7:45–8:30 a.m. and 2:30–3:14 p.m. each day until they are gone. Fore more information, call the school at 937-767-7217.