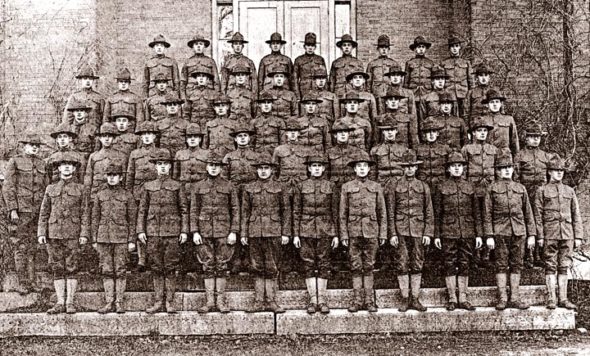 This 1918 photo shows some of the Antioch College students who joined the Student’s Army Training Corps, a federal program in which male college students were given military training while taking college courses. To be part of the national World War I program, the college had to turn a dormitory into a military barracks. Fifty-four students took part in the training, which included marching around campus in formation. (photo courtesy of Scott Sanders, Antiochiana, Antioch College)

The Great War that transformed the village

On Feb. 14, 1919, the Yellow Springs News published a long list on its front page, spanning the entire length of the paper. It was the “Roll of Honor,” a list of all villagers who had served, or were serving, in the Army during the First World War, which had recently ended. The list included the sons and husbands of well-known village families past and current: Warren Cordell, Lowell Fess, Albert Lawson, Fred Funderburg, Robert Benning, Albert Carr, Paul Pitstick and George DeWine, among others.

The list included 88 names, a large number for a village of, at the time, about 1,300 residents. That number reflects the significant effect of the First World War, known at the time as the Great War, on American communities, according to Antioch College historian Scott Sanders.

“It was, in effect, removing a generation of young men from town,” Sanders said in an interview last week.

Yellow Springs was a very different place in 1919, according to Dave Neuhardt of the Yellow Springs Historical Society. It was a sleepy farm town whose main event until the war was the Farmers Institute, a training session for farmers held each winter in the Opera House, which served as the village center. But that sleepiness changed when this country entered the war, and in Yellow Springs, as in almost every American town, villagers threw themselves into supporting the effort.

In honor of the 100th anniversary of Armistice Day — marking the end of World War I — the Yellow Springs Historical Society will present “Over There: Yellow Springs and the War to End all Wars,” a talk by Neuhardt, at 2 p.m. on Veteran’s Day, Sunday, Nov. 11, at the Yellow Springs Senior Center great room.

The upcoming centenary of the war’s end sparked his interest in the topic, Neuhardt said this week, along with the realization that he, like many villagers, knew little about this period of our collective past.

“What was amazing to me was realizing that some of these guys who went to war lived until the 1970s, not that long ago,” Neuhardt said. “But now they’re gone, and the people who knew them are dying as well. It’s a whole part of our history that’s disappearing fast.”

To prepare for his talk, Neuhardt spent hours at the Greene County library reading copies of the Yellow Springs News from 1916 through the end of the war. Most of Europe was engulfed in the war in 1914 when the Allies — Russia, Great Britain, France and Japan — and the Central Powers, which were Germany, Austria-Hungary and the Ottoman Empire, launched the conflict. While the war was sparked by the assassination of an Austro-Hungarian archduke, it was the culmination of an arms race and increasing tensions between the countries, according to “Ohio: A History of the Buckeye State,” by Kevin Kern and Gregory Wilson.

People in Yellow Springs seemed unconcerned with the war until the United States entered the conflict, according to Neuhardt, who said he found little reference to the war in the paper until 1917. The U.S. entered World War I in that year after Americans had been repeatedly angered by the sinking of American ships, especially the Lusitania, when 124 Americans died.

When this country entered the war, national leaders “initiated a massive propaganda campaign” to encourage support, according to the Kern/Wilson book. Posters, pamphlets and ads were heavily used to urge people to do their patriotic duty, and 75,000 “Four-Minute Men” were sent around the country to give “short standardized speeches” to the public urging support for the war.

In Yellow Springs, Antioch College President Simeon Fess, who was also a U.S. senator, urged villagers to do their part in a speech he gave at the Opera House, according to Neuhardt.

Villagers did do their part. That support included pressure from the Yellow Springs News, which published a front-page list of all local young men eligible for the draft, according to Neuhardt. As the later News list showed, the draft cut a huge swath through the village, the first time the federal government had used the mandatory program so extensively. According to the Kern/Wilson book, in all about 225,000 draftees, National Guard troops and volunteers from Ohio served in the war and 6,500 of them were killed. In Yellow Springs, two soldiers are listed as having been killed in the war, Edgar Van Kirk and Clarence Smedley, and about five were wounded in action.

Local women, too, mobilized. According to Neuhardt, village women organized a local Red Cross branch in town, and gathered regularly to roll bandages and send blankets to soldiers at the front. And local school board leaders also weighed in, pledging that Yellow Springs schools would no longer teach German — similar actions occurred across the country. The renaming of German food was also popular, with sauerkraut then called “victory cabbage,” according to Sanders.

Surprisingly, according to Neuhardt, there was little evidence in the local newspaper of any local protest against the war. What protest he found in the paper came not from those who opposed the war, but from those who thought this country had aligned with the wrong side.

The most prominent of the protestors was John Bryan, a wealthy farmer who farmed the land now known as John Bryan Park. Bryan, who donated to the village the land for a new high school — now the Bryan Center — was of German heritage and thought that the United States should support the Central Powers rather than the Allies. Although his wealth gave Bryan prestige, he was also known as an eccentric and had a “love/hate relationship with the village,” Neuhardt said.

“It was not a popular position,” Neuhardt said of Bryan’s argument.

While the current-day Antioch College could be expected to mount considerable protest to this country’s involvement in a foreign war, the leaders of 1917 Antioch College did not protest. On the contrary, college leaders aligned with St. Mary’s College of Dayton to launch an Antioch unit of the Student’s Army Training Corps, or SATC, a federal effort to give male students military training while still in college. While the effort did not last long, as the war ended about a month after the training began, during that month the college transformed a dormitory into a military barrack at the cost of $975, according to a 1918 memo from acting Antioch College President George Black, and soon 54 Antioch College students were marching around campus in their daily training exercises.

“It was a great occasion for the boys to stand there beneath the flag and, like thousands of other American sons at the same hour, to pledge their all in all to the common cause,” wrote SATC member Elmer Barr in a 1918 issue of the Antiochian, of the SATC members taking the oath of allegiance to the flag.

According to local historian Phyllis Jackson, there’s not much known about the experience of local soldiers during World War I because those who served in the war didn’t talk about it. Her own father, Albert Lawson, was stationed in France, but he remained mum when he came home.

“Just like World War II vets, they were quiet for about a 40-year period, then began talking about it,” she said, noting that some former soldiers told their stories when they became much older. However, her own father died relatively young, so she never heard his stories.

A relatively large number of local soldiers were African American, according to Neuhardt, although they were not treated well by the Army, and given mainly menial jobs. But France treated African Americans much more fairly, and American black soldiers stationed in France, such as Lawson, had a better experience than those stationed in Great Britain.

Some local African-American soldiers came back from the war to take on responsible positions in the local community, Jackson said. Herman Hunter, listed in the Yellow Springs News as an Army medic, went on to attend medical school and later practiced as a physician. And William Perry became the first local African American to serve on the Yellow Springs school board.

Perhaps the best known local participant in the Great War wasn’t a soldier at all, but a nurse. Alice Carr, who grew up in Yellow Springs, then received nursing training at Johns Hopkins University, was a member of the first unit of American Red Cross nurses sent to the front in 1917.

“She was intrepid,” said Carr’s great-niece Corrine Pelzl in an interview this week. According to Pelzl, a family story describes Carr as working on the front in a tent hospital at which an unexploded artillery round had landed and stuck in the floor of the main hall.

“They just walked around it,” she said of her aunt and other nursing staff. “They were too busy.”

Carr, whose papers are located at the Wright State University library, went on to a distinguished public health career with the Near East Foundation, and she was later honored by the Greek government for her public health work in that country.

For more information on the Nov. 11 talk, go to http://www.yshistory.org. The event is free and open to the public.