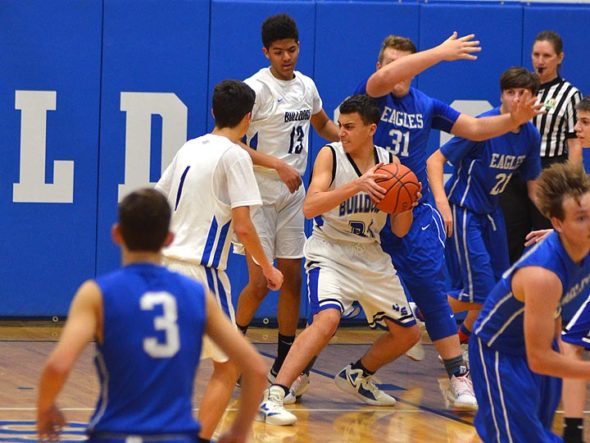 Both seventh- and eighth-grade Bulldogs experienced losses on Dec. 6 and 8.

On Dec. 8, both teams played non-conference games at Bethel Middle School and again suffered losses, with seventh-grade 10–42 and eighth-grade 22–32.

The girls basketball team won their Dec. 6 home game against Middletown Christian with a score of 43–35. Angie Smith led the charge with 21 points, 11 steals and eight rebounds; Annlyn Foster put in a great effort, with seven points and 14 rebounds.

“This is a young team that plays hard and always gives me effort,” said Coach Tim Minnich. “They want to get better every day, and we are building for the future.”

The team’s record is currently 3–3, and 1–1 in the conference. — Coach Nick Minnich

The YSHS Boys JV team started strong in their home opener against Middletown Christian on Friday, Dec. 7, scoring a quick six unanswered points, four from junior Kaden Bryan and the first two of sophomore Sam Lewis’ five points. But the Bulldogs’ shooting success cooled as Middletown Christian put the defensive pressure on in the second and third quarters. Joseph Minde-Berman fired up the team in the second half by scoring three field goals and a free throw, but the rally came a little too late as the Bulldogs fell to the Eagles, 41–22. Sophomore Ibrahim Chappelle and senior Mateus Cussioli added four points and two points, respectively.

The Bulldog boys varsity team played a thriller from start to finish Friday with a 57–44 win over the Eagles. From Anderson’s opening three pointer to Clark’s dominant 31 points scored, the Bulldogs led the entire game right up until the clock ran out. Clark would finish with nine rebounds, six assists and three steals, and Anderson contributed 15 points, six rebounds and two assists. The Bulldogs were especially adept at rebounding — Wagner had seven, Wallace had five, senior Teymour Fultz had four, and Bryan had two. Wagner added two three-point shots and a steal to the team’s effort, while Wallace made three out of four foul shots and snagged two steals. — YS News staff

On Friday, Dec. 7, the YSHS Bulldogs swim team had their first swim meet facing off against eight other familiar foes, including Xenia, Fairborn, Beavercreek, Oakwood and Dayton Carroll. Despite being the smallest team in attendance, the girls placed fourth and the boys fifth overall.

Lifetime best swims were had by the rest of the team, which included Devyn Deal, Jude Meekin, Avery Reeder, Sara Zendlovitz, Harper Mesure and Tariq Muhammad.

The Bulldogs swim team will be back in action on Saturday, Dec. 15, at the Piqua YMCA. The meet begins around 4:45 p.m. —Coach Brad Martin