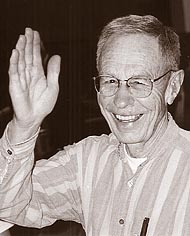 Al Denman died Wednesday morning, Jan. 16, 2019. He was 91. He served as college pastor and professor of philosophy of law and religion at Antioch College beginning in 1965.

Born in Idaho Falls, Idaho, in 1927, Al graduated from Idaho Falls High School in 1945. He went on to earn a B.S. in psychology from the University of Idaho, as well as an LLB from the law school. In 1952, he married Donna Drennen, of Idaho Falls. They moved to Boston, where he was a student at Boston University School of Theology and she at BU College of Liberal Arts.

Al interrupted his studies to return to Idaho Falls, where his mother was seriously ill. During this time, he served as a supply minister to two small churches in Idaho and practiced law with his father. Upon returning to BU, he focused on preparing for a college ministry, graduating in 1956. For the next four years, he was chaplain and professor of religion at the College of Idaho in Caldwell, and served as chair of a ministry program serving migrant workers in the area.

Beginning in 1960, Al was the recipient of several scholarships that enabled him to study social ethics at Boston University, Harvard Divinity School and Harvard Law School. He also spent time in Germany, attending lectures in jurisprudence at Frankfurt and Freiburg.

Returning to the United States, he was named a fellow at Boston University’s Human Relations Center. The center was run by Ken Benne and Bob Chin, seminal figures in the emerging field of organizational change. He received his Ph.D. in social ethics and sociology of religions.

In 1965, Al came to Antioch College as college pastor and assistant professor of religion. Over the course of the next 28 years, he left the pastor position and expanded his teaching to include a variety of disciplines, including philosophy and law. His classes were not conducted in the traditional lecture style, but sought to involve students as co-teachers in the learning process, requiring them to present in-depth papers and to help lead class discussions.

Al was an avid long-distance runner; one of his most popular courses was entitled “Meditation and the Art of Glen Running.” As they ran through the woods each morning, striving to increase their distance and endurance, students were introduced to the history of the Glen, both human and geologic. For his 50th birthday, he invited friends to join him on a marathon run, choosing how far they wished to accompany him. Al was the only one to complete the entire 26 miles — in a snowstorm.

In addition to teaching, he played a lead role in promoting tolerance and diversity in community life. In 1983, he established the Friday Forums on Public Issues, insisting on a format that included panelists who could offer informed and articulate views on competing sides of an issue. After panelists presented their ideas, the audience was invited to join in the dialogue. It was his hope that the forums would enable people to understand other points of view on some of the most pressing issues of the day, and perhaps even find that they had changed as a result.

As part of his commitment to fostering dialogue, Al sponsored an evening program in which two friends — Eric Friedland, a Jewish scholar, and Wael Asmeh, a member of Mercy Mosque — discussed how they had found common ground through the course of their own conversations. Over the years, he also taught classes on both the Bible and the Quran, hoping to ground students in the sources of the two religions to better inform them as public citizens.

After he retired from the faculty in 1993, Al became active in the Tecumseh Land Trust, serving as president from 1996 to 1999. His law background proved useful as he helped farmers and other landowners in the area craft conservation easements to preserve their land. He was also a leader in the grassroots effort to save Whitehall Farm, turning his home into a clearinghouse of “benevolent anarchy.” People would call Al to see if it would be OK to conduct a particular activity to raise money; the answer was always “yes.” His openness and encouragement allowed everyone to get involved, each finding a way to make their own contribution.

In 2006, he was asked to give the invocation at Antioch’s graduation. His words express who he was: “Do you hear voices arising from these grounds?” he said. “Tecumseh, earth our mother, birds … . Wherever you go listen to others’ songs, make them your own, compose your own songs and sing, sing, sing.”

Having devoted his life and career to Antioch College, Al worked diligently in his retirement to help it reopen and thrive. After serving on a task force created to recommend what form of community governance the new college should adopt, he reached a conclusion in keeping with his commitment to change and inclusivity. “There have been many Antiochs,” he wrote. “Each Antioch was a response to the challenges of its era, and the constant among these variables is an ethical center, expressed in Horace Mann’s humanistic plea and the Honor Code’s balance of freedom and respectful responsibility.” Rather than defending past traditions, the task force proposed only a “rudimentary starting structure” for a new community government. “We trust the people in this new Antioch,” he concluded, “to find their own way to create their own community and governance structures and processes.”

For many years, in his own studies and in the classes he taught, Al explored the question of when to die. He thought it was possible to live too long, consuming scarce resources in a world in which so many are struggling to survive. “I want to make my death a protest,” he wrote, “an affirmation that Death can be good, a Friend, to be welcomed, even celebrated.” On Jan. 3, he decided the time had come, and he began his fast.

He was preceded in death by his parents; a sister, Jean Sherwood; and his first grandson, Nigel Mitchell. He is survived by his wife, Donna; his four children, Todd (Mariatte), Donn (Nora), Linnea, and Matthew (Karen); his sister, Elizabeth Ann Phillips; and his eight grandchildren, Eva and Erika Denman, Alex and Sam Kim Denman, Nathan Mitchell, Lindsley Kinser, Kirsten and Madeline Denman.

An ice cream social in memory and celebration of Al will be held Sunday, Jan. 27, 1–3 p.m., at the Antioch College South Gym in the Wellness Center. Drop by anytime to celebrate, grieve and share a memory with friends — there will be a place to leave/write notes. A structured memorial service will be held March 23.