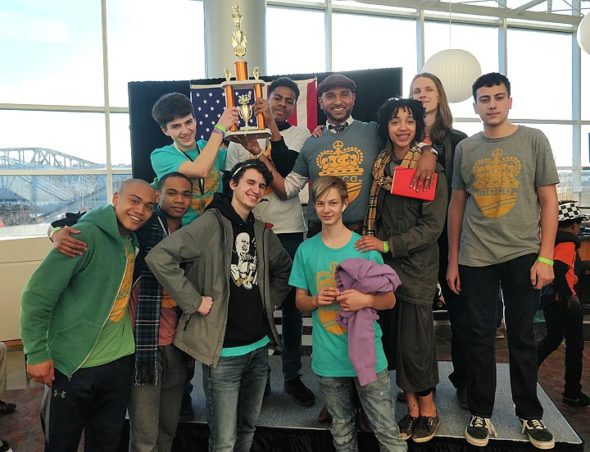 By Aurelia Blake and Megan Bachman

Right now in this peace-loving village, battles are waging in the form of a 1,000-year-old military game. No, not the animated, simulated gory gun battles of modern video games, but a noisy game of classical chess.

Many local youth took to the game eight years ago, when a 25-year-old Omar Durrani — known as Mister Omar — first started teaching chess around town in school and at after-school programs.

The unique teacher who imparted life lessons along with chess maneuvers is still at it, now appearing by FaceTime to coach Yellow Springs chess players at a distance from his current home of Boca Raton, Fla.

Mister Omar’s Chess Academy is now seeking new players, grades 3–12, including those interested in competing as a member of the “Yellow Springs Kings” team at this year’s Queen City Classic tournament in Cincinnati in March.

A free training session for those interested in playing will be held Saturday, Feb. 23, from noon to 4 p.m. at the Emporuim.

One team member, Yellow Springs High School senior Sulayman Chappelle,  speaks fondly of his chess mentor, who he first met at a Mills Lawn Elementary after-school chess program. In a recent interview, Chappelle reflected on how Mister Omar helped local students of diverse backgrounds bond over the game of chess. He also taught him that in the game of chess, “there is no place for ego.”

“Mister Omar taught me that there is no reason to have pride,”  Chappelle said. “You have to be willing to lose a thousand games to win one.”

The respect is mutual.

“Sulayman has been a force for keeping chess and the momentum going in Yellow Springs,” Durrani said in a recent phone interview. “He even has chess sleepovers, because he loves the game.”

If fact, it was Chappelle who coaxed his coach back ahead of last year’s Queen City Classic. Arriving just three months before the tournament, Durrani led the Yellow Springs team to a first-place finish in the competition among nonrated teams. The Queen City Classic is an annual event in Cincinnati that draws 700 chess players from across the country.

It was easy for Durrani to jump back into the chess community he created here and lead his team to victory.

“It was the spirit of the seeds I planted years ago,” Durrani said of the unlikely win.

Most of the 2018 team has graduated, but the current high schoolers are intent on returning to the tournament with their coach, Mister Omar.

In 2010, Durrani, a Wright State undergraduate student, arrived in Yellow Springs and began teaching chess in the Mills Lawn After-School Enrichment Program. After a successful year engaging numerous students, he held his first summer chess camp at the Emporium.

From 2010–2014, Kurt and Ruth Miyazaki invited Durrani to host an enclave of school-agers in the Emporium for summer and winter chess camps, and after-school instruction.

In part to model the virtues of respect, courtesy and humility, Durrani asked his students to address him not by his first name, but by the more formal title, Mister Omar. From that moniker came Mister Omar’s Chess Academy, or MOCA.

Durrani’s own journey with chess began in Columbus at age 13, when he placed third in a state chess tournament. The performance earned him an automatic entrance at the national tournament later that year, but he wasn’t allowed to go. It was a decisive moment in his life,

“When I was a kid, I never had this opportunity,” he said, referencing his Yellow Springs players. “Chess was snatched away from me.”

Durrani picked up the game at age 7, learning chess before he learned how to speak English fluently. Born in America but raised in India, Durrani taught himself to play using a family set made from antique ivory.

“Chess is part of my heritage,” Durrani said.

During his last few quarters at Wright State University, an opportunity to teach chess as a part of the Mills Lawn After-School Enrichment Program arose.

Those local students then followed their chess teacher into the quietude of the Emporium, where sometimes up to 20 elementary school students sat hunched over roll-up chess boards in hot pursuit of their opponents’ kings.

After a successful first year teaching chess, Durrani started his own chess academy, then held his first summer chess camp at the Emporium for grades K–8. He was then asked by M.J Richlen, then-manager of the Antioch School, to conduct a school-wide chess residency, where he taught the whole school how to play chess in a three-week term.

Many of those youth are now in high school and grateful to have been introduced to the game. When sophomore Sam Foster was 9 years old, he experienced hyperactivity and was at times emotionally explosive in school, he recalls. Durrani coached him for four years, and it had a noticeable impact.

“Chess calmed me down and helped me to focus,” Foster said recently. “I developed critical thinking skills that I’ve used in other strategy games, like Risk.”

“Chess taught me how to learn and use strategies,” Lara-Woodburn said. “No game was ever the same. It was fun, but Mister Omar made it an education.”

A few years ago, Durrani moved to Florida for graduate school. With an MBA, he now works as an analyst at Office Depot Headquarters and is married with a daughter. But his coaching hasn’t stopped, thanks to Sulayman Chappelle.

Chappelle has two goals before he finishes high school. The first is to play in the 2019 Queen City Classic Tournament in March. The second is to finish his senior project, entitled, “Pass It On,” an eight-week chess residency for Mills Lawn third-graders.

Emulating his mentor, Mister Omar, Chappelle intends to show that love is infectious, even in the battle of chess, he said. Asked how he plans to keep a large group of elementary students quiet, he mused about the game’s ultimate purpose.

“You don’t want a quiet group … that’s so mechanical and boring. If it is not fun, then why?”

Those interested in joining Mister Omar’s Chess Academy can email Duranni at OmarWillSpeak@gmail.com.