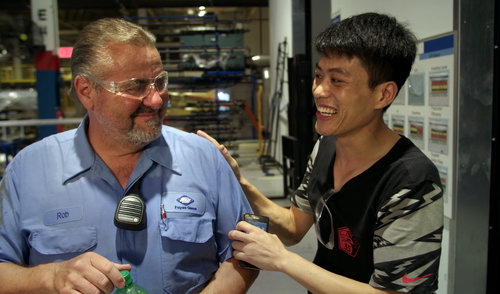 Rob Haerr & Wong He appear in American Factory by Steve Bognar and Julia Reichert, an official selection of the U.S. Documentary Competition at the 2019 Sundance Film Festival. Courtesy of Sundance Institute | photo by Ian Cook

‘American Factory’ to be released on Netflix Aug. 21

The new documentary, ‘American Factory,’ a documentary by local filmmakers Steve Bognar and Julia Reichert, will be released on Aug. 21 on Netflix, it was announced this week.

Produced by Participant Media, the film was picked up by Netflix and Higher Ground Productions, the new production company of Barack and Michelle Obama. The film is the first to be released by the former president and first lady’s new company.

“American Factory” tells the story of cultural and political clashes after a Chinese billionaire in 2014 bought a shuttered former General Motors factory near Dayton, bringing in Chinese workers and supervisors to work alongside former GM employees. During the following three years, the documentarians filmed as workers struggled to understand each other and adjust expectations as to how to work together.

“It was an epic adventure,” Bognar said of the drama and complexities the film captured in an interview with the News earlier this year.

“American Factory” has garnered glowing reviews. According to New York Times critic Manohla Dargis, the film is one of “the two most powerful documentaries at the festival.”

“It can be startling what happens when documentarians are granted the kind of extraordinary access that Bognar and Reichert managed to get,” Dargis wrote in February.

“American Factory,” the latest doc by filmmaking team Steven Bognar and Julia Reichert, is a documentary masterpiece — plain and simple. This is an exhilarating, impressive-in-every-way film that rivals the work of Frederick Wiseman, utilizing a similar style with impressive amounts of fly-on-the-wall footage.”

Together, the filmmaking duo have produced a slate of award-winning films over the years, including the Oscar-nominated short “The Last Truck: The Closing of a GM Plant” from 2010 and “A Lion in the House,” which won an Emmy in 2007. Reichert, who is currently being honored with a retrospective of her career at MOMA, also received the career achievement award from the International Documentary Association, or IDA, last year.