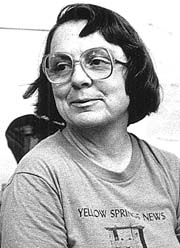 A friend and neighbor on the scene Wednesday morning reported that Champney was walking and talking with the responding medics, who transported her to Greene Memorial Hospital.

Champney, who lives in an intentional community known as The Vale, was reported missing about 9 p.m. Tuesday, after family members were unable to locate her at home earlier in the evening, although her car was parked outside.

Miami Township Fire-Rescue and Yellow Springs Police, along with family, friends and neighbors, assisted the Greene County Sheriff’s Office in an initial search of the immediate area, according to Altman.

Search dogs from the Beavercreek Police Department, aerial drones from Xenia Police and Fire and a helicopter from the Ohio State Highway Patrol were then brought in as the search for Champney, a long-time and beloved community member, continued past midnight. For safety reasons, search efforts were then suspended about 1:10 a.m., with plans of resuming in daylight.

Altman said that about 50 personnel from multiple area law enforcement and fire-rescue agencies had gathered Wednesday morning to begin searching anew when they got the 911 call reporting Champney had been found in the woods near Funderburg Farm on East Hyde Road, more than half a mile from her home.

Halker, who located Champney and called authorities, reportedly had heard that she was missing and went searching on his own at first light Wednesday morning.

According to Chief Altman, “she was suffering from exposure to the cold and minor injuries from an apparent fall.” MTFR medics assessed and treated her injuries before taking her on to Greene Memorial. Altman reported that Champney was transported “in good condition and spirits.”

YS Police Chief Carlson said that Halker will be honored as a Yellow Springs Citizen Hero.